For Immediate Release
Office of the Press Secretary
April 16, 2007

THE PRESIDENT: Thank you all. Please be seated. Welcome to the White House. You know, I get to welcome a lot of guests here. I don't think there's a more important guest than a veteran or the family of a serviceman or woman, or the families of those whose loved one has given their life to the country. And so I welcome an incredibly important group of guests. And thank you for coming, and thank you for your time. 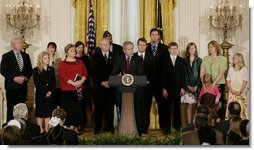 I appreciate very much to be in the presence of moms and dads, husbands and wives, sons and daughters of some of the finest citizens our nation has ever produced. I want to thank the leaders of organizations that support our military families. I appreciate your tireless work to send a clear signal that many in the United States of America support our troops. Each of you knows what is stake -- what is at stake in this war on terror. And I appreciate your efforts to rally our nation to support our troops, and to support the mission for which they have risked and, in some cases, have given their lives. I thank you for coming. Thanks for your service to the United States of America.

Many of the families here today have relatives serving in harm's way. Others have lost loved ones in the struggle. They have come here to Washington with a message for their elected leaders in our nation's capital: Our troops need the resources, equipment and weapons to fight our enemies. Congress needs to pass an emergency war spending bill, without strings and without further delay.

On Wednesday, I will meet with congressional leaders from both parties right here at the White House. I'm going to pass on your message to them.

I appreciate members of the Families United for Our Troops and Their Mission. Thanks for doing what you do. I want to thank the members of the Armed Forces Foundation, and those who serve with our Veterans Service Organizations.

A time of war is a time of sacrifice for our nation, but especially for our military families. Being left behind when a loved one goes to war is one of the hardest jobs in our military. The families here today inspire our nation -- inspire them with their sense of duty and with their deep devotion to our country.

The families gathered here understand that we are a nation at war. Like me, they wish we weren't at war -- but we are. They know that the enemies who attacked us on September the 11th, 2001 want to bring further destruction to our country. They know that the only way to stop them is to stay on the offense, to fight the extremists and radicals where they live, so we don't have to face them where we live.

The families gathered here understand that our troops want to finish the job. Today, because of email and instant messaging and other modern technologies, our military families are able to stay in contact with their loved ones overseas. I see some baby boomers out there; when they wore our uniform you never would have imagined emailing a loved one in the midst of your time overseas. But that's what's happening today. Families here know what our troops are seeing and hearing on the ground, they get instant feedback as a result of modern technologies. And they know better than anyone our troops' desire to succeed and their determination to prevail. 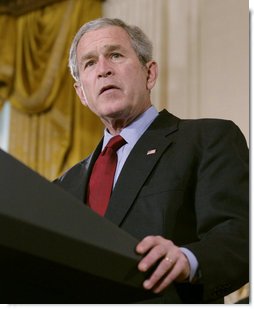 Families gathered here understand that America is not going to be safe until the terrorist threat has been defeated. If we do not defeat the terrorists and extremists in Iraq, they won't leave us alone -- they will follow us to the United States of America. That's what makes this battle in the war on terror so incredibly important. One of the lessons of September the 11th is what happens overseas matters to the security of the United States of America, and we must not forget that lesson.

The consequences of failure in Iraq would be death and destruction in the Middle East and here in America. To protect our citizens at home, we must defeat the terrorists. We defeat them by staying on the offense and we defeat them by helping young democracies defeat their ideology of hate. And it's hard work. But it is necessary work, and thousands of men and women who wear our uniform understand the stakes.

It's a remarkable country, isn't it, where people stand up and volunteer to serve the United States in uniform during a time of war. And, yet, that's who we honor here today.

We must give our men and women in uniform the tools and resources they need to prevail. Providing these resources is the responsibility of the United States Congress. And that is why, 70 days ago, I sent Congress an emergency war spending bill that would provide the vital funds our troops urgently need. But instead of approving this funding, Democrats in Congress have spent the past 70 days pushing legislation that would undercut our troops. They passed bills in the House and the Senate that would impose restrictions on our military commanders. They set an arbitrary date for withdrawal from Iraq. And they spend billions of dollars on domestic projects that have nothing to do with the war. After passing these unacceptable bills, House and Senate leaders then chose to leave town for spring recess, without resolving their differences or sending any legislation to my desk.

As Congress delays, the clock is ticking for our troops. Last week, Secretary of Defense Gates wrote to Congress, laying out the consequences of their failure to pass emergency spending for our troops on the front lines. He warned that because Congress has not acted, "The Army will soon begin reducing quality of life initiatives, reducing the repair and maintenance of equipment necessary for deployment training, and curtailing the training of Army Guard and Reserve units within the United States, reducing their readiness levels." He continued that if emergency funding is not received by mid-May, "the Army will have to consider further actions, to include reducing the pace of equipment overhaul work at Army depots, curtailing training rotations for brigade combat teams currently scheduled for overseas deployment," a step that that the Secretary said, "would likely require the further extension of currently deployed forces." In other words, there are consequences for Congress' delay in getting our troops that the Defense Department has requested. 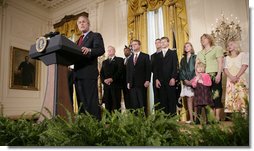 Listen, I understand Republicans and Democrats in Washington have differences over the best course in Iraq. That's healthy. That's normal. And we should debate those differences. But our troops should not be caught in the middle. Last week, the Senate returned to Washington, and this week the House has returned, as well. I've invited congressional leaders of both parties to meet me at the White House two days from today. That's what we're supposed to do. We're supposed to talk out our differences. I'm looking forward to the meeting. I hope the Democratic leadership will drop their unreasonable demands for a precipitous withdrawal. We've only committed about a little over half of our troops into a decision I made to help secure the Iraqi capital -- and, yet, there are some saying we ought to leave before we get there.

I think it is wrong for Congress to restrict our military commanders. I can understand having a difference of opinion about Iraq, but our commanders need the flexibility necessary to meet the mission. We should not be substituting political judgment for the judgment of those in our military. And the idea of putting, you know, peanut storage -- which may be necessary at some point in time; I don't know, I haven't analyzed the peanut storage issue, but I do know it doesn't have much to do with about making sure your loved ones get what's needed to do their job.

I am willing to discuss any way forward that does not hamstring our troops, set an artificial timetable for withdrawal, and spend billions on projects not related to the war. The American people expect their leaders in Washington to find common ground; but they also expect the Congress and the White House to work together to make sure our troops get funded quickly. We should not legislate defeat in this vital war.

We owe it to our men and women in uniform to give them the full support. It's important as people debate this issue to think about somebody like Merrilee Carlson, with us today. She's a Gold Star Mom. Two years ago, Merrilee's son, Michael, gave his life in Iraq when his platoon was on a night mission to take out two terrorist bomb-making factories. As they approached their target, they passed over a culvert that gave way, and their Bradley fighting vehicle plunged into the water and Michael and four others in the vehicle died that day.

We owe it to the brave Iraqis. I just spoke to the Prime Minister; I told him I was coming to see you. He said, please thank the people in the White House for their sacrifices and we will continue to work hard to be an ally in this war on terror. We'll continue to do the hard work necessary to help change the conditions that caused 19 young men to get on airplanes to come and kill thousands of our citizens on September the 11th.

We owe it to every sailor, soldier, airman, Marine in harm's way to give them the tools they need to prevail. That's what we owe them.

As we saw with last week's brutal attack on the Iraqi parliament, our troops face depraved and determined enemies -- enemies that could just as easily come here to kill us. And, therefore, we must give our men and women in uniform the best equipment, the best training, and the unqualified support of our nation.

Congress needs to put the partisanship on hold; it needs to get rid of all the politics right now and send me an emergency war spending bill that I can sign that gets our troops the support they need and gives our commanders the flexibility they need to complete this mission.