For Immediate Release
Office of the Press Secretary
April 13, 2007

THE PRESIDENT: Thank you all; please be seated. Good morning. Thank you. It's good to be with you. You know how to make a Methodist feel right at home. (Laughter.) I noticed that this year's breakfast was the Friday after Lent -- (laughter) -- you can eat your bacon in good conscience. (Laughter.) And the priests can relax. (Laughter.) 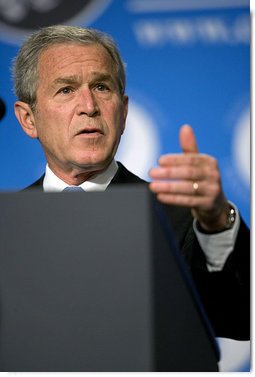 I appreciate the opportunity to be with you, I really do. I thank you for having this prayer breakfast. Prayer breakfasts show the true strength of our nation. I am honored that people say to me and Laura, "We pray for you." It means a lot. A prayerful nation is a strong nation. A prayerful nation is a nation, the true strength of which lies in the hearts of the men and women of our nation.

Our Declaration of Independence states that our freedom rests on self-evident truths about the dignity of the human person. Throughout our nation's history, Catholic Americans have embraced, sustained, and given their lives to defend these truths. This morning, we give thanks for the blessings of freedom, and we ask Almighty God to guide us as we renew our founding promise of liberty and justice for all.

I'm sorry Laura couldn't be here. She is by far the best representative of our family. Thank you for praying for her.

I appreciate my friend, Leonard Leo, for inviting me. I thank the leaders of the National Catholic Prayer breakfast. I'm honored to be in the presence of Archbishop Donald Wuerl. I have known the Archbishop for quite a while. I appreciate his strong and firm dedication to making sure every child in America gets a good education. (Applause.) I am proud to be here with Archbishop Sambi, the Apostolic Nuncio to the United States. I appreciate the members of the Catholic clergy. I am honored to be here with two members of our Supreme Court, the Chief Justice John Roberts and Justice Sam Alito. (Applause.)

I thank the members of my administration who have joined us, particularly our Cabinet Secretary of the Department of Veterans Affairs, Jim Nicholson, and Suzanne, thank you for joining us. (Applause.)

I am in awe of people like Corporal Michael Blair, United States Marine Corps. (Applause.) I thank the members of our Armed Services who are here today. I appreciate the members of Congress who have joined us. Thanks for letting me come by to say, hello. (Laughter and applause.)

Of the 56 men who signed our Declaration of Independence, only one was a Catholic -- Charles Carroll. In 1776, Carroll was one of the wealthiest men in America. But because he was a Catholic, he could not vote or hold public office in his native Maryland. John Adams noted that Carroll's wealth and patriotism marked him for special vengeance if the Revolution were to fail. That is why when Carroll added his name to the Declaration, one bystander said: "There go a few million." (Laughter.) 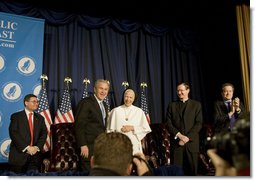 Carroll was willing to risk those millions because he knew that something far more precious was at stake: freedom. He believed that the self-evident truths of our Declaration would lead to religious as well as civil liberty. He knew that an America where people were free to worship God as they saw fit would be a land where Catholics would flourish and prosper. And he understood that whatever America's failings, our founding promise would always be a source of hope and renewal for our country. And at this breakfast, we commit ourselves to renewing that promise in our own time.

Renewing the promise of America begins with upholding the dignity of human life. (Applause.) In our day, there is a temptation to manipulate life in ways that do not respect the humanity of the person. When that happens, the most vulnerable among us can be valued for their utility to others -- instead of their own inherent worth. We must continue to work for a culture of life -- where the strong protect the weak, and where we recognize in every human life the image of our Creator. (Applause.)

Renewing the promise of America requires good citizens who look out for their neighbors. One of the reasons that I am such a strong believer in the power of our faith-based institutions is that they add something the government never can, and that is love. (Applause.) Pope Benedict the 16th put it this way in his first letter as Pope: "There is no ordering of the state so just that it can eliminate the need for a service of love." In parishes and neighborhoods across our nation, Catholics take this call to heart -- and that is why we find so many of you leading America's armies of compassion. You are changing America one heart, one soul at a time, and I thank you. (Applause.)

Renewing the promise of America also includes ensuring a sound education for every single child. America's Catholic schools play a vital role in our nation. The schools were built by poor immigrants, they were staffed by legions of dedicated nuns, brothers, and priests -- and they have given millions of Americans the knowledge and character they need to succeed in life. Today, these schools are also serving thousands of non-Catholic children in some of nation's poorest neighborhoods. I appreciate the tremendous sacrifices that many dioceses are making to keep their inner-city schools going. I am worried that too many of these schools are closing -- and our nation needs to do something about it. (Applause.) 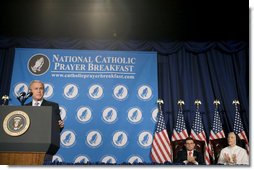 This afternoon I'll hold a meeting at the White House to discuss the difference America's parochial schools are making in the lives of some of our neediest children. We see that difference right here in the nation's capital. Pam Battle sat with Laura during my State of the Union address. She's a mom of two, Carlos and Calvin. A few years ago, these boys were in a public school that was not meeting Pam's expectations. We passed what's called the D.C. School Choice Incentive Act -- many of you in this room helped get that act passed. As a result of that act, her boys were able to transfer to Assumption Catholic School -- a parochial school that serves an almost entirely African-American student body.

Carlos became an A-student and president of his 8th grade class. He now attends high school at Georgetown Day. Calvin is a 5th-grader at Assumption -- I'm told he's running for "Student of the Month." (Laughter.) Something I never achieved. (Laughter and applause.)

Pam has a big smile on her face when she comes to talk about the education her boys are receiving. "The main benefit of this program is that I can drop off my sons at school with peace of mind. It's safe, and I know they are working up to their level." That's what Pam said. I believe every parent in America should have that same peace of mind -- and every school in America should ensure its students are working to their fullest of potentials. I applaud our nation's Catholic schools. I will continue to work to help these schools reach more children in need, so that our children have the skills they need to realize the full promise of the United States of America.

Finally, to realize the promise of America, we must have comprehensive immigration reform that enforces our laws and upholds the dignity of every single person in the United States. (Applause.) And now is the time for the United States Congress to get a bill to my desk that I can sign. (Applause.)

I thank you for your fine tradition. I applaud you for the love of neighbor you show through your organizations and your churches. I ask that you pray for our soldiers and their families in harm's way. And I ask that you pray that in a troubled world, America may always remain a beacon of hope and of freedom.