For Immediate Release
Office of the Press Secretary
April 12, 2007

THE PRESIDENT: I have just had what I consider to be not only a fascinating meeting, but an important meeting about the No Child Left Behind Act with leaders of the civil rights movement, education leaders from around our country, business leaders who are concerned about America's competitiveness. 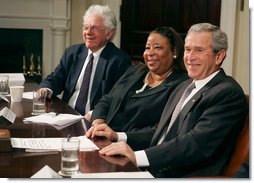 There is a universal belief that the No Child Left Behind Act needs to be reauthorized, and I want to thank you all for working with us to get this piece of legislation reauthorized.

I believe the No Child Left Behind Act needs to be reauthorized because it's working. It's a piece of legislation which believes in setting high standards and using accountability to make sure that every single child gets a good education. I strongly support the notion that when we find a child falling behind that there ought to be extra federal help so that child can catch back up early, before it's too late.

I strongly condemn an achievement gap that exists in this country. It's a gap between Anglo students and Latino students, or white students and black students -- and it's not in our country's interest to allow an education system to continue to foster that difference in achievement. The No Child Left Behind Act is beginning to close that gap. It's the impetus necessary to cause the reforms, the curriculum changes necessary to make sure every child has a chance of realizing the great hopes of our country.

Reauthorizing No Child Left Behind Act is an important state, an important move; it's an important piece of legislation necessary to keep this country not only competitive, but also a country of great hope. And so I want to thank you all for joining us.

I also want to comment on today's bombing of the Iraqi parliament. First of all, I strongly condemn the action. It reminds us, though, that there is an enemy willing to bomb innocent people in a symbol of democracy. In other words, this assembly is a place where people have come to represent the 12 million people who voted. There is a type of person that would walk in that building and kill innocent life -- and that is the same type of person that is willing to come and kill innocent Americans. And it is in our interest to help this young democracy be in a position so it can sustain itself and govern itself and defend itself against these extremists and radicals.

Our hearts go out to those who suffered as a result of this bombing. My message to the Iraqi government is we stand with you as you take the steps necessary to not only reconcile politically, but also put a security force in place that is able to deal with these kinds of people.