For Immediate Release
Office of the First Lady
April 12, 2007 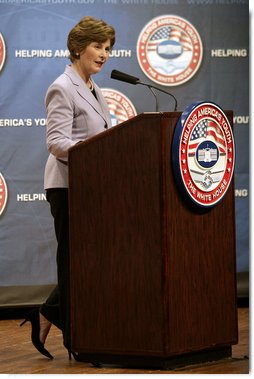 Lieutanent Governor Ramsey and Sindy, thank you all for joining us today, and a special thanks to Dr. Melvin Johnson, the President of Tennessee State University. Thank you very, very much. (Applause.)

I'm very happy to have this chance to be here today with each of you and to actually have a mic in Nashville. (Laughter.) Don't worry. Most of all, I'm delighted to be with so many distinguished community leaders for this, which is our third regional conference on Helping America's Youth. The work you do in your communities, helping young people build the knowledge and the self-respect they need to lead successful lives is at the heart of Helping America's Youth.

President Bush announced the Helping America's Youth Initiative at his 2005 State of the Union address, and he asked me to lead it. So over the last two years, I've traveled throughout the United States, visiting with young people and with the adults who are so important to their lives. I've been to schools and to after-school programs. I've met with mentors and Big Brothers and Big Sisters. I've visited sports programs, a debate program in Atlanta, gang-intervention programs in Los Angeles and Chicago.

All of these visits led to the White House Conference on Helping America's Youth in October 2005, and then to the first two regional conferences in Indianapolis and Denver. At the White House conference, we introduced an online, interactive Community Guide, which helps concerned adults learn more about their own communities. If your local law enforcement has mapped your crime statistics, then the guide will show which neighborhoods have the most youth-related problems, and what local resources are available to address these problems.

Many of you were here yesterday, and you learned how to use the guide. The guide is continually updated, it's user friendly, and it has resources that help concerned citizens join with local youth groups to build community partnership. The guide's interactive map lets users enter their own zip codes, find demographic data about the young people in your neighborhood, and then locate federally supported youth programs nearby.

And the guide's "program tool" helps adults find the youth initiatives that research has proven are effective in reducing substance abuse, gang activity, and other risk factors faced by young people.

The Community Guide is available on the Helping America's Youth Website, which is www.helpingamericasyouth.gov -- that's g-o-v. The site also features live and archived webcasts -- and, in fact, today's conference is being streamed live on the web. So this gives me a chance to say hello to the groups around Tennessee, Mississippi, and Georgia who are meeting today to watch this conference as it goes on.

I encourage each of you to go to the website to watch the other conferences, to use the Community Guide. Through the guide and through these regional conferences, we're trying to make Helping America's Youth more local, so that we can work directly with community leaders to address the unique challenges facing young people in the United States.

And these challenges are far greater today than they were for children just a generation ago. Drugs and gangs, predators on the Internet, violence on television and in real life are just some of the negative influences present everywhere. And as children face these dangers, they often face them with fewer people to turn to for help. More children are raised in single-parent families, most often without a father. Millions of children have one or both parents in prison. Many boys and girls spend more time alone or with their peers than they do with any members of their family.

This afternoon, we'll hear about the challenges particular to children and teens in the South. In Appalachia, for example, young people face a crisis of education. Appalachia lags behind the rest of the nation in the percentage of high school students who go to college, yet 78 percent of the jobs in our fastest-growing industries require college education. Today, we're joined by representatives from the Appalachian Higher Education Network, which helps thousands of young seniors in eight states pursue higher education.

Before the network began working at these schools, only 50 percent of the students went on to any post-secondary education, but just one year later, the number has climbed to 64 percent --close to the national average. Congratulations to the network. (Applause.)

In Oscar's hometown, and across the Gulf Coast, young people need the stability of home, community, and school as they recover from the hurricanes. You've already heard from Oscar about Caf Reconcile, which I visited when I was in New Orleans this January. In the weeks after the hurricanes, Caf Reconcile served hot meals to first responders, construction crews, and local workers. Caf staff welcomed back area evacuees one plate of red beans and rice at a time.

And as Caf Reconcile staff help New Orleans rebuild, they give local youth on-the-job training for restaurant careers, as well as the support and the self-esteem they need to become successful adults.

At this crucial time in our nation's history, we're also concerned about the children of our men and women in uniform -- here in the South, and across our country. Today, I'm looking forward to hearing more about Operation Purple, which runs summer camps for the children of our deployed troops.

In addition to offering traditional horseback rides and hiking and campfires, Operation Purple helps campers deal with having a mom or a dad in harm's way. Campers meet hundreds of other children going through the same challenges, and they build a network of friends so they can lean on each other while their moms or dads are deployed. One Operation Purple camper wrote: "When the week was over, I didn't want to leave. After camp, I had a lot more confidence that I can get through having a parent away."

The difficulties confronted by our military kids are among many great challenges facing America's young people. But greater still is our love for our children, our hope for them, and our dedication and the dedication of millions of Americans to helping young people succeed.

To make sure every child is surrounded by positive influences, even more adults must dedicate themselves to Helping America's Youth. Adults need to become aware of the challenges facing children, and take an active interest in their lives. Adults, and especially parents, should be reminded that they teach their kids healthy behavior by their own good example.

Across our country, I've seen how adults from every part of the community can make a difference in the lives of young people. In June 2005, I visited CeaseFire Chicago, which has revolutionized the city's approach to eradicating youth violence. Instead of relying entirely on law enforcement, CeaseFire mobilizes whole communities to address the conditions that lead to violence and shootings. Violence-prevention coordinators bring together police, youth organizations, members of the clergy, community members, and parents through broad public education campaigns.

CeaseFire's model is so successful that cities around the country are adapting it to their own communities. And when I attended a CeaseFire Summit in Chicago two weeks ago, one resident after another spoke of the difference CeaseFire is making in their lives. Neighborhoods used to be so violent that one man said, and I quote, "I have so many obituaries in my house, I can't even count them."

But the program's founder, Dr. Gary Slutkin, explains that now, and I quote again, "a lot of people in these same neighborhoods want to grow up to be CeaseFire workers." CeaseFire Outreach Workers are even "followed around like Pied Pipers because these kids are so hungry for a good example."

Right here in Nashville, caring adults set a good example for young people at Rocketown, which was founded in 1994 by musician Michael W. Smith. Every week, about 1,300 kids go to Rocketown for healthy after-school activities, like film editing, songwriting, skateboarding, and dance. Teens struggling with abuse, neglect, and peer pressure receive adult guidance from mentors, who aren't too grown up to join the kids at Rocketown's coffee bar and studios and skate park.

These mentors help Nashville's young people develop into healthy and productive adults -- young people like Bobby and Saxon. In August, these two brothers, ages 11 and 13, began coming to the Rocketown Skate Park. Rocketown staff soon learned that the boys walked every day between the skate park and home -- a route that covered miles, and traversed rough neighborhoods -- just so they'd have some place to go, something to do, and some friends to spend time with.

Rocketown staff arranged to give the boys rides between the skate park and their home. And that's when they learned why these brothers were so determined to spend time at Rocketown. Their parents were both unemployed, and they were struggling with substance abuse. The family's home lacked running water, and there was very little to eat in the house.

Now, with help from Rocketown, Bobby and Saxon's family has moved into suitable housing. They receive assistance for groceries so the growing boys can receive nutritious meals. Rocketown often partners with a local church to provide services -- and this church now provides the boys' parents with counseling. The church has helped them find jobs so they can enjoy the dignity and the self-respect that comes with employment. And the boys' parents are also learning how to read so they'll be able to provide for their children long term.

And since Bobby and Saxon's parents work third shift, Rocketown makes sure the brothers are supervised in those critical after-school hours. Rocketown staff are always there for the boys -- talking with them about school, working with them on family issues, and providing the stability, the support, and the positive adult guidance that all children want and need.

The boys have become especially attached to Rocketown's Outreach Director, Ben Cissell. Ben is showing Bobby and Saxon that while their past may have been difficult, their future holds infinite promise.

If you ask Saxon why he likes Rocketown, he'll say that it's "awesome." Michael W. Smith explains his program a different way. He says, "We've had one success story after another. At-risk kids keep coming to Rocketown, because they feel like they're loved here. The staff knows them by name. We've even had a couple of these kids, who were on the verge of getting in trouble, end up being on the staff. Now these kids have a chance."

Michael says he started Rocketown because otherwise, "Who's going to rescue these kids?" Across the country, many dedicated adults are stepping forward to guide young people away from risky behavior, and toward happiness and success. Thanks to each and every one of you for doing this important work in your communities. As you've heard throughout this conference, young people want us in their lives, and they need us in their lives. And as I've learned from the remarkable men and women I've met across our country, each of us has the power to help America's youth.

Thank you all very, very much for coming today. Thank you for your commitment to young people. May God bless you.