For Immediate Release
Office of the Press Secretary
April 2, 2007

THE PRESIDENT: Welcome to the Rose Garden. It seems to me that this is becoming a spring tradition. (Laughter and applause.) For the fourth year in a row, the football team from the Naval Academy is here to receive the Commander-in-Chief Trophy -- the Rose Garden shall be called "the yard." (Applause.) 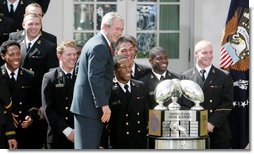 This year's team was among the Navy's best ever. That says a lot. This is a team that had the most rushing yards in the nation. That says a lot. You had the highest graduation rate of any football team in the country. That says even more. You went 9 and 3, you made it to the bowl game and you beat Army.

I thank you all for coming. I appreciate members of the administration who have joined us: Deputy Secretary of the VA, Gordon Mansfield; Secretary Don Winter, of the Navy; General Pete Pace, Chairman of the Joint Chiefs of Staff -- and, I might add, the first Marine to serve in that capacity; Admiral "G," Ed Giambastiani -- that's hard for a Texan to say, but it's not hard to tell you how much I admire Admiral "G" and Pete Pace; Admiral Mike Mullen, Chief of Naval Operations, thank you for coming, Chief; General Jim Conway, Commandant of the Marine Corps; and Ellen Moyer, the Mayor of Annapolis. We are glad you all are here and Mayor, thanks for coming.

Vice Admiral Rod Rempt -- Rod, I notice that you gathered up my speech. (Laughter.) Just remember, page three follows page two. (Laughter.) But it's good to have you again.

VICE ADMIRAL REMPT: Sir, it's a pleasure to be here.

THE PRESIDENT: Coach Paul Johnson. You talk about a winner, this guy knows how to build winners. And Coach, we're glad you're back. I'm proud to welcome you and your staff. I appreciate very much the members of the football team that have joined us, and I thank all of the Naval Academy supporters who are here.

The Navy's fourth consecutive winning season may not sound like much to people who don't follow football, but it's a remarkable feat considering that the team was 0 and 10 six years ago. They showed up 10 times, they played hard all 10 times, but they won zero times. And here they are, standing in the Rose Garden with the Commander-in-Chief. It says a lot about resilience and a lot about determination, and a lot about correcting past mistakes.

Coach Johnson has put together a really good coaching staff, and I appreciate very much, Coach, you motivating these players toward championship -- toward the championships that you've earned. The season started with three wins in a row, including a blowout over Stanford; you beat Air Force in Colorado Springs; you beat Army by 12 points, the fifth win in a row for the Naval Academy. They tell me that's a pretty big deal.

You earned a spot in the Meineke Car Care Bowl -- Meineke Car Care Bowl. Nevertheless, you played a big-time school: Boston College. Boston College is a football power, and it was a really great game. I watched it. I was impressed by the 322 yards you earned. I know you're disappointed with the one-point loss, but you can't be disappointed with the effort.

Your class won 35 games in four years. The only Navy class to win more games graduated in 1909. I don't know whether William Howard Taft welcomed the team in 1909, but I can tell you, the 43rd President is proud to welcome such champions here to the Rose Garden.

One of the reasons your team was so successful this year, of course, is because you had a captain from Texas. (Laughter.) Five different Navy players rushed for more than 100 yards in a game this season. That's more than any other team in the nation. That's called a well-balanced attack.

I appreciate the fact that one of your quarterbacks stepped in for an injured starter, and went on to score four touchdowns in a single game. I would like to say his name, I'll probably bungle it -- I'll just say, the guy is from Hawaii. (Laughter.)

I appreciate the fact that Keenan Little became the first player in Navy history to score defensive touchdowns against Air Force and Army in the same season. I'm proud to be up here with a fellow Texan from Lewisville, Texas -- the mascot of one of the high school teams in Lewisville, believe it or not, is the "Fighting Farmers." (Laughter.) This guy was your fullback, Adam Ballard. He gained 134 yards against Air Force. When he was named MVP, he wisely -- wisely -- gave the credit to his offensive line. Smart move, Adam. (Laughter.)

You know, it's interesting -- how would you like to be the punter on the Navy team who went two full games without showing up on the field? (Laughter.) Veteto -- Greg is his first name, was, like, the punter on the team, and for two games in a row, he was never used. And, yet, I think he didn't mind.

The team had a special leader in Eddie Martin. I don't know if the country knows this, but he was diagnosed with cancer last year. He didn't play any games this year, but he always led the team out of the locker room for every home game. And so, Eddie, I appreciate the inspiration you've provided for your team and for the Academy. I know you're fighting a brave battle, and a lot of people will pray for your full recovery. 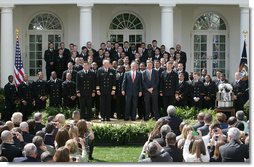 When you signed up for the Naval Academy, you signed up for more than playing football. I'm glad Coach Johnson -- I'm sure Coach Johnson was glad that you said, I want to be a football player at the Naval Academy. But you signed up to become officers in the finest military the world has ever known. And my job is to keep it that way, and I will. But you can't have the finest military the world has ever known without men and women who volunteer to wear the uniform, just like you've done.

You volunteered after September the 11th, 2001. That's a remarkable decision you have made. I vowed after September 11, 2001, that I would use the full power of our government to protect the American people from harm. And I meant what I said. And, therefore, anybody who signed up afterwards knew what they were getting into. It's a remarkable country when people make such a noble decision to serve their country in a time of war. And I'm proud to be the Commander-in-Chief of such decent, honorable, sacrificing men and women.

The lessons you have learned on the football field and at the Naval Academy will serve you well on the battlefield. You learned the importance of teamwork and leadership and strong, personal character. And you're going to put those qualities to the highest possible use, and that is to protect the American people and to lay the foundation of peace for generations to come.

The Navy and Marine Corps are on the front line of fighting and winning the war against the extremists, radicals, who would do this country harm. Every day we're on the offense against an enemy. My attitude is, I would rather defeat them over there so we do not have to face them here. And the Marine Corps and the Navy are helping to lead that charge.

The sailors and Marines on the high sea are sending a clear message to the world that we stand for strength, and we stand for peace. Former Navy football players have distinguished themselves in the line of duty. Marine First Lieutenant Brian Stann comes to mind, the class of '03. He won the Silver Star.

We also have some of the former Navy football players lose their lives: Ron Winchester of '01, J.P. Blecksmith of the class of '03. Another gave his life in flight over the Pacific, Navy Lieutenant Commander Scott Zellem, the class of '91. The United States of America will not forget their sacrifices. We will complete our missions so that their sacrifices will not have gone in vain. 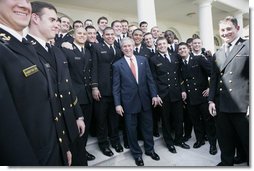