For Immediate Release
Office of the Press Secretary
March 29, 2007

THE PRESIDENT: Thank you all. Please be seated. Thank you. Madam Speaker, Mr. Leader, members of Congress, Secretary Powell, distinguished guests: You know, the Speaker and I had the honor of having our picture taken with you, and as I walked into the rotunda, a place that occasionally I get invited up here and I walk into, I was impressed by the fact that I wasn't amongst heroes who were statues. I was impressed that I was amongst heroes who still live. (Applause.) I thank you for the honor you have brought to our country. And the medal you're about to receive means our country honors you, and rightly so. 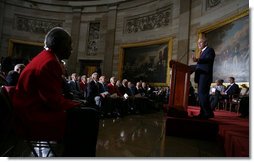 I want to thank Senator Carl Levin and Sergeant Rangel. (Laughter.) Excuse me, Mr. Chairman. (Applause.) I thank you for your leadership on this issue. I have a strong interest in World War II airmen. I was raised by one. He flew with a group of brave young men who endured difficult times in the defense of our country. Yet for all they sacrificed and all they lost, in a way, they were very fortunate, because they never had the burden of having their every mission, their every success, their every failure viewed through the color of their skin. Nobody told them they were a credit to their race. Nobody refused to return their salutes. Nobody expected them to bear the daily humiliations while wearing the uniform of their country.

It was different for the men in this room. When America entered World War II, it might have been easy for them to do little for our country. After all, the country didn't do much for them. Even the Nazis asked why African American men would fight for a country that treated them so unfairly. Yet the Tuskegee airmen were eager to join up.

You know, I'm interested in the story about a young man who was so worried that the Army might change its mind about allowing him to fly, that he drove immediately to the train station. He left his car, as well as $1,000 worth of photography equipment. He never saw his car, he never saw his camera, but he became a flyer.

These men in our presence felt a special sense of urgency. They were fighting two wars: One was in Europe, and the other took place in the hearts and minds of our citizens. That's why we're here. The white commander of the Tuskegee airfield was once asked -- with all seriousness -- how do African Americans fly? -- reflecting the ignorance of the times, they said, how do African Americans fly? He said, "Oh, they fly just like everybody else flies -- stick and rudder." Soon, Americans in their kitchens and living rooms were reading the headlines. You probably didn't realize it at the time, but you were making headlines at home, headlines that spoke about daring pilots winning a common battle. 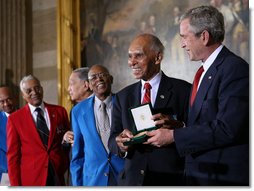 And little by little, every victory at war was translated to a victory here in the United States. And we're in the presence of men who are earning those victories, important victories, leaders who pierced the unquestioned prejudices of a different society. You gave African Americans a sense of pride and possibility.

You saw that pride and awe, I'm sure you remember, in the faces of young children who came up to you right after the war and tugged and your uniforms and said, "Mister, can you really fly an airplane?" Some of you have been in Germany and Iraq, and you still see that sense of pride.

The Tuskegee Airmen helped win a war, and you helped change our nation for the better. Yours is the story of the human spirit, and it ends like all great stories do -- with wisdom and lessons and hope for tomorrow. And the medal that we confer today means that we're doing a small part to ensure that your story will be told and honored for generations to come. (Applause.)

And I would like to offer a gesture to help atone for all the unreturned salutes and unforgivable indignities. And so, on behalf of the office I hold, and a country that honors you, I salute you for the service to the United States of America. (Applause.)