For Immediate Release
Office of the First Lady
March 29, 2007

Thank you very much, Gary. I'm so happy to be here. Dr. Slutkin and CeaseFire Chicago has been a part of all the Helping America's Youth summits. We're hosting another one in Nashville, regional summit, to talk about this program and a number of other programs that address the problems that our young people face across the country in Nashville on April 12th. So that's coming up very soon. 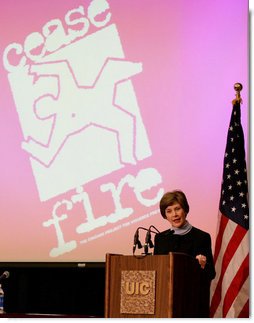 But I'm very, very happy to be here, specifically to talk about what all of us can do, along the lines of CeaseFire Chicago and CeaseFire Illinois, all around the country, in our communities everywhere.

I want to recognize Anne Belec, the President and CEO of Volvo Cars of North America, who is one of the event sponsors here. Anne, thank you and Volvo very much. Sylvia Manning, the Chancellor of the University of Illinois at Chicago, who is our host, I guess, because we're here at the University of Chicago*.

Community leaders, business executives, distinguished guests, I'm happy to be here with you today. I'm so happy to have this opportunity to talk about this specific way to reach young people and adults across the United States to stop violence, this CeaseFire program that is so important.

Since Dr. Slutkin established CeaseFire in 1995, the program has revolutionized Chicago's approach to eradicating youth violence. Instead of relying entirely on law enforcement, CeaseFire mobilizes whole communities to address the conditions that lead to violence and shootings.

Violence-prevention coordinators bring together police, youth organizations, religious leaders, and community members. Through broad public-education campaigns, these community coalitions show residents that they have a choice: They can accept shootings in their neighborhood as a way of life, or they can speak out against violence, and work to stop it.

CeaseFire sends Youth Outreach Workers onto the streets of Chicago's most dangerous neighborhoods. These Outreach Workers -- often ex-offenders or former gang members themselves -- work with young people who've grown inured to violence, to teach them what normal standards of behavior are. CeaseFire partners with local clergy, who reach out to young people with messages of hope and peace. And CeaseFire encourages adults throughout the community to serve as role models, to show people, young people, positive alternatives to a life of violence, and to guide young people on a path to success.

Over the last two years, I've traveled around the country, visiting with young people and with the adults who are so important to their lives. I've been to schools and after-school programs. I've met with mentors and Big Brothers and Big Sisters. I visited a sports program in Detroit, a debate program in Atlanta, a gang-intervention program in Los Angeles. And in June 2005, I visited CeaseFire Chicago.

All of these visits led to a White House summit on Helping America's Youth, in October of 2005, where Gary was one of our presenters. At the conference, more than 500 researchers, civic leaders, educators, and parents met to identify the challenges facing America's youth, and then to determine what programs are best to help young people overcome these challenges.

At the conference, we introduced an online, interactive Community Guide. The guide helps concerned adults learn more about their own communities, like which neighborhoods have the most youth-related problems, and what local resources are already available to help address these problems. The Community Guide is available on the Helping America's Youth website, and that's at www.helpingamericasyouth.gov -- that's g-o-v.

I encourage each one of you to go to this web site, and use the Community Guide in your own communities, and watch the webcast of the next Helping America's Youth Regional Conference, which will take place, as I said, in Nashville on April 12th.

At these conferences, and at every one of my visits, I've heard from young people how important it is to have the support and encouragement of caring adults. The benefit of adult involvement isn't just anecdotal: Statistics show that through CeaseFire Chicago, caring adults have reduced shootings in some neighborhoods by as much as 82 percent. CeaseFire's model is so successful that cities around the country are working to adapt it to their own communities. CeaseFire programs are already underway in Newark, Cincinnati, and Baltimore. And the last time I was in New Orleans, I actually saw a community group demanding a CeaseFire group for New Orleans.

This high demand shows that adults across the United States are eager to improve the lives of our young people. And adults in the business community have an especially important role to play.

We know what the corporate sector can accomplish when it dedicates its resources and its ingenuity to resolving our greatest challenges. More than half a century ago, government, business and private philanthropy came together to help end the polio epidemic. Today, business leaders are helping turn the tide against malaria and HIV/AIDS. For four decades, America's cities have been plagued by what Dr. Slutkin calls the "violence epidemic." Here, too, businesses have an extraordinary opportunity to help.

In Chicago, the business community is already hard at work. For eight years, Draft Worldwide Marketing has designed the "Stop Killing" signs and the "Don't Shoot" bumper stickers that inspire communities to speak out against violence. ClearChannel provides CeaseFire free billboard space to deliver these messages. Local eateries have offered food for CeaseFire neighborhood events. The Chicago White Sox have donated tickets to baseball games, and Winston-Strawn law firm has contributed tickets to Chicago Bulls games. These outings give young people a chance to be included in the life of their city.

One of the best places for young people to learn from good role models is on the job, and local businesses have provided hundreds of CeaseFire clients with meaningful employment. One CeaseFire Outreach Worker, Xavier, said that when he asks a client what they need to give up life on the street, the first thing they'll say is a job.

When businesses invest in America's youth, the benefits don't end with America's youth. Safer communities offer more opportunities for investment, and better places to do business. Employees who live in a safe community are more productive. Businesses can attract talented people if they can offer prospective employees safe neighborhoods to call home.

And investing in youth gives companies better prepared candidates for employment. Students who have witnessed violence score lower on IQ and reading tests, and are more likely to develop stress disorders. By working with communities to reduce youth violence, companies can make sure young people are better educated, and better prepared for the workplace.

The corporate community also shares the moral responsibility that all of us have to help America's young people. Part of what makes our country great is citizens' willingness to lift up their neighbors in need. By investing in our youth, each of you can help young people in your cities, and throughout our country, lift themselves up from a life of violence -- young people like Freddie Martinez.

I first met Freddie when I visited CeaseFire Chicago two years ago. Before he came to CeaseFire, Freddie had been expelled from high school. He was an active gang member who saw high-risk activities -- fights, drugs, and guns -- as a way of life. His record showed multiple arrests for possession of firearms and narcotics. Freddie lost a close friend who was murdered on his 16th birthday, and in the same year, Freddie was shot, too.

That year, Freddie met Miguel Arcos, a CeaseFire Outreach Worker, on the street in his Southwest neighborhood. Freddie had just been arrested for firearm possession, and was sentenced to probation and boot camp. Over the last two years, since the last time I saw Freddie, he's worked with Miguel to put his gang past behind him.

Now Freddie has completed his boot camp, and he's been working two jobs for seven months. He's opened his first bank account, and he's bought his first car. For the first time, Freddie is living independently in an apartment. He needs only one more course to complete his GED, and he is considering City College.

Freddie said he joined a gang because it was what he grew up with. All of his friends in his neighborhood did it, and Freddie didn't know anything else. Now, thanks to CeaseFire, Freddie looks toward different role models. Freddie's older brother has just completed his military service, and is back in school studying business. Freddie says he shares his brother's dream of opening their own car mechanic shop.

Because of Miguel's guidance, Freddie explains, "I'm building a life, instead of dying in the streets." CeaseFire, he adds, "changed my whole perspective on life." Freddie and Miguel are here in our audience. Do they want to stand? (Applause.)

Throughout our country's history, our citizens have given generously to their fellow Americans -- whether by building schools or libraries or great museums, or ending the suffering of poverty and disease. Today, we have a chance to give millions of young people, like Freddie Martinez, the skills and the self-confidence and the hope they need to lead successful lives. Thanks to each of you for your commitment to investing in our young people. Thank you so much for coming from all over the country to join us today. And thank you for Helping America's Youth.

* University of Illinois at Chicago