For Immediate Release
Office of the First Lady
March 27, 2007

MRS. BUSH: Thank you all very much, and thank you, Connie, so much for your very warm words. I appreciate it a lot. Let's see if I can find my speech in here. (Laughter.) Thank you, everybody. Please be seated.

Thank you, Connie, for your very kind introduction, and thank you for your work and your great service for our troops. Thank you very much for that. 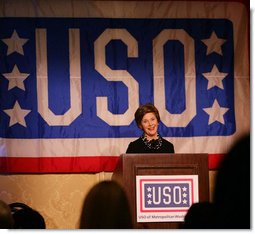 I want to recognize Secretary Jim Nicholson, the Secretary of the Department of Veterans Affairs; General Peter Pace, Chairman of the U.S. Joint Chiefs of Staff; Elaine Rogers, President of the USO of Metropolitan Washington. Elaine, you do such a terrific job. John Marselle, the Chairman of the USO of Metropolitan Washington, USO board members and staff, military leaders, service members and spouses, government officials, honorees and distinguished guests. I'm so happy to be with you here tonight, and I'm honored to receive this year's USO Service Award.

For 66 years, the USO has lifted the spirits of our troops. USO clubs have hosted dances, movies, and parties, and supplied coffee and doughnuts. Bob Hope's USO tours brought our enlisted men witty one-liners for half a century. Rita Hayworth's performances brought Hollywood glamour to our troops during World War II. Marilyn Monroe serenaded GIs in Korea, and Ann Margaret distributed pin-up photos in Vietnam. Clearly, the USO brings our troops the hottest stars in entertainment. (Laughter.)

Today, the USO caters to an all-volunteer military. USO audiences include more women. Our troops are more likely to be married -- although USO tours with the Dallas Cowboys Cheerleaders remain as popular as ever. (Laughter.)

Americans have the responsibility to support our troops, and certainly no one does that better than the USO. Here in Washington, USO-Metro reaches more than half a million service members and their families. USO volunteers boost morale at troop-appreciation events. They provide career support for spouses at job fairs. USO-Metro distributes thousands of phone cards, so that the reassuring voices of loved ones can reach our troops deployed overseas.

Just last year, USO-Metro volunteers gave 60,000 hours of service. In every capacity, they've gone above and beyond for our troops. One night, an exhausted Marine arrived at USO-Metro's Lounge at BWI. On emergency leave from Iraq, this Marine came straight home from the field after learning that his mother had died. Her funeral was being held in New Jersey the next day. But after 42 hours of travel, the Marine arrived at BWI with no tickets or money, and too late at night to make travel plans.

The USO volunteer staffing the lounge was determined to get that Marine home. This volunteer called the Maryland police, and arranged for a state trooper to drive the Marine to the Delaware border. There, a Delaware state trooper picked up the Marine, and brought him to the New Jersey border. He was met there by a New Jersey state trooper, who drove that Marine home. Thanks to these police officers -- and to a resourceful USO volunteer -- the Marine arrived in time to comfort his family, and pay his respects to his mother.

One of USO-Metro's most important jobs is cheering our wounded troops at Walter Reed and Bethesda. USO volunteers bring recovering soldiers to local sporting events and concerts. They arrange visits by celebrity entertainers, who fill the hospital wards with laughter and music. USO also makes sure no soldier has to face the recovery process without their moms and dads, sons and daughters, wives or husbands by their side. Through its hotel-voucher and apartment program, USO provides free housing for the families of our wounded troops.

USO-Metro also gives families crucial emotional support. In 2004, Ashley Grady's high school sweetheart, Joe, enlisted in the Marine Corps. He was stationed at Twenty-nine Palms, and three-hour drives across the California desert couldn't stifle Joe and Ashley's romance. It wasn't long before these two were engaged.

On the Fourth of July, 2005, Joe deployed to Fallujah, and Ashley turned to the business of planning their wedding. She spent all of December 1st on the phone with Joe's dad, booking the church and the reception site and the photographer. At 9:30 that night, Ashley got another call. This time, Joe's dad had bad news: Joe had been wounded in an IED attack.

At first, no one knew whether Joe would survive. He lost his right arm, and he suffered severe internal injuries. Joe was eventually transferred to Bethesda, where his family stayed with him during the day, and Ashley kept vigil at night. But to remain by Joe's side throughout his rehab process, this military fianc e needed to be a military wife.

Joe couldn't leave the hospital, or eat wedding cake. So the newlyweds celebrated by exchanging spoonfuls of ice cream. But shortly after their wedding, Joe and Ashley were contacted by the USO. With help from FunJet Vacations, USO-Metro sent the couple on a real honeymoon to the Mexican Riviera. After living in hotels and hospital rooms for 11 months, Ashley said the best part of their trip was just getting to be with her new husband by herself.

Throughout Joe's recovery, Ashley recalls the kindness and the support of USO volunteers and staff was overwhelming. Today, Joe and Ashley are building their life together in Wisconsin. Ashley is studying to become an elementary school teacher, and Joe is preparing to teach high school English.

Our armed forces are filled with courageous young people like Joe Grady. They're supported by loving parents, children, and spouses like Ashley. By supporting organizations like the USO, the American people can show their gratitude to these troops and families, who sacrifice so much to keep us safe.

Thanks to each and every one of you for your outstanding work for our men and women in uniform. Thanks for showing the compassion of the American people. And thank you very much for this award.