For Immediate Release
Office of the Press Secretary
March 27, 2007

THE PRESIDENT: This morning I got a phone call from Tony Snow. He called me from the hospital. He told me that when they went in and operated on him they found cancer. It's a recurrence of the cancer that he thought that he had successfully dealt with in the past. His attitude is, one, that he is not going to let this whip him, and he's upbeat. My attitude is, is that we need to pray for him, and for his family. 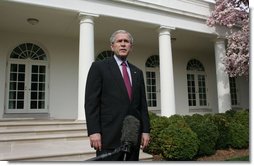 Obviously, a lot of folks here in the White House worry a lot about their friend, as do Laura and I. And so my message to Tony is, stay strong; a lot of people love you and care for you and will pray for you. And we're hoping for all the best. I'm looking forward to the day that he comes back to the White House and briefs the press corps on the decisions that I'm making and why I'm making them. In the meantime, I hope our fellow citizens offer a prayer to he and his family.