For Immediate Release
Office of the Press Secretary
March 23, 2007

Here in Washington, members of both parties recognize that our most solemn responsibility is to support our troops in the war on terror. Yet, today, a narrow majority in the House of Representatives abdicated its responsibility by passing a war spending bill that has no chance of becoming law, and brings us no closer to getting our troops the resources they need to do their job. 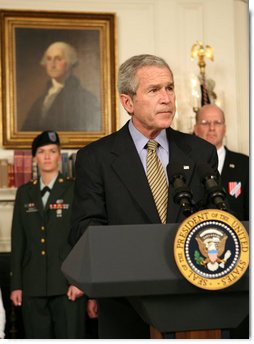 The purpose of the emergency war spending bill I requested was to provide our troops with vital funding. Instead, Democrats in the House, in an act of political theater, voted to substitute their judgment for that of our military commanders on the ground in Iraq. They set rigid restrictions that will require an army of lawyers to interpret. They set an arbitrary date for withdrawal without regard for conditions on the ground. And they tacked on billions for pet projects that have nothing to do with winning the war on terror. This bill has too much pork, too many conditions and an artificial timetable for withdrawal.

As I have made clear for weeks, I will veto it if it comes to my desk. And because the vote in the House was so close, it is clear that my veto would be sustained. Today's action in the House does only one thing: it delays the delivering of vital resources for our troops. A narrow majority has decided to take this course, just as General Petraeus and his troops are carrying out a new strategy to help the Iraqis secure their capital city.

Amid the real challenges in Iraq, we're beginning to see some signs of progress. Yet, to score political points, the Democratic majority in the House has shown it is willing to undermine the gains our troops are making on the ground.

Democrats want to make clear that they oppose the war in Iraq. They have made their point. For some, that is not enough. These Democrats believe that the longer they can delay funding for our troops, the more likely they are to force me to accept restrictions on our commanders, an artificial timetable for withdrawal, and their pet spending projects. This is not going to happen. Our men and women in uniform need these emergency war funds. The Secretary of Defense has warned that if Congress does not approve the emergency funding for our troops by April the 15th, our men and women in uniform will face significant disruptions, and so would their families.

The Democrats have sent their message, now it's time to send their money. This is an important moment -- a decision for the new leaders in Congress. Our men in women in uniform should not have to worry that politicians in Washington will deny them the funds and the flexibility they need to win. Congress needs to send me a clean bill that I can sign without delay. I expect Congress to do its duty and to fund our troops, and so do the American people -- and so do the good men and women standing with me here today. 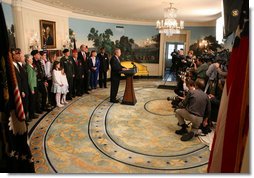