For Immediate Release
Office of the Press Secretary
March 21, 2007

PRESIDENT BUSH: Madam Prime Minister, welcome. We've had a really fruitful discussion. The Prime Minister and I have visited several times over the course of the years. Every time I've talked to Helen Clark I've found a very straightforward, honest woman who cares deeply about the country she represents. And I really thank you very much for coming back. 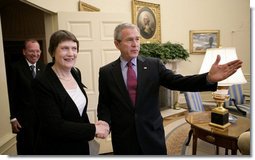 We talked about a lot of subjects. We talked about the importance for the United States and New Zealand to work cooperatively in helping democracy in places like Afghanistan. We talked about North Korea and Iran, our mutual desire for these problems of nations wanting to have nuclear weapons to be solved in a peaceful way, by using the diplomatic process.

We talked about commerce. We talked about the environment and the need for our respective countries to work toward energy security. I assured the Prime Minister that my initiative to reduce gasoline in the United States by 20 percent over the next 10 years was a realistic initiative that's going to require new technologies, which we hope that other parts of the world, including New Zealand, will find useful to help achieve the common objective.

We talked about the South Pacific. And I praised the Prime Minister on her leadership in dealing with some difficult issues. I assured her that our government would want to help in any way we can. We understand this is a -- some of the countries there have got difficult issues, and it requires New Zealand's leadership with U.S. help to help solve the problems -- and Australian help, as well.

We talked about the need for us to continue to work together in the Asia Pacific region, about how APEC is a useful forum for New Zealand and the United States to work with China and other nations.

All in all, I found it to be a constructive conversation, such a good conversation I've decided to invite her for lunch.

PRIME MINISTER CLARK: Well, thank you, Mr. President. It has been a good conversation. It's a very good relationship. And we talked about the areas in the new international security environment where we're working particularly closely -- counter-terrorism, counter-proliferation. The President is very familiar with the work New Zealand has been doing in Afghanistan and very appreciative of it, as I know the Afghanistan government and people are.

We've talked about New Zealand's support in the counter-proliferation area. I told the President today that following on the good work that his country and others have done in the six-party talks in North Korea, New Zealand is prepared to offer support for the energy package as part of the initial actions agreement that came out of the last session of the six-party talks. We've been involved with the Korean issue before, support of the KEDO fund. So we're prepared to be in, and support de-nuclearization of the Korean Peninsula.

We're also participating with the U.S. on another project under the G8 global partnership for eliminating the weapons of mass destruction still floating around the ex-Soviet countries. And we'll be involved in another partnership with the U.S. on the Ukranian border, which involves training officials and detecting material which might be crossing borders. 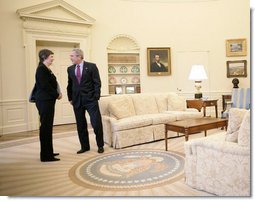 I talked about the importance to us of the U.S. presence in the Asia Pacific. We cooperate a lot on the Asia Pacific, a lot of common objectives, work well in APEC together. I particularly welcomed the President's support for developing a concept of a free trade area of the Asia Pacific, which we have to look at again at the Sydney APEC summit.

Also appreciative of the fact that the U.S. is focusing on the problems of the South Pacific. We've had close coordination on the aftermath of the coup in Fiji, on the issues in the Solomon Islands, on Tonga, where the State Department is shortly to send another envoy to look at the situation there. Quite a considerable Tonga population in the U.S., as well as in New Zealand.

And of course, Timor, which has many of the characteristics of a South Pacific country, we're very active in, as well; just sent a new helicopter contingent up there to support the peace effort.

So all in all, we've run through those issues. I've indicated that New Zealand is very supportive of fast-track authority being extended because the Doha Round needs that extension. And if at some point in the future the U.S. is in a position to consider negotiating with more countries on FTA, New Zealand is there. And we think we present very, very few problems for the U.S.

So had the opportunity to run over a lot of issues, and a very, very good relationship, and thank the President for the invitation to be here today.

PRESIDENT BUSH: Thank you, Madam Prime Minister. Thank you all. 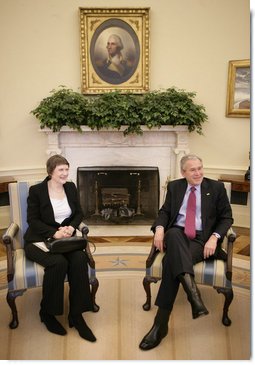