For Immediate Release
Office of the Press Secretary
March 20, 2007

THE PRESIDENT: Earlier today, my staff met with congressional leaders about the resignations of U.S. attorneys. As you know, I have broad discretion to replace political appointees throughout the government, including U.S. attorneys. And in this case, I appointed these U.S. attorneys and they served four-year terms. 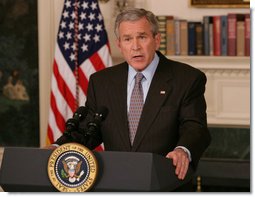 The Justice Department, with the approval of the White House, believed new leadership in these positions would better serve our country. The announcement of this decision and the subsequent explanation of these changes has been confusing and, in some cases, incomplete. Neither the Attorney General, nor I approve of how these explanations were handled. We're determined to correct the problem.

Today I'm also announcing the following steps my administration is taking to correct the record and demonstrate our willingness to work with the Congress. First, the Attorney General and his key staff will testify before the relevant congressional committees to explain how the decision was made and for what reasons. Second, we're giving Congress access to an unprecedented variety of information about the process used to make the decision about replacing eight of the 93 U.S. attorneys.

Third, I recognize there is significant interest in the role the White House played in the resignations of these U.S. attorneys. Access to White House staff is always a sensitive issue. The President relies upon his staff to provide him candid advice. The framers of the Constitution understood this vital role when developing the separate branches of government. And if the staff of a President operated in constant fear of being hauled before various committees to discuss internal deliberations, the President would not receive candid advice, and the American people would be ill-served.

Yet, in this case, I recognize the importance of members of Congress having -- the importance of Congress has placed on understanding how and why this decision was made. So I'll allow relevant committee members on a bipartisan basis to interview key members of my staff to ascertain relevant facts. In addition to this offer, we will also release all White House documents and emails involving direct communications with the Justice Department or any other outside person, including members of Congress and their staff, related to this issue. These extraordinary steps offered today to the majority in Congress demonstrate a reasonable solution to the issue. However, we will not go along with a partisan fishing expedition aimed at honorable public servants.

The initial response by Democrats, unfortunately, shows some appear more interested in scoring political points than in learning the facts. It will be regrettable if they choose to head down the partisan road of issuing subpoenas and demanding show trials when I have agreed to make key White House officials and documents available. I have proposed a reasonable way to avoid an impasse. I hope they don't choose confrontation. I will oppose any attempts to subpoena White House officials.

As we cut through all the partisan rhetoric, it's important to maintain perspective on a couple of important points. First, it was natural and appropriate for members of the White House staff to consider and to discuss with the Justice Department whether to replace all 93 U.S. attorneys at the beginning of my second term. The start of a second term is a natural time to discuss the status of political appointees within the White House and with relevant agencies, including the Justice Department. In this case, the idea was rejected and was not pursued.

Second, it is common for me, members of my staff, and the Justice Department to receive complaints from members of Congress in both parties, and from other citizens. And we did hear complaints and concerns about U.S. attorneys. Some complained about the lack of vigorous prosecution of election fraud cases, while others had concerns about immigration cases not being prosecuted. These concerns are often shared between the White House and the Justice Department, and that is completely appropriate.

I also want to say something to the U.S. attorneys who resigned. I appreciate your service to the country. And while I strongly support the Attorney General's decision and am confident he acted appropriately, I regret these resignations turned into such a public spectacle.

It's now my hope that the United States Congress will act appropriately. My administration has made a very reasonable proposal. It's not too late for Democrats to drop the partisanship and work together. Democrats now have to choose whether they will waste time and provoke an unnecessary confrontation, or whether they will join us in working to do the people's business. There are too many important issues, from funding our troops to comprehensive immigration reform, to balancing the budget, for us to accomplish on behalf of the American people.

Thank you for your time. Now I'll answer a couple of questions.

Q Mr. President, are you still completely convinced that the administration did not exert any political pressure in the firing of these attorneys?

THE PRESIDENT: Deb, there is no indication that anybody did anything improper. And I'm sure Congress has that question. That's why I've put forth a reasonable proposal for people to be comfortable with the decisions and how they were made. Al Gonzales and his team will be testifying. We have made available people on my staff to be interviewed. And we've made an unprecedented number of documents available.

Q Sir, are you convinced, personally?

THE PRESIDENT: There's no indication whatsoever, after reviews by the White House staff, that anybody did anything improper.

Q If today's offer from Mr. Fielding is your best and final offer on this, are you going to go to the mat in protecting the principle that you talked about? And why not, since you say nothing wrong was done by your staff, why not just clear the air and let Karl Rove and other senior aides testify in public, under oath? There's been a precedent for previous administrations doing that.

THE PRESIDENT: Some have, some haven't. My choice is to make sure that I safeguard the ability for Presidents to get good decisions.

Michael, I'm worried about precedents that would make it difficult for somebody to walk into the Oval Office and say, Mr. President, here's what's on my mind. And if you haul somebody up in front of Congress and put them in oath and all the klieg lights and all the questioning, to me, it makes it very difficult for a President to get good advice. On the other hand, I understand there is a need for information sharing on this. And I put forth what I thought was a rational proposal, and the proposal I put forward is the proposal.

Q And then you'll go to the mat, you'll take this to court --

THE PRESIDENT: Absolutely. I hope the Democrats choose not to do that. If they truly are interested in information -- in other words, if they want to find out what went on between the White House and the Justice Department, they need to read all the emails we released. If they're truly interested in finding out what took place, I have proposed a way for them to find out what took place. My concern is, they would rather be involved with partisanship. They view this as an opportunity to score political points.

And anyway, the proposal we put forward is a good one. There really is a way for people to get information. We'll just fine out what's on their mind.

Q Sir, in at least a few instances, the attorneys that were dismissed were actively investigating Republicans -- in San Diego, in Arizona, in Nevada. By removing them, wouldn't that have possibly impeded or stopped those investigations? And, sir, if I may also ask about the Attorney General. He does not have support among many Republicans and Democrats. Can he still be effective?

THE PRESIDENT: Yes, he's got support with me. I support the Attorney General. I told you in Mexico I've got confidence in him; I still do. He's going to go up to Capitol Hill and he's going to explain the very questions you asked. I've heard all these allegations and rumors. And people just need to hear the truth, and they're going to go up and explain the truth.

Q In San Diego, Nevada, Arizona, Republicans were the targets of investigations, and those U.S. attorneys were removed. Does that not give the appearance --

THE PRESIDENT: Well, I don't -- it may give the appearance of something, but I think what you need to do is listen to the facts, and let them explain to -- it's precisely why they're going up to testify, so that the American people can hear the truth about why the decision was made.

Listen, first of all, these U.S. attorneys serve at the pleasure of the President. I named them all. And the Justice Department made recommendations, which the White House accepted, that eight of the 93 would no longer serve. And they will go up and make the explanations as to why -- I'm sorry this, frankly, has bubbled to the surface the way it has, for the U.S. attorneys involved. I really am. These are -- I put them in there in the first place; they're decent people. They serve at our pleasure. And yet, now they're being held up into the scrutiny of all this, and it's just -- what I said in my comments, I meant about them. I appreciated their service, and I'm sorry that the situation has gotten to where it's got. But that's Washington, D.C. for you. You know, there's a lot of politics in this town.

And I repeat, we would like people to hear the truth. And, Kelly, your question is one I'm confident will be asked of people up there. And the Justice Department will answer that question in open forum for everybody to see.

If the Democrats truly do want to move forward and find the right information, they ought to accept what I proposed. And the idea of dragging White House members up there to score political points, or to put the klieg lights out there -- which will harm the President's ability to get good information, Michael -- is -- I really do believe will show the true nature of this debate.

And if information is the desire, here's a great way forward. If scoring political points is the desire, then the rejection of this reasonable proposal will really be evident for the American people to see.

Listen, thank you all for your interest.