For Immediate Release
Office of the Press Secretary
March 19, 2007


Today, President Bush and Prime Minister Maliki consulted via videoconference on implementation of the Baghdad Security Plan, particularly joint efforts to bring security to the Iraqi population. The Prime Minister underscored his government's effort to implement the security plan in an even-handed manner and the importance of strengthening the Iraqi security forces. He underlined his commitment to advance national reconciliation and promote key legislation on debathification and hydrocarbons to ensure that all Iraqis committed to peace can benefit from a stable, prosperous, democratic Iraq. 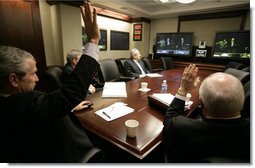 President Bush welcomed these commitments and reaffirmed his support for the Prime Minister and the Government of Iraq as it acts to pursue these objectives. The two leaders agreed to remain in close contact.