For Immediate Release
Office of the Press Secretary
March 16, 2007

PRIME MINISTER AHERN: Mr. President, distinguished guests, it's a great pleasure and honor to return here to the White House this morning to wish you a Happy St. Patrick's Day. This ceremony symbolizes, in a very special way, the bonds between our two peoples. We're two countries of vastly different scales, but we're two peoples linked in a profound and a unique way. It's entirely fitting that through this ceremony, we give expression and salute to many Irish who have helped build this great country and celebrate the journey that Ireland has made from dark times past to the confident, modern and successful country it is today. 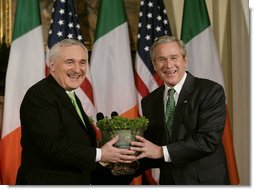 Mr. President, I'm glad to be able to say on this St. Patrick's Day, 2007, that peace in Ireland is a reality and that our people enjoy success unimaginable to earlier generations. In achieving this, we've been able to count on America as a true partner and a generous friend. This country and our many friends here have stood with us at all times, helped build our peace and contributed enormously to our economic success. This, then, is a moment to celebrate and, most of all, to say thank you.

I would like to recognize the work of Ambassadors Mitchell Reiss and James Kenny in recent years, and now Ambassador Tom Foley and Under Secretary Paula Dobriansky, whose commitment to responsibilities we greatly appreciate.

In last week's election in Northern Ireland, the people gave a strong and a very clear message. After so many years of delay and disappointment, they now accept that the key outstanding issues which have frustrated progress have been addressed, and that the time has come to Northern Ireland to move on.

Prime Minister Blair and I will spare no effort, Mr. President, to support the parties in every way that we can as they take the essential and historic last steps that lie ahead. Time is pressing, and it is our deepest wish -- and I know that you share with us, Mr. President -- that nothing should allow the process to falter at this final moment. Your support is deeply and always appreciated, and will continue to be a vital source of encouragement to us all.

Mr. President, this year, two significant anniversaries of events in 1607 are being celebrated: the settling of Jamestown, Virginia, in the United States, and the Flight of the Earls from Ireland to Europe, which effectively inaugurated the Irish diaspora. That settlement in Virginia was followed a century later by the emigration from Ireland, which brought a proud Scots-Irish tradition to these shores, a heritage which is widely celebrated and embraced today.

Mr. President, each new generation of Irish arriving in this country has made is own contribution and helped assure a unique relationship. The generation of Irish who have arrived here more recently are themselves now putting down new and deep roots and our a precious asset as we build a relationship and keep it fresh and vibrant for the future.

I want to thank you for your support for a comprehensive and balanced solution to the current challenges facing the immigration system in the United States. You've offered real leadership on this sensitive issue. The resolution of this issue would mean an enormous amount to so many Irish men and women, and I fervently hope that they will, in the not too distant future, be able to step away from the shadows and into the sunshine of this great country.

Mr. President, I believe that we are closer than at any time in our past in Ireland to a final resolution of one of the oldest conflicts in history. I hope that our journey can give inspiration and hope to other parts of the world that are in conflict, or where people are suffering and in despair. The plight of the poorest in the world, the search for peace throughout the Middle East, global warming, air transport and trade liberalization are but a few of the vital and complex challenges demanding the attention of the international community. I look forward to discussing many of these wider issues with you this morning, and also to reviewing our bilateral relations.

Mr. President, thank you once again for your support, for your friendship. I'm pleased to present this shamrock as a symbol of the very special kinship between Ireland and the United States. And to you, Mr. President, Happy St. Patrick's Day.

(The shamrock is presented.) (Applause.)

THE PRESIDENT: Thank you. Taoiseach, good morning --or should I say, "top o' the morning." I'm really pleased that you came back to the White House. I'm looking forward to our discussions. And I cannot thank you enough for your strong leadership in resolving the issues of Northern Ireland, and I stand ready to help.

I gratefully accept the bowl of shamrocks. I am delighted that you have joined us, once again, to celebrate St. Patrick's Day. St. Patrick's Day is an occasion that unites two distinct groups of Americans: those who are of Irish descent, and those who wish they were. (Laughter.) Whether they're Irish today or every day, Americans are grateful for our country's Irish heritage, and the enduring friendship that exists between Ireland and the United States is strong.

The ties that bind our two nations stretch all the way back to our country's founding. Ireland gave us at least nine signers of the Declaration of Independence, and many more who risked their lives to defend it. Irish Americans fought valiantly to preserve the union in our Civil War. They helped turn back the totalitarian ideologies of the 20th century. And they're fighting bravely in today's war on terror, risking their lives to secure a future of freedom and peace for generations to come.

Many of Ireland's sons and daughters came to our shores to escape poverty and famine. Once here, they helped us build and strengthen this great nation with their gifts of industry and talent and faith. Irish workers build our railroads, our cathedrals, and our cities. Irish writers and musicians have enriched our literature and our culture. Irish priests and nuns established parochial schools that have helped generations of children build lives of prosperity and purpose. And with their many contributions, Irish Americans remind us of our heritage as a nation of immigrants, and our duty to remain a welcoming society.

In 1783, President George Washington -- I refer to him as the first George W. -- (laughter) -- wrote to recent Irish immigrants in New York that "America is open to receive the oppressed and persecuted of all nations," and he expressed his wish that the blessings of equal liberty and unrestrained commerce would one day prevail in Ireland.

Well, today, Ireland is a free, independent, and very prosperous nation. Ireland now has one of the fastest growing economies in Europe. And over the past decade, our two nations have enjoyed a strong and growing trade relationship. And as Ireland prospers, a land whose people came to America seeking a better life is now attracting to its own shores immigrants with those very same dreams.

It has been said that the Irish, like the presence of God, are to be found everywhere. On this St. Patrick's Day, we're grateful for the presence of the Irish in our country. And we are blessed by your presence here at the White House, Taoiseach. I thank you for coming to help us celebrate St. Patrick's Day, and honor the friendship between our two nations. In the words of the Irish proverb: "May the Lord keep you in His hand and never close His fist too tight." (Laughter.)