For Immediate Release
Office of the Press Secretary
March 13, 2007

PRESIDENT CALDERON: (As translated.) Your Excellency, Mr. George W. Bush, President of the United States of America; Mrs. Laura Bush and distinguished members of the staff accompanying President Bush, I hope you are all welcome to Mexico. We're very pleased with your visit because it reflects your interest upon our country and it allows us to dialogue about our complex bilateral agenda. 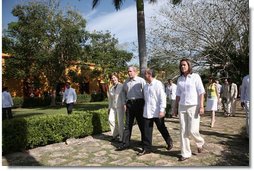 I come originally from the state of Michoacán, one of the states that has endured tremendously with migration. And I know the pain of the families when they split and also of all those towns where the elderly are remaining alone. I also know that Mexicans lose in each migrant the best of our people, young people, working people, and audacious people, strong people -- people that leave Mexico because they don't find the opportunities here in order to pull through with their lives. This is which we want to generate jobs for Mexicans here in Mexico, because that is the only way in order to truly solve the migratory issue.

That is a solution that is convenient for all of us, and as a result, we should commonly resolve it, because while we have two economies that complement each other, but yet are not equal. One is intensive in labor, and the other one is intensive in capital. So, therefore, migration might not be stopped, and certainly not by decree. This is why we are intensively working, so instead that our labor will be moving to where the capital is located. It will rather receive in Mexico the investment where the labor is located and our families will not continue splitting themselves, nor our population. Mexicans will all due fully respect the right that of the government and the people of the United States of America has to decide within its territory what will be best for their concerns and security. 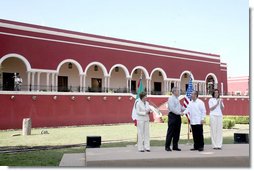 But at the same time, we do consider in a respectful way that we may truly stop the migration by building a kilometer of highway in Michoacán or Zacatecas than 10 kilometers of walls in the border. This is why we wish to respect the rights of everyone, more so of our population. This is why we recognize and support the effort that you are conducting, Mr. President Bush, in order to promote a comprehensive migratory reform in the Congress of the United States, and we wish you the best of successes. This is why we also would like to continue working together, and now with tremendous emphasis in order to accelerate the development of our people, because I am certain that there is nothing better for the security and prosperity of our region than the prosperity of Mexico.

On the other hand, we share the intention of keeping a safe border, because those who live on both sides of the border deserve so, being American or Mexican. The government does the part that it has to do. It gets back all the public plazas and the streets from criminals and drugs. We have accredited with facts our firm commitment in our battle against those who wish to poison the bodies and the souls of our young population. But in order to be successful in our struggle, we need the collaboration and the active participation of our neighbor, knowing that while we will not reduce the demand for drugs in a certain area, it will be very difficult to reduce the supply in ours.

Mr. President, I have no doubt that together our governments will move forward in the generation of new opportunities of well-being and prosperity for our nations. Please feel very, very welcome to Mexico.

Mr. President and Mrs. Zavala, thank you for your warm welcome. We're delighted to be back in your country. As governor of Texas I visited your beautiful country many times and I came to know and admire the people of Mexico. As President, I've worked to strengthen the ties between our two nations. Mexico was the first country I visited after I became President of the United States. The United States and Mexico are partners. We're partners in building a safer, more democratic and more prosperous hemisphere. And a strong relationship between our countries is based upon mutual trust and mutual respect.

President Calderon, I appreciate your determination to create new opportunities for the people of Mexico. I share your commitment to building an Americas where the poor and the marginalized begin to feel the blessings of liberty in their daily lives. I respect your views on migration. Because we're working together, I believe we will make good progress on this important issue. Together, we're working to ensure that we have a secure and modern border that speeds the legitimate flow of people and commerce, and stop those who threaten our common safety and prosperity. 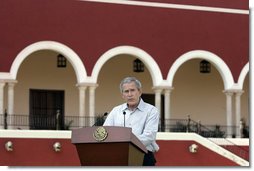 The United States respects rule of law. But in the debate on migration, I remind my fellow citizens that family values do not stop at the Rio Grande River, that there are decent, hardworking honorable citizens of Mexico who want to make a living for their families. And so, Mr. President, my pledge to you and your government -- but, more importantly, the people of Mexico -- is I will work as hard as I possibly can to pass comprehensive immigration reform.

We support your plans to improve education and health care and housing for all your citizens. We will continue to work with you to expand opportunities for trade and investment. We will work together to facilitate a smooth transition to full trade, especially on sensitive issues like corn and beans. We recognize that the best hope to lift millions out of poverty is to spread prosperity through free and fair trade. The people of the United States understand that when we help our neighbors build a better life for themselves, we advance peace and prosperity for all of us.

Today, the most important ties between the United States and Mexico are not government to government, they are people to people. These ties include churches and faith-based institutions that serve people on both sides of the frontera. These ties include our colleges and universities, which run important exchange programs for students and teachers. These ties include our businesses with trade with one another and invest in each other's countries. And these ties include the families, who send an estimated $20 billion in remittances each year to their relatives here in Mexico, one of the largest private economic initiatives in the world. These ties are vital and they are growing.

Mr. President, geography has made our countries neighbors, but the choice we've made for each other is a choice for freedom. And that choice has made us friends. I'm honored to be in your country. I'm looking forward to our discussions over the next two days. You've set a very ambitious agenda that is going to require a lot of hard work. But I'm confident that by working together, we'll build a better life and a future of hope for our peoples. 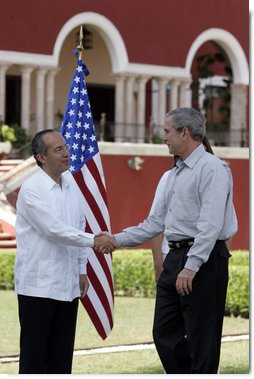 Thank you for having me. God bless. (Applause.)