For Immediate Release
Office of the Press Secretary
March 12, 2007

PRESIDENT BERGER: (As translated.) Dear friends, welcome all. On behalf of my government, and on behalf of the people of Guatemala, I am pleased to welcome President George W. Bush, his wife, and his distinguished delegation in our country.

We celebrate that President Bush decided to include Guatemala in his tour throughout Latin America. We welcome you with affection in this multiethnic and plural-lingual country, where many cultures live together, where the strong features of modernity, and where, after a lengthy and painful conflict that divided us during 14 years, we are, with determination, following the path of reconciliation, in search for building a plural, democratic, tolerant and participatory society. 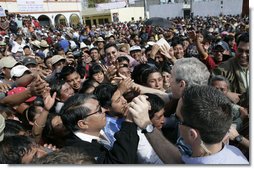 Our historic relationship with the United States of America, at times troubled, date far back. We are pleased to confirm that in recent decades this relationship matured, and is today characterized by further interactions that are respectful and broad in scope.

We share values, including, of course, representative democracy and social justice. We also share interests that through last year with the entry into force of the free trade agreement between the Central American countries and the Dominican Republic on the one hand, and the United States of America on the other hand.

And we would be remiss if we do not recall that at present it is estimated that approximately 10 percent of our population lives in the United States of America. Upon the integration of the labor markets of both nations *

We shall take advantage of our conversations today, that will take place within a framework of cordiality and openness, to address topics of mutual interest -- fighting poverty, respect for human rights, and a frontal fight against organized crime, as well as Central America's economic integration. We shall also review the strengths and weaknesses of our own evolution since the signature of our peace accord.

I finish by reiterating our recognition to President Bush for his persistence in having been able to put forth the free trade agreement, and also for his initiative to promote an integrated migratory reform, that we trust will culminate with your approval, Mr. President. These two initiatives will certainly contribute to bring our two nations even closer together. 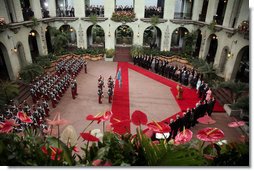 PRESIDENT BUSH: Senor Presidente, gracias por su bienvenidos a este pais, pais bella. I thank you and the First Lady for treating Laura and me with such grand hospitality. This is my first official visit to Guatemala, and we thank the people of this country for their magnificent hospitality.

I'm honored to stand in the historic courtyard where the 1996 peace accords were signed. The accords mark the end of 36 years of internal conflict, and the beginning of a more hopeful future for Guatemala.

Guatemala is a proud country with a rich culture. This morning, Laura and I toured the highlands where the ancient Mayans built a great civilization many centuries ago. This beautiful land is now the home of Central America's largest democracy. You've built a diverse and vibrant nation, and the people of the United States admire your determination and your resilience.

Our two countries share many values. We both believe good governments must be accountable to the people they serve and subject to the rule of law. We both believe free enterprise and hard work help lead to prosperity, and we both believe our nations have a responsibility to spread opportunity and advance the cause of social justice.

The United States and Guatemala are partners in this important work. We're working together to improve access to education and health care to give Guatemalans a safe and legal path to jobs in the United States, and to lift millions of people out of poverty by expanding trade. The ties between our two countries have never been stronger or more important.

Mr. President, Laura and I appreciate the invitation to visit your country. We appreciate the time we spent with you and your very accomplished wife. You're a man of vision and courage. You understand that real leadership requires making tough choices that serve your nation well in the long-term.

I appreciate your unwavering commitment to your people, Mr. President, and I look forward to working with you to build a better future for both our countries. 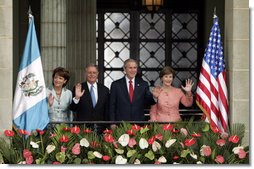 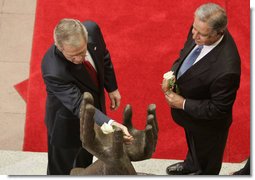 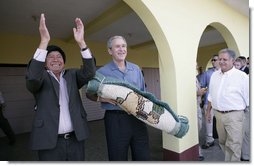