For Immediate Release
Office of the First Lady
March 9, 2007

Mrs. Bush's Remarks in a Roundtable Discussion During a Visit to the Alfasol Literacy Program
AlfaSol
São Paulo, Brazil

MRS. BUSH: Well, last September I hosted a conference on global literacy in New York with UNESCO because of the United Nations goal of having a literacy decade. And Regina was one of our presenters; AlfaSol was one of the programs that was presented because of this very idea that it's transferable, that any country could model a program after it. And you've already now transferred it to Mozambique and East Timor and Guatemala and other countries. And the whole conference on global literacy in New York, all of the presenters were programs that we thought everyone could learn from, that the world could learn from, that were programs that would work anywhere. And Regina did a great job of presenting AlfaSol. 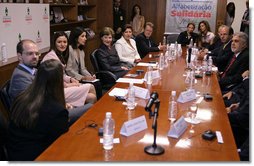 And the other thing that I think is really important, besides literacy, of course, which is the main goal, and most important part, but is the community involvement, with the community being responsible for finding a place for people to meet. And then what I think happens is then there's a group of community members who support each other, who are all learning to read, and who, at the same time, can talk about how they make money or how they support their family. And so there are a lot of networking benefits for those community members that -- we think of networking as big corporations, but the fact is, everyone in their communities can network with each other and support each other and help each other. 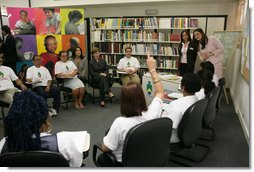