For Immediate Release
Office of the Press Secretary
March 3, 2007

THE PRESIDENT: The heart of a community like Enterprise, Alabama, is the school. And today I have walked through devastation that's hard to describe. Our thoughts, of course, go out to the students who perished. We thank God for the hundreds who lived. I want the folks of Enterprise to know that to the extent the government can, our federal government can, in working with the state, we'll help rebuild the school system, this high school. We can never replace lives, and we can't heal hearts, except through prayer. And I know -- I want the students to know, and the families to know that there's a lot of people praying for them. 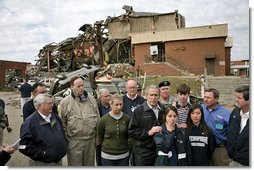 The people of America have got to know that the citizens here, even though affected by devastation, have shown great courage and compassion for their citizens in need. And it's really part of the strength of the United States to know that they're such decent folks.

God bless everybody. Thank you all.

Q How did it look from the air, sir?

THE PRESIDENT: It looks as bad from the air as it looks from the ground. And you can see right here the effects of the storm. But the biggest effect of the storm is the shattered lives. We can rebuild buildings, and the fundamental question is, will the spirit stay strong in Enterprise, Alabama. I predict that it not only will stay strong, it will be strengthened. That's my prediction. And it's easy to tell when you talk to the people, whether it's young or old, this town refuses to be devastated. This town is a town full of people that will not -- will not succumb to the effects of the storm. The Mayor is strong; the Principal of the school is strong; the Lieutenant; and the children, the high school seniors.

And so it's a -- these are very tough times for the people here. And there are going to be tough times for the people in Georgia that were affected. And I just hope they know that a lot of people are praying for them, that a lot of strangers that they'll never have met care for them, and that out of this rubble will emerge a better tomorrow, because that's the commitment that I hear here in Enterprise. And the role of the government is going to help, to the extent that we can.