For Immediate Release
Office of the Press Secretary
March 1, 2007

THE PRESIDENT: Governor, and First Lady, thanks for your welcome. It's great to be back in the Gulf Coast of Mississippi.

I've had the privilege of coming down and meeting a lot of these folks before, so I really feel like it's, in many ways, a chance to reconnect with people who I admire. I can remember the looks on your faces when I first came down here during the incredible destruction -- right after destruction of Katrina. You know, there was something about the spirit of Mississippi, though, that made it clear to me that there was no doubt that progress was going to be made. 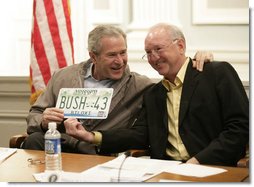 Mayor, I remember you and I walking through the streets of Biloxi and finding people that were literally stunned and were in shock, and were wondering what life meant for them. And I remember the piles of debris, Mayor, in your city -- or, Rocky, I remember talking to you when you came, and you had the same set of clothes on for the last four days -- you were trying to recover from a brutal devastation in your county.

And I've come back again because I'm inspired every time I come here to see progress and the spirit alive. People here said, we refuse to be held down by the storm, we will overcome it.

The job of the federal government has been to help. And I made a pledge early on in the process that I would work with the United States Congress, members of both political parties, to get some healthy checks written. And it's important for the check writers, the taxpayers of the United States, to know that progress is being made with their money, and that the people of Mississippi appreciate the fact that the country came to help when they needed help. It's a neighborly thing to do.

And secondly, I fully understand there's still work to be done, that even though progress has been made, this storm was so devastating that we have still got to stay focused on the task, and that we've got to work with the Governor and the local officials, the supervisors and the mayors, to continue to help address their needs.

And of the things I've heard loud and clear is that there's a continued frustration with the slowness of federal response at times. And therefore, it's important for me to hear that, and my friend, Don Powell, to hear that so that we can come and do what the people expect us to do, which is to respond to the needs of people in Mississippi.

I'm very proud of the leadership your Governor has shown. He showed leadership during the storm, he showed leadership in the aftermath of the storm, and he continues to be deeply concerned about the people of Mississippi. And he, along with two fine United States senators, are constantly talking to the White House in pretty plain language about what more needs to be done. And I hope he would say that we listen, and if possible, respond in a constructive way. 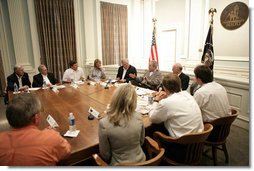 I'm proud to be back again. I intend to keep coming back so long as I'm the President -- and perhaps after the presidency, A.J. Now, A.J. has given me a great gift. Instead of the key to the city, he gave me a Biloxi, Mississippi license plate. It's got my name and my number on there. (Laughter.) One of these days, I'll own a private vehicle, and I may just put this on my vehicle when I come back and see you. (Laughter.)

Anyway, thank you all very much. Appreciate you. (Applause.) 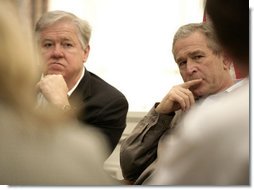