For Immediate Release
Office of the Press Secretary
March 1, 2007

THE PRESIDENT: You know, it's interesting to come back down here to the Gulf Coast. I tried to think back about what it was like the first time I came after the storm hit. And I guess the -- my most vivid recollection is the piles of rubble, literally debris stacked upon debris. It was -- it's hard to believe then that I would be -- I had faith that I'd be able to come to a home, but I had trouble visualizing. And then I kept coming down and I watched the improvement, because of the hard work of the local citizens, people like the Mayor here and the Governor, who set a vision that was a hopeful vision. 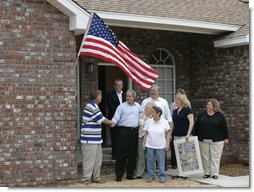 The federal government's role has been to write checks. The Governor's role and the Mayor's role is help to expedite the federal money to the local folks. And today, we are able to sit in a homeowner -- the word is "home." Again, one of the things I like to say is, when somebody walks in, welcome to my home. And it has a special ring to it here in the Gulf Coast, because there was a time when their home was totally destroyed.

Part of the reason I've come down is to tell the people here in the Gulf Coast that we still think about them in Washington, and that we listen to the Governor when he speaks. The other reason I've come down is I want the taxpayers of the United States to see firsthand what their money has done to help revitalize a series of communities that were literally wiped out because of a major storm.

It's a -- this is a hopeful day. There's obviously a lot more work to be done. You can see vacant lots where there's going to be new building. There's still work to be done here in Mississippi, and the Governor and I are going to go listen to some of the local officials describe to me what's on their mind and how we can continue to help. But times are changing for the better, and people's lives are improving, and there is hope. And I congratulate the good folks in this part of the country for their resiliency, their courage, and the fact that they never abandoned hope.