For Immediate Release
Office of the First Lady
March 1, 2007

MRS. BUSH: Well, it's so impressive, the amount of wildlife. We're looking over here, I hope you all got some film footage of it, of the short-tailed albatross, the only one, a solitary bird that's here. He's been here about five years. He's 20 years old. They know because he was banded in Japan on the island where he was. Of course, they are hoping to attract some young short-tailed albatross. That's why the decoys are here also, so there will be a mating pair here. 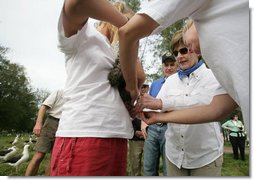 But I think what you're shocked at is the plastic that's -- even though you know, you've heard before that there's all this plastic on the ground, and then you see it, and all of the invasive plants like this yellow blooming plant right here, Verbesina, that's an invasive plant that's here.

So the goal, of course, eventually would be to restore these islands, restore the habitat that's here, be able to slowly remove the invasives, and, of course, pick up the plastic, and hopefully people everywhere in the world will do a better job of recycling plastic so it doesn't end up here, or all the other places it ends up all the way around the way.

Q I was going to say, when you see it in person, it really brings home how even though these are such remote islands, we are all sort of connected.

MRS. BUSH: That's right, we're so much more connected than we realize, and you can tell when we're here, so far away from any big mainland, either in Asia or the United States or Canada, and still to see all this plastic.

Q Any surprises so far?

MRS. BUSH: Well, it's been great. I loved having the chance to see the short-trailed albatross, an endangered bird, and the chance to see it here. And of course, we'll be watching the news, and hope that we hear that another one has landed here at some point so there can be a mating pair. 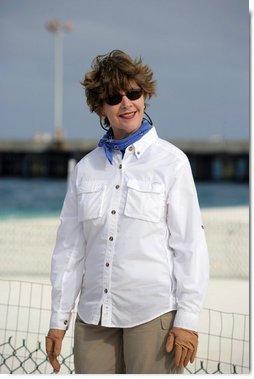