For Immediate Release
Office of the Press Secretary
February 27, 2007

I'm pleased to be with you today, and I'm really honored to stand with a personal friend and a man I admire a lot, the new Deputy Secretary of State, John Negroponte. 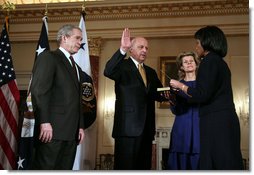 I, too, welcome John's family -- all five of them here, as well as his wife, Diana. I appreciate all his friends who have shown up. Thanks for coming to pay honor to this good man.

American diplomacy is really critical to ensuring the safety and the security of our citizens. Terrorist enemies follow an ideology of hatred and death. In the long run, the only way to defeat them is to offer a vision that is hopeful and positive and optimistic. Spreading that vision requires strong leadership here at the State Department, and John Negroponte has the talent and the experience our nation needs in a Deputy Secretary of State. He's going to do a superb job for the American people.

I appreciate very much Congresswoman Jane Harman for joining us. It's a great tribute to a good man. I appreciate the former Deputy Secretary of State, Rich Armitage, for being here. I'm honored that other members of my administration have come. I want to thank the members of the diplomatic corps. I'm proud to see you all here. Thanks for coming. Distinguished guests, the folks who serve our nation here at the State Department.

As the Deputy Secretary of State, John Negroponte is going to play a key role, an important role, in shaping our foreign policy. He's going to help guide diplomats deployed around the globe. He will act as the chief operating officer of the State Department. He will work with Secretary Rice and the leaders of other federal agencies to ensure that America speaks with one voice.

John is uniquely qualified. As America's first Director of National Intelligence, John took on one of the most demanding assignments in government. His work was to ensure that all our intelligence agencies function as a single, unified enterprise. He handled this vital task with skill and determination. His leadership of the intelligence community improved our ability to collect, analyze, and share intelligence. His vigilance has helped keep the American people safe from harm.

One of my regrets is that, in him coming back to the State Department, is he won't be in the Oval Office every morning to share his wisdom with me. He has plenty of wisdom to share. I strongly urge the young Foreign Service officers to get on his calendar so he can explain to you how best to do your job. (Laughter.) I did the same thing. (Laughter.)

Over the course of more than four decades, he's held eight Foreign Service posts, three different continents. He served as the Deputy National Security Advisor to President Ronald Reagan. He represented America at the United Nations during my administration. He was our first Ambassador to a free Iraq. In these and other posts, he has shown diplomatic skill and devotion to our country. He really has set a great example for the people who work here.

Over the past six years, I know him to be a man of vision and character. He understands the importance of fighting the extremists with all elements of national power. He is a good negotiator. It doesn't hurt that he can play a mean game of poker. (Laughter.) As one of our -- as our nation's second-ranking diplomat, he's going to be a strong and confident advocate for our interests and, equally importantly, our ideals around the world.

John is going to build upon the work done by his predecessor, Bob Zoellick. Bob helped lead the State Department during a challenging time for our nation. He upheld the high standards and the proud tradition of this department. I appreciate his dedicated service.

As John takes up his duties, he's going to benefit from the talent and professionalism of the men and women in our foreign and civil service, folks who serve in this building and in our embassies around the world. The work done here and the work done abroad helps sustain America's position; it fosters freedom and helps advance the cause of peace.

I want to thank you for your willingness to serve our country. I appreciate the sacrifices you make on behalf of the American people.

You're going to have a fine leader in John Negroponte. One thing is for certain: He knows we live in challenging times; we live in dangerous times. He also knows that this is a moment of great hope and opportunity. John's broad experience and sound judgment and unquestioned integrity will make him an outstanding Deputy Secretary of State.

And so, John, I thank you once again for agreeing to serve our nation. Congratulations.

And now Secretary Rice will administer the oath.

DEPUTY SECRETARY NEGROPONTE: President Bush, Secretary Rice, colleagues and friends: It's an extraordinary privilege for me to stand before you today as Deputy Secretary of State.

When I first entered this building, on October 5, 1960, I could not have dreamed that I would enjoy such a rich, varied career, capped by this great honor. Dwight Eisenhower was President, the Cold War was in full stride, and the United States was involved -- minimally involved in what would become the dominant issue of the 1960s, Vietnam.

I devoted many years during the first phase of my career to Vietnam. That seems like -- and was -- a long time ago. The fact that the United States and Vietnam now enjoy a positive, constructive relationship gives me great satisfaction.

Since then, through the course of assignments in Latin America, Europe, Asia, the Middle East, and at home, I have benefitted from the incredible support of my wife, Diana, and our five wonderful children -- Marina, Alejandra, John, George, and Sophia. We are a Foreign Service family. As Deputy Secretary, I will make supporting Foreign Service families a personal priority.

Mr. President, your freedom agenda frames the mission of the Department of State. I am in your debt for asking me to help you and Secretary Rice implement it.

Madam Secretary, your vision of transformational diplomacy, extending our diplomatic reach to engage the 21st century challenges where they are most demanding, will guide me in my efforts.

I am delighted to say that the President and the Secretary also will be supported by the 132nd class of new Foreign Service officers who are joining the Department of State along with me. They took their oath of office last Friday, and it is my pleasure to present them to you, Mr. President. This group of 69 patriotic Americans possesses impressive academic, professional and international credentials and expertise. One of them speaks a language that I didn't know existed -- (laughter) -- while others have mastered Arabic, Mandarin, Japanese, and many other critical foreign languages, so they are ready to go where our diplomacy needs them the most.

Having served in remote one-officer posts in countries in conflict, I appreciate the hazards the personnel of the Department of State confront. Many of us face real danger around the world today. I saw that as United States Ambassador to Iraq, as I saw it 40 years ago in Vietnam, and 20 years ago in Central America.

But there are rewards in these risks, and it is important to keep in mind that we take them for compelling reasons. America's freedom, security, and values are at stake. That is why I am confident we can continue to recruit, train and support new generations of American diplomats, just as qualified and capable as the 132nd class of Foreign Service officers.

When I retired from the Foreign Service in 1997 and entered the publishing business, I did so with a sense of fulfillment and completion. All in all, I thought I had had a pretty good run. Little did I know, Mr. President, that you would call me back to public life with four unique opportunities to serve our great nation. Perhaps only a long career in the Foreign Service, where every new country and culture is a stern test, could have given me the experience I needed to draw on as your Ambassador to the United Nations, your Ambassador to Iraq, the Directorship of National Intelligence, and now, Deputy Secretary of State.

So thank you, Mr. President, and thank you, Madam Secretary, for inviting me to help adapt our diplomacy to a new era full of so much challenge, change, and opportunity for the American people, and for our friends and allies around the world.