For Immediate Release
Office of the Press Secretary
February 26, 2007

THE PRESIDENT: Thank you all. Please be seated. I'm looking for some of the crumbs that got dropped last night here. (Laughter.) Glad you're here, thanks for coming. I hope you enjoyed the dinner as much as we did last night. (Applause.) I thought it was a good, relaxing evening. And I thank you all for joining us today. 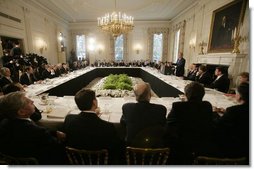 I want to thank the members of my Cabinet for talking to the governors about how important it is for us to work together. I do want to spend some -- a little time talking about some issues here, and then I'll answer questions from you.

First, obviously -- well, I don't know if it's obvious to you, or not, but my biggest concern is protecting this country. You got to know something, that a lot of my thinking was defined on September the 11th. I wake up every day thinking about another attack. And that's my job. It's what the people expect. I think about how to have the best intelligence possible to find out where the enemy is and what they're thinking so we can react.

I think about making sure that Homeland Security and our states work closely together. I wish that wasn't the way it was. But it is. That's the reality of the world in which we live. It's easy to kind of hope that these radicals and extremists go away. We've got a two-pronged strategy in dealing with them; one is to stay on the offense and bring them to justice, and two, spread the conditions necessary to defeat an ideology of hatred. I like to say we're in an ideological war that's going to last a while. That's what I believe. That's the basis on which I'm making decisions to protect the country.

I thank you very much for going over to visit the Guard troops and Reserve troops from your states that are there. I appreciate it. It matters to those troops that you take time as a Commander-in-Chief to thank them. And it matters to their families that people are paying attention to them.

You've got two governors who are active in the Guard and Reserve -- Governor Blunt and Governor Sanford. He's not here because he's at a Air Force Reserve meeting, as I understand, and I appreciate very much the example you all are setting.

Obviously, there's concerns about the decisions I have made regarding Iraq, and I understand that. Look, I mean, there's a lot of debate here in Washington, D.C. And if you want, we can spend some time during the question-and-answer talking about why I made the decisions I made. But you've just got to understand, the main reason why is because I understand the consequences of failure in Iraq. If we leave before that country can govern itself and sustain itself and defend itself, there will be chaos. And out of chaos will come vacuums; and out of vacuums will come an emboldened enemy that would like to do us harm. I like to remind people that if we leave Iraq before the job is done, the enemy will follow us here. And if our job is to protec this country, it's important we get it right in Iraq. 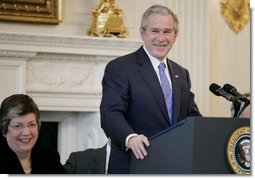 So I made a decision that I think is more likely to succeed than any of the alternatives that were presented to me. And I know you're concerned about the funding for your troops; so am I. I hope out of all this debate -- and by the way, there is -- you've just got to understand, here in Washington, I do not believe that someone is unpatriotic if they don't agree with my point of view. On the other hand, I think it's important for people to understand the consequences of not giving our troops the resources necessary to do the job.

I understand Pete Pace was here and visited with you. I hope he was able to answer your questions about Guard funding. We submitted a strong budget for 2008. And we're going to need your help to make sure Congress keeps that budget intact. The temptation sometimes is take a little bit from the defense and add it to here. And if you're concerned about making sure your troops get what they need, make sure you call your congressman, or your senator.

I wish I had the line-item veto like you all do -- or some of you do. It makes it easier to deal with the issues like earmarks or these interests that get stuffed into these bills at the last minute without having been debated. And I'm going to keep working with Congress to try to get a line-item veto. If you want to give the President a hand, you might suggest to Congress to let me have the tools that many of you have in this room. You know it works; it makes sense. It helps keep those budgets lean and focused and having the priorities real clear. 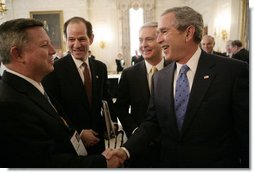 I'm looking forward to working with Congress on health care. I know that Michael has been spending some time with you. I firmly believe, and I know Mike agrees, that the states are oftentimes the best place to reform systems and to work on programs that meet needs. We believe one of the biggest needs is to make sure private health insurance is available to a lot of folks in our country. And so the Affordable Choices program is a real program. And I thank Mike for spending time with you talking about it and wanting to work with you to get it designed properly so it works.

And I also strongly believe we need to change our tax code. It's a tax code that says, if you're single, or you're working for a company that doesn't provide insurance, you're discriminated against relative to the person working for a big corporation. And it doesn't make sense. You want people to be able to have health insurance, to be able to afford private insurance. It makes sense to reform the tax code.

We look forward to working with you on that; look forward to working with you and Congress on reauthorizing No Child Left Behind. I know Margaret talked about it. The real challenge facing this country is whether or not we're going to be competitive; whether or not we've got the skill set necessary to fill the jobs of the 21st century. If we don't, they'll go elsewhere. That's just what happens in a globalized world.

No Child Left Behind is the beginning of a comprehensive competitive program, and we want to work with you to make sure it works properly, to make sure that accountability is used properly. The thing I like most about the law is that when we find a youngster who is struggling with reading, that we provide extra help to make sure he or she gets up to speed early, before it's too late. I also like the idea of us being able to say we're making progress toward high goals. And we know we are, or we know we aren't if we're not, because we measure. I don't see how you can fix a problem unless you measure the problem.

I'm looking forward to working with Congress on energy policy. We've made some progress through comprehensive energy bills. There's more to be done. We've spent about $12 billion since I've been the President on technologies that will enable us to become less dependent on oil. We're going to continue to invest, by the way, in clean coal technologies and solar technologies and wind technologies. But the area where we're pretty close to some amazing breakthroughs is on getting -- changing our usage of gasoline. Some amazing battery technologies that are now heading toward the market, which will enable people in New York City, for example, to drive the first 20 to 40 miles on electricity. That will make us less dependent on oil from overseas.

Another exciting technological breakthrough is going to come with cellulosic ethanol. It's a long, fancy word for making gasoline -- or making ethanol out of product other than sugar and corn, like switchgrass or wood chips. The ethanol production from corn is full-steam ahead, but it's beginning to squeeze some of the hog farmers and cattle raisers. And therefore, we're going to have to accelerate research into alternative feedstocks for ethanol, to enable us to meet a goal I set, a mandatory goal of using 35 billion gallons of alternative sources of fuel by 2017. It reduces our gasoline consumption by 20 percent over the next 10 years.

I wouldn't have put out the goal if I didn't think it was possible and achievable. I also know it's necessary. Becoming less dependent on oil is in our national security interests, it's in our national economic interests, and will enable us to be better stewards of the environment.

I believe we can find a lot of common ground with the Congress on these issues. I've had some good meetings with the Democrat -- Democratic leadership. I appreciate the openness of our discussions. I'm -- will continue to reach out to find common ground, with them and, as well, with you. We owe it to the people to do so.

Anyway, thanks for giving me a chance to come by. I appreciate it. (Applause.)