For Immediate Release
Office of the Press Secretary
February 26, 2007

THE PRESIDENT: Welcome. I am pleased that you all are here on a very special day. Presenting the Medal of Honor is one of the great privileges for the President. The medal is the highest military decoration a President can confer. This medal is awarded for actions above and beyond the call of duty. 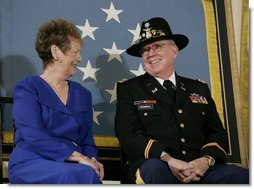 Today I am proud to bestow this medal on a daring pilot, a devoted soldier and a selfless leader, Lieutenant Colonel Bruce Crandall. I welcome Bruce and his wife, Arlene, back to the White House. I congratulate you on 50 years of marriage. She must be a patient woman. (Laughter.) I also am glad that their three sons and three of their grandchildren are here. Welcome. I'm especially pleased that some of Bruce's comrades have joined us.

As an officer, Bruce always put his men before himself. Today, his men are here for him. And this afternoon, 41 years after his heroic actions in Vietnam, America recognizes Bruce Crandall with our highest award for valor, the Medal of Honor.

I appreciate very much Dr. Fran Harvey, Secretary of the Army; General Pete Pace, Chairman of the Joint Chiefs; General Pete Schoomaker, Chief of Staff of the United States Army.

I thank all the other members of the military who joined us. I particularly want to say thanks and welcome to the Medal of Honor recipients who are with us today: Harvey "Barney" Barnum, Bob Foley, Jack Jacobs, Joe Marm, Bob Patterson, Al Rascon, Gordon Roberts and Brian Thacker. Welcome.

I appreciate the family, friends and comrades of Bruce Crandall. David Hicks, thank you for your blessings.

The journey that brought Bruce Crandall to this day began 74 years ago in Olympia, Washington. Growing up, Bruce was a gifted athlete and a bit of a handful. (Laughter.) A teacher once observed that he had "a unique ability to get into trouble and out of trouble without any trouble at all." (Laughter.) At Olympia High School, Bruce was named an All American in baseball. He batted .612 for the league champs -- I think we better check the scorecards. (Laughter.) His dream was to be drafted by the New York Yankees. Instead he got drafted by the U.S. Army. (Laughter.) 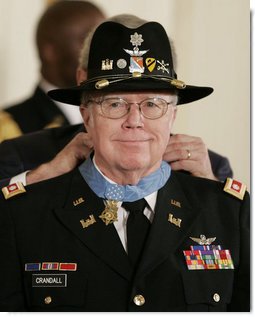 He was commissioned as an officer, trained as an aviator. His early career took him on mapping missions over Alaska, and North Africa, and Latin America. In 1963, he reported to Fort Benning to help lead a new unit that would become known as the air cavalry. Two years later, he arrived in Vietnam as a major, and as a commanding officer in the 229th Assault Helicopter Battalion.

As a leader, Major Crandall earned the respect of his men with his honesty and his humor. He earned their admiration with his remarkable control over a Huey. His radio call sign was "Ancient Serpent 6," which his men shortened to "Old Snake." (Laughter.) Or sometimes, they used a more colorful nickname -- (laughter) -- which we better not pronounce. (Laughter.)

On the morning of November 14, 1965, Major Crandall's unit was transporting a battalion of soldiers to a remote spot in the la Drang Valley, to a landing zone called X-Ray. After several routine lifts into the area, the men on the ground came under a massive attack from the North Vietnamese army. On Major Crandall's next flight, three soldiers on his helicopter were killed, three more were wounded. But instead of lifting off to safety, Major Crandall kept his chopper on the ground -- in the direct line of enemy fire -- so that four wounded soldiers could be loaded aboard.

Major Crandall flew the men back to base, where the injuries could be treated. At that point, he had fulfilled his mission. But he knew that soldiers on the ground were outnumbered and low on ammunition. So Major Crandall decided to fly back into X-Ray. He asked for a volunteer to join him. Captain Ed Freeman stepped forward. In their unarmed choppers, they flew through a cloud of smoke and a wave of bullets. They delivered desperately needed supplies. They carried out more of the wounded, even though medical evacuation was really not their mission.

If Major Crandall had stopped here he would have been a hero. But he didn't stop. He flew back into X-Ray again and again. Fourteen times he flew into what they called the Valley of Death. He made those flights knowing that he faced what was later described as an "almost unbelievably extreme risk to his life." Over the course of the day, Major Crandall had to fly three different choppers. Two were damaged so badly they could not stay in the air. Yet he kept flying until every wounded man had been evacuated and every need of the battalion had been met. 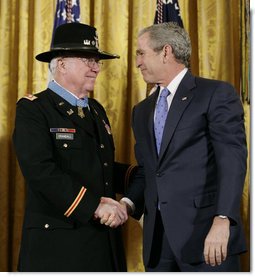 When they touched down on their last flight, Major Crandall and Captain Freeman had spent more than 14 hours in the air. They had evacuated some 70 wounded men. They had provided a lifeline that allowed the battalion to survive the day.

To the men of la Drang, the image of Major Crandall's helicopter coming to their rescue is one they will never forget. One officer who witnessed the battle wrote, "Major Crandall's actions were without question the most valorous I've observed of any helicopter pilot in Vietnam." The battalion commander said, "Without Crandall, this battalion would almost have surely been overrun." Another officer said, "I will always be in awe of Major Bruce Crandall."

For his part, Bruce has never seen it that way. Here's what he said: "There was never a consideration that we would not go into those landing zones. They were my people down there, and they trusted in me to come and get them."

As the years have passed, Bruce Crandall's character and leadership have only grown clearer. He went on to make more rescue flights in Vietnam. He served a second tour, and he retired from the Army as a lieutenant colonel. As a private citizen, he's continued to serve. He's worked in local government, and he speaks to students all across our country. One of his favorite stops is Midland, Texas. (Laughter.) It happens [to be] where Laura and I grew up. In fact, he's been to Midland so many times they gave him the key of the city. It's not exactly the Medal of Honor. (Laughter.) It's not a bad thing to have. (Laughter.) Maybe one day I'll get a key to the city. (Laughter.)

A few years ago, Bruce learned he was being considered for our nation's highest military distinction. When he found out that Captain Freeman had also been nominated, Bruce insisted that his own name be withdrawn. If only one of them were to receive the Medal of Honor, he wanted it to be his wingman. So when I presented the Medal to Captain Freeman in 2001, Bruce was here in the White House. Captain Freeman wished he were here today, but he got snowed in, in Iowa. His spirit is with us. Today the story comes to its rightful conclusion: Bruce Crandall receives the honor he always deserved.

In men like Bruce Crandall, we really see the best of America. He and his fellow soldiers were brave, brave folks. They were as noble and selfless as any who have ever worn our nation's uniform. And on this day of pride, we remember their comrades who gave their lives and those who are still missing. We remember the terrible telegrams that arrived at Fort Benning, the families devastated, the children who traced their father's name on panel three-east of the Vietnam Memorial wall. 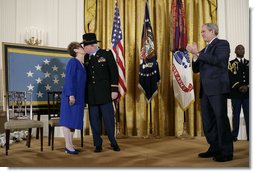 Our sadness has not diminished with time. Yet we're also comforted by the knowledge that the suffering and grief could have been far worse. One of the reasons it was not is because of the man we honor today. For the soldiers rescued, for the men who came home, for the children they had and the lives they made, America is in debt to Bruce Crandall. It's a debt our nation can never really fully repay, but today we recognize it as best as we're able, and we bestow upon this good and gallant man the Medal of Honor.

(The citation is read and the medal is presented.) (Applause.)