For Immediate Release
Office of the First Lady
February 22, 2007

Mrs. Bush's Remarks in a Press Availability After a Visit to a Boys and Girls Club of Gulf Coast Program
D'Iberville Elementary School
D'Iberville, Mississippi

MRS. BUSH: I just want to tell you -- you all have been with me, most of you, all day, so you know what the themes of the day were. First we started with the Katrina cottages, talking about housing. Then we went on to a lunch where I met with school people from around the Mississippi Gulf Coast, schools that were totally destroyed, and some schools that were all right but had to take in all the other children in their community because they might have been the only school that wasn't totally destroyed. 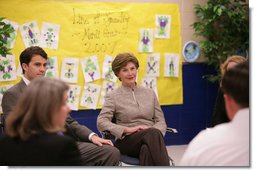 We talked about the responsibility of teachers and principals to their communities, and the responsibility they feel to their children, all the children across the Gulf Coast and how important school is for children to have a normal life and a normal routine. And for children who have suffered the trauma that these children have, that have left their houses or stayed in their houses while the hurricane has come, school offers the real routine and the normalcy of a life. And so it's very, very important that schools get rebuilt all across the Gulf Coast and that more children can come back to their home communities and go to school in their home communities.

Then, of course, we're here. The third event of today is really celebrating the Boys and Girls Club. But they represent all of the many volunteer charitable faith-based organizations that are all across the Gulf Coast that are working with children and adults to help children and adults really regain a sense of community and a sense of being able to build their lives. And as you can see from what these kids did today, from what they talked about and what they expressed to us with their safe pieces of fabric that they have, it's something that they can take and hold in their hand or keep in their pocket to remind them when they need to think about a safe place that they have a safe place.

So what, I think, all of us learned -- I certainly learned today and I hope you did, too, when you heard each other's stories -- is how important we are to each other, and how if we have each other, we have a lot. If we have our mothers and our brothers and sisters and our animals and our friends at school, we have, really, the most important relationships that anybody can have.

So I want to thank everybody. Thank you all, everybody who's traveled around with me today. I want to encourage, again, the people of the Mississippi Gulf Coast. I know it's wearying. I know that it's hard for people, especially the ones who have been in a FEMA trailer for all this time. But I also can see great signs of progress, and I know maybe if you're here, and you're here every single day, you don't see it, but for me when I come back every six weeks or every month or so I really can see some signs of progress, a lot of rebuilding.

And so I'm encouraged. I know it's going to take a long time, but I'm encouraged that people are going to be able to do it. And I admire the people down here a lot on the Gulf Coast for their character, for their enthusiasm, for their strength as they face all of the challenges that they're facing.

Q Mrs. Bush, can you tell us just real briefly the changes that you've heard today in these children, and from the first time that you visited here?

MRS. BUSH: Well, I think it's very interesting. The interesting part is they're still thinking about what happened during the hurricane, and it's now been, what, 18 months, it's been quite a while. But it takes a long time to deal with the loss that you suffered, that you all suffered on the Gulf Coast, and that each individual suffered when they lost their home or their toys or their school or their animals. And those are all griefs that everybody down here suffered to some extent.

And what we're seeing is that it takes a long time, but we're also seeing that people can call upon their own inner resources to think about the place that they're safe, to think about the people, like their grandmother, who make them feel safe. And that's encouraging, I think.

So I think people are really starting to be able to deal with it. I know it's hard. It's hard to keep the energy going that you need to, every day, face the challenges that you have to face. But we're finding out people can do it. And I think that's really encouraging.

Q Mrs. Bush, you've also been a real advocate for the libraries, which were hit especially hard down here. Have you had an opportunity to see their progress?

MRS. BUSH: Yes, and in fact, three of the schools that were represented at the luncheon are schools that got Laura Bush Foundation Grants to rebuild their libraries. Right now we're waiting for our next round of applicants. We've given 40 grants all along the Gulf Coast, from Florida, actually, Pensacola School got it, to a Port Arthur school in Texas, and then a lot across Mississippi and Louisiana. These are grants, big grants, large amounts of money that will pay for a full elementary school library or high school library. 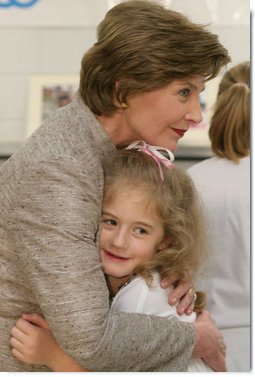 And I want to encourage schools across the Gulf Coast -- public and private -- to apply for these grants when you're ready, when your school is rebuilt and you're ready to stock your library, to start applying, because right now we have more money than applications. But I expect as schools get rebuilt and as they get ready to stock their libraries we'll get more grants, grant applicants.

Q Is there anything that you will take back to the President from this trip?

MRS. BUSH: Sure, I want to tell him a lot of things that I saw today. Of course, I want to tell him about my admiration for school people -- he knows that -- but also about what the different children here said. I think he'll love to hear the story about somebody who went fishing -- (laughter) -- to feel safe and to be relieved and went fishing with her dogs and her little sister. I think that's a very sweet story that he'll like.

I also want to tell him how encouraged I am, and that I think -- I know that it's difficult, but that I can see people are working hard and taking each one of the steps that they need to take to get where everyone wants them to be, and that is a rebuilt Gulf Coast with safe places for children and good schools for children and jobs for their parents.

Q What were your thoughts on the Katrina cottages? What did you think about those?

MRS. BUSH: I liked those. They seem -- they're very nice. They're surprisingly -- they look so small, the feel of them inside is comfortable and not as small as you think it might be, partly, I think, because the ceilings are high. I really do believe that the Gulf Coast is going to end up being an innovator for the rest of the world, certainly for the United States as we talk about ways to do quick and affordable but still sturdy and safe housing for people. And all of these designs, some of the designs with the Mississippi Recovery Committee that talk about community and the way to design urban areas so that there is a chance for community, as well as these designs for houses that can be put together quickly but that are safe at hurricane strength, and can be added on to, in a way, when you have the money to start adding on to them in a safe and aesthetically attractive way.

But I also know that for the developing world, there are parts of the developing world that are desperate for housing, that these small houses would be very, very nice houses. And I think it's -- on the Gulf Coast, we really have the chance to innovate, to figure out green and safe and energy-efficient ways, below-cost ways to rebuild that will be an example for the rest of the world. 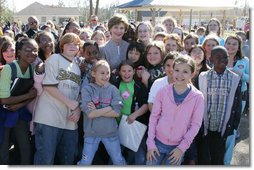