For Immediate Release
Office of the Vice President
February 21, 2007

Vice President's Remarks at a Rally for the Troops
USS Kitty Hawk
Yokosuka Naval Base, Japan

THE VICE PRESIDENT: Thank you. (Applause.) Thank you very much. Thank you, Admiral Crowder, and thank you for the introduction, and thank you all for the warm welcome to this great American carrier.

It's good to see all of you, and it's a real privilege for me to visit the USS Kitty Hawk. This fine ship's company is comprised of sailors from across the United States -- from New York to California -- and even from my own home state of Wyoming. It's a small contingent. (Laughter.) But it's all quality. (Laughter.) And you'd think there'd be more, given Wyoming's broad coastline and maritime traditions. (Laughter.) 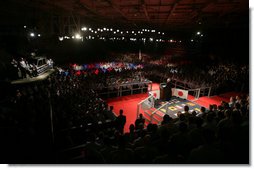 I want every one of you to know that your country is proud of you and that we appreciate your service -- just as we appreciate the sacrifices of your families. And I'm honored to bring the respect and good wishes of the Commander-in-Chief, President George W. Bush. (Applause.)

The President wanted me to make this journey, first to Japan, and then to Guam and Australia, in order to pay our respects to two great allies of the United States, and to reaffirm America's deep commitment to a forward presence in the Asia-Pacific region.

Throughout this region our country has interests, and treaty obligations, and commitments of conscience. To meet these responsibilities we need safe and unimpeded movement on the seas, and bases for our ships and personnel. From our Pacific bases we stand ready to defend our allies and our friends. We keep the shipping lanes open for trade, which is the economic lifeline for so many countries. We keep an eye out for those who try to move deadly weapons across these waters. And we bring relief to the victims of natural disasters. The United States is a powerful country -- and also a decent, generous country. Our presence helps to ensure the peace and the stability in a strategic part of the world. America does the job well -- and for that, we can thank the men and women of the United States military. (Applause.)

Our nation is grateful, as well, to the people of Japan. Our two countries share common values and strategic objectives. Our forces work closely together -- and some of the most important joint exercises are carried out right here at this base. We stand beside each other as allies, but we are more than that. Relations between our two countries have never been better than they are today. The United States of America is proud to call Japan one of our closest allies. 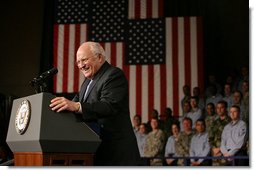 In recent years, our forces have served together in Afghanistan and Iraq, and Japan has been one of the largest donors toward the reconstruction effort in those two countries. Indeed, when the United States was attacked September 11th, 2001, Japan made clear its firm commitment to joining the fight against terror. Japan has honored that commitment. As great democracies, Japan and the United States understand our duties in the world. Sometimes these duties are hard and dangerous, but we accept them. And none is more pressing than the fight against global terror.

The USS Kitty Hawk was in the fight early. Just weeks after 9/11, she was deployed to the North Arabian Sea in support of Operation Enduring Freedom. Later, in the campaign to liberate Iraq, the Kitty Hawk traveled 29,000 nautical miles, and more than five thousand sorties were flown from the deck above us. Since the war began, we've struck major blows against the al Qaeda network that hit America on 9/11. We've removed two dictatorships that sponsored terror, liberated 50 million people from tyranny and stood by young democracies, as America always does.

The work goes on, because the set of challenges that arrived on 9/11 is unlike any other the nation has ever faced. This war is not a matter of finding an opposing army and engaging it, or finding a navy and sinking it. The terrorist enemies are hidden and dispersed, and they view the entire world as a battlefield. They are determined to commit indiscriminate murder against innocent, unsuspecting men, women, and children. They serve an ideology that rejects tolerance and demands total obedience. It's an extreme and a hateful ideology -- and it's what drove 19 men to get on airplanes and come kill 3,000 Americans. These enemies want to seize control of a country in the Middle East, so they can acquire a base for launching attacks, and oil wealth to finance their ambitions. They want to target and overthrow other governments in the region, and eventually to establish a totalitarian empire that encompasses the region from Spain, across North Africa, through the Middle East and South Asia, all the way to Indonesia. And it would not stop there.

To serve that goal, the terrorists have declared an intention to arm themselves with chemical, biological and even nuclear weapons, to destroy Israel, to intimidate free countries and to cause great harm to the United States. The terrorists' vision is one of murder and enslavement. Our vision is one of humanity and freedom. And so we are their prime target. They hate us, they hate our country, they hate the liberties for which we stand. They want to destroy our way of life, so that freedom no longer has a home and a defender in this world. That leaves us only one option: to rise to America's defense, to take the fight directly to the enemy, and to accept no outcome but victory. (Applause.) 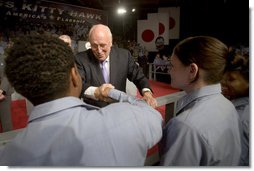 The terrorists have made Iraq the central front in this war. And right now our new force commander in Iraq, General Dave Petraeus, is carrying out a new strategy for victory on that front. We're moving in to help Iraqis clear and secure Baghdad, to help them protect the local population, and to ensure that the Iraqi forces will be capable of providing the security necessary in their capital city. As General Petraeus said, "the way ahead will be neither quick nor easy, and there will undoubtedly be tough days. We face a determined, adaptable, barbaric enemy. He will try to wait us out. In fact, any such endeavor is a test of wills, and there are no guarantees."

The General has it exactly right. The terrorists know they cannot beat us in a stand-up fight. They never have. The only way they can win is if we lose our nerve and abandon our mission. So they continue committing acts of random horror, believing they can intimidate the civilized world and break the will of the American people. Bin Laden continues to predict that the people of the United States simply do not have the stomach to stay in the fight against terror. He refers to Iraq as the "third world war," and he knows the stakes as well as we do. If the terrorists were to succeed, they would return Iraq to the rule of tyrants, make it a source of instability in the Middle East, and use it as a staging area for even more attacks. The terrorists also know that as freedom takes hold, the ideologies of hatred and resentment will lose their appeal, and the advance of liberty and self government in the broader Middle East will lead to a much safer world for our children and our grandchildren.

This nation has learned the lessons of history. We know that terrorist attacks are not caused by the use of strength; they are invited by the perception of weakness. We know that if we leave Iraq before the mission is completed, the enemy is going to come after us. Having seen our interests attacked repeatedly over the years, and knowing the ambitions of the terrorists, this nation has made a decision: We will engage these enemies. We will face them far from home, so we do not have to face them on the streets of our own cities. 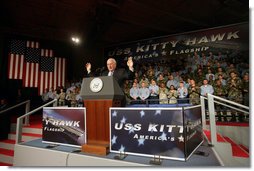 Every member of our military can be certain that America will stay on the offensive in the war on terror. The President of the United States and his national security team understand the threat -- the enemy's changing tactics and its unchanging nature. We are not dealing with adversaries that will ever surrender or come to their senses. We will be flexible. We'll do all we can to adapt to conditions on the ground. We'll make every change necessary to do the job. And I want you to know that the American people will not support a policy of retreat. (Applause.) We want to complete the mission, we want to get it done right, and then we want to return with honor.

As I look at each of you here in the hangar bay, there is no way I could overstate how much your service means to our country. The Navy knows how to train and prepare for whatever assignment may come, and it takes an incredible amount of work to make an aircraft carrier operational for the next mission. Especially a great ship like this that I know takes a lot of care and feeding each and every day.

The work goes on around the clock, seven days a week. And every one of you is here for a reason -- you have a job that has to be done well, whether or not anyone sees it or not. All hands contribute -- from the Grapes on the flight deck, to the B.T.'s in the fire room -- (applause) -- from culinary specialists, to the CT's -- (applause) -- to the intel specialists, to the storekeepers. (Applause.) Your service makes a difference for a nation at war and improves the chances that one day we'll be a world at peace.

That will always be the case, so you'll always be able to take pride in your service in the Seventh Fleet of the United States Navy. Our country is doing good and honorable work in a messy and a dangerous world. By defending ourselves and standing with our friends, we're meeting our responsibilities. The cause we serve is freedom. That cause is right. That cause is just. And that cause will prevail. (Applause.)

Thank you for what you do for all of us. (Applause.)