For Immediate Release
Office of the Press Secretary
February 19, 2007

275th Anniversary of the Birth of George Washington

THE PRESIDENT: Thank you all for coming. Laura and I are honored to be with you in this historic place, on this special anniversary. I feel right at home here. After all, this is the home of the first George W. (Laughter.) I thank President Washington for welcoming us today. He doesn't look a day over 275 years old. (Laughter.) 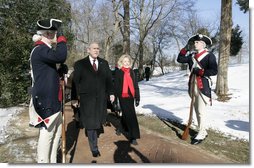 We're really glad you're here. I look out and see a lot of the kids who are here today. (Applause.) When I was your age, I was a little fellow from Midland, Texas -- (laughter and applause) -- and my grandmother brought me here. And then Laura and I brought our daughters here. And the reason I bring this up, this is a good place for Americans to come and bring your families. And we welcome you here today.

You know, we're celebrating around the country President's Day, but the folks that work here call it Washington's birthday. (Applause.) We've been celebrating this holiday for more than two centuries, and this morning we continue this tradition by honoring a man who was our first President, the father of our country, and a champion of liberty.

You know, George Washington was born about 80 miles down the river from Mount Vernon in the year 1732. As a young man, he went West, and explored the frontier, and it changed his life. As he grew older, he became convinced that America had a great westward destiny as a nation of free people, independent of the empires of Europe. George Washington became the central figure in our nation's struggle for independence. At age 43, he took command of the Continental Army. At age 51, he was a triumphant hero of the war. And at age 57, he was the obvious and only choice to be the first President of the United States.

With the advantage of hindsight, it is easy to take George Washington's successes for granted and to assume that all those events were destined to unfold as they did. Well, the truth is far different. America's path to freedom was long and it was hard. And the outcome was really never certain. Honoring George Washington's life requires us to remember the many challenges that he overcame, and the fact that American history would have turned out very differently without his steady leadership.

On the field of battle, Washington's forces were facing a mighty empire, and the odds against them were overwhelming. The ragged Continental Army lost more battles than it won, suffered waves of desertions, and stood on the brink of disaster many times. Yet George Washington's calm hand and determination kept the cause of independence and the principles of our Declaration alive. 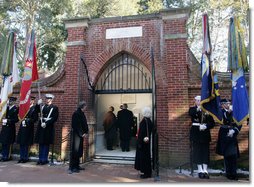 He rallied his troops to brilliant victories at Trenton and Princeton. He guided them through the terrible winter at Valley Forge. And he marched them to Virginia for the war's final battle at Yorktown. In the end, General Washington understood that the Revolutionary War was a test of wills, and his will was unbreakable.

After winning the war, Washington did what victorious leaders rarely did at the time. He voluntarily gave up power. Many would have gladly made George Washington the king of America. Yet all he wanted to do was return here to Mount Vernon, and to be with his loving wife, Martha. As he wrote with satisfaction to his friend Lafayette, "I am become a private citizen on the banks of the Potomac, and under the shadow of my own vine and my own fig tree."

George Washington's retirement did not last long. In the years after the Revolution, America's freedom was still far from secure. There were uprisings and revolts. States argued over their borders. And under the Articles of Confederation, the federal government was virtually powerless. With the United States in crisis, George Washington was called back to public life to preside over a Convention of the States. And the result was the United States Constitution and a new executive office called the presidency.

When the American people chose Washington for the role, he reluctantly accepted. He wrote a friend, "My movement to the chair of government will be accompanied by feelings not unlike those of a culprit who is going to the place of his execution." George Washington accepted the presidency because the office needed him, not because he needed the office.

As President, George Washington understood that his decisions would shape the future of our young nation and set precedent. He formed the first Cabinet, appointed the first judges, and issued the first veto. He also helped oversee the construction of a new federal city between the northern and southern states. The nation's new capital would take his name, and George Washington hoped it would inspire Americans to put the welfare of their nation above sectional loyalties.

This son of Virginia had come to see himself first and foremost as an American, and he urged his fellow citizens to do the same. More than two centuries later, the story of George Washington continues to bring Americans together. Every year, about a million people visit Mount Vernon to learn about this good man's life. We find the best of America in his spirit, and our highest hopes for ourselves in his character. His honesty and courage have become the stuff of legend. Children are taught to revere his name, and leaders to look to him for strength in uncertain times. 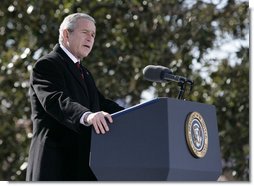 George Washington's long struggle for freedom has also inspired generations of Americans to stand for freedom in their own time. Today, we're fighting a new war to defend our liberty and our people and our way of life. And as we work to advance the cause of freedom around the world, we remember that the father of our country believed that the freedoms we secured in our revolution were not meant for Americans alone. He once wrote, "My best wishes are irresistibly excited whensoever in any country I see an oppressed nation unfurl the banners of freedom."

President Washington believed that the success of our democracy would also depend on the virtue of our citizens. In his farewell address to the American people, he said, "Morality is a necessary spring of popular government." Over the centuries, America has succeeded because we have always tried to maintain the decency and the honor of our first President.

His example guided us in his time; it guides us in our time, and it will guide us for all time. Thank you for coming, and may God bless. (Applause.) 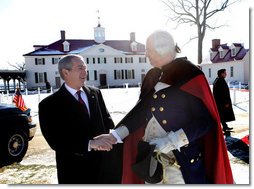