For Immediate Release
Office of the First Lady
February 15, 2007

MRS. BUSH: Thank you all, thanks so much. Thank you, Randy. Thank you, Ambassador Tobias. Thank you very much for that very kind introduction and for your words telling us what all of us can do, how we can join together to defeat malaria and other diseases and, at the same time, save lives. 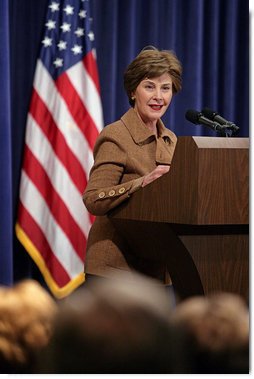 I want to acknowledge Admiral Ziemer. Thank you for your great work as Global AIDS Coordinator for USAID. Jay Hein, the Director of the Office of Faith-Based and Community Initiatives, for convening this conference, thank you very much for your great work. And Dr. John DeGioia, from Georgetown University. And John Bridgeland, thank you for working as the CEO of Malaria No More.

I want to welcome everyone here today. Thank you all for coming. Thank you for coming to see how your organization or your faith-based group can be involved in this fight against malaria, and what you can do individually and as a group, and what we can all do together to make sure people around the world can live healthy and successful lives.

In June 2005, President Bush launched the President's Malaria Initiative, a five-year $1.2 billion program to combat malaria in 15 of the hardest-hit African nations. Already, PMI is saving lives and spreading hope. Aid from the American people -- that's the American taxpayers -- has reached more than 6 million Africans. This year, 30 million more will receive lifesaving medicines, sprays and nets as the program expands. The Malaria Initiative also calls on developed countries, private foundations and volunteer groups to help reduce suffering and death caused by this disease.

Private sector institutions bring a fresh perspective and a personal touch to the fight against malaria, especially our community and faith-based organizations. In the United States, religious groups can enlist millions of volunteers and donors with their message of compassion and hope. In many African villages, churches are the only formal institutions that can manage malaria control and prevention. In malaria-prone regions, people look first to their churches, mosques or synagogues for help. They trust their pastors to provide it. We've just heard about the recent Gallup survey conducted in 18 African nations that asked citizens which social or political organization they trust the most. And overwhelmingly, people reported the greatest confidence in their religious institutions.

Our government is proud to partner with these organizations. At the White House Summit on Malaria in December, I announced the Malaria Communities Program, a $30 million initiative that will provide grants to African and American NGOs, as well as civic and religious groups, to support their malaria control efforts. The Communities Program will encourage charitable organizations already doing relief work in Africa to add malaria control to their services. It complements the efforts of African governments by creating independent, sustainable malaria control programs. And in villages throughout Africa, these initiatives can protect children and their families long after PMI sunsets.

The Malaria Communities Program builds on the lifesaving projects that churches and NGOs already have underway. Through Catholic Relief Services, millions of parishioners in the United States provide treatment, prevention and care to their brothers and sisters in Africa. Through the CORE group and the Inter-Religious Campaign Against Malaria, representatives of many faiths have united to develop national malaria control programs for Rwanda and Mozambique.

At the White House summit, with the help of Malaria No More, religious and community organizations made the commitment to fight against malaria. Muslim and Jewish organizations pledged to mobilize their communities. The National Council of Churches will use the World Wide Web to launch education campaigns and to collect online donations. Rick Warren's Saddleback Church will recruit 100,000 volunteers who will help 2.5 million Africans combat malaria in their villages. Over the next three years, Episcopal Relief and Development will distribute one million long-lasting insecticide-treated nets in 16 countries in sub-Saharan Africa. They'll also train volunteers to monitor net distribution, and to make sure these resources are used effectively.

Religious groups add to the anti-malaria resources committed by the United States and our partner governments. And they heal the sick and suffering with the faith, hope and love that governments can't provide.

President Bush and I appreciate your work. We urge you and even more faith-based and community organizations to join these efforts. We also encourage religious and community groups to reach more people by using their resources strategically. By working with PMI, relief organizations, businesses, philanthropies, churches and NGOs, working together can save more lives.

We've already seen the benefits of this coordination. In Tanzania, the government's malaria program subsidizes bed net vouchers for pregnant women. Now through a partnership between PMI and Mennonite Economic Development Associates, the programs will be expanded to cover all of Tanzania's children.

Since the program was launched in late November, nets have been supplied to nearly 390,000 infants. The program will reach an additional 1.5 million babies every year. And in southern Angola, PMI recently joined with the government to launch a residential mosquito spraying program. PMI supplied the insecticide sprays, but it was the Christian Children's Fund that conducted all of the community education programs. CCF spread throughout rural Angola, teaching residents how mosquito sprays can save them and their children from malaria. CCF workers explained how spraying campaigns are conducted, and taught residents to prepare their homes by moving their furniture away from the walls. Thanks to the coordination between PMI and the Christian Children's Fund, 90 percent of the targeted families opened their homes to the spray, and more than 500,000 people were protected from malaria.

People of faith have always reached out to their neighbors in need. They've fed the hungry, cared for the neglected and healed the sick. They do these things not for their own benefit, but guided by the belief that every human life has value and dignity. By working together, and coordinating with PMI and other initiatives, people of faith can now help save millions of lives from malaria.