For Immediate Release
Office of the Press Secretary
February 12, 2007

THE PRESIDENT: Thank you all. Thanks for coming. Welcome to the White House. I'm so pleased that you all have joined us for the 81st celebration of African American History Month. During this special month we reflect on the many ways African Americans have shaped our nation's history, and we honor outstanding achievements by our fellow citizens. 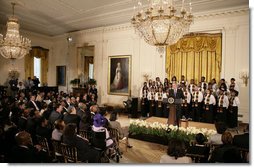 One of those achievements took place two Sundays ago in Miami, Florida -- took place at a football game. (Laughter and applause.) It might just have been a game for some, but for a lot of folks it was a moment, an historic moment. And we congratulate Tony Dungy and Lovie Smith for their strong leadership and their example -- (applause.) That's an achievement.

I'm also proud to be here with another football coach who deserves a lot of credit, Sylvester Croom, who is the head football coach from Mississippi State University. His achievement is the first African American coach in the Southeastern Football League -- Southeastern Conference. He was picked because he's a strong leader and a fine man. And I thank you for blazing trails. (Applause.)

I'm proud to be here with Condoleezza Rice, Secretary of State. (Applause.) So last night on this very stage, we celebrated Abraham Lincoln, and we welcomed Doris Kearns Goodwin, who wrote a book called, "The Team of Rivals." Abraham Lincoln surrounded himself with fine Cabinet officers, all of whom wanted one thing -- his job. (Laughter.) Not so fast, Madam Secretary. (Laughter.)

I appreciate so very much members of the Congress for joining us: first the Chairman of the House Ways and Means Committee, Charlie Rangel. (Applause.) That's an achievement. (Laughter.) I'm looking forward to working with this achievement to get some things -- (laughter) -- to get some things done. He's a good man and a smart guy.

Senator Norm Coleman from Minnesota. Senator, thanks for coming. (Applause.) From the U.S. Court of Appeals, D.C. Circuit, one of the most important benches in America, Justice Janice Rodgers Brown. Good to see you -- thank you. (Applause.)

I appreciate Doctor Dorothy Height. Thank you for coming, Dr. Height. (Applause.) Roslyn Brock, who is the Vice Chairman of the Board of Directors for the NAACP. Roslyn, it's great to see you. Thanks for coming. (Applause.) I'm proud you're here. Thanks for taking time.

I am so pleased that the Jackson High School Black History Tour Group from Jackson, Michigan, is with us, and Director Shirley Pitts. Thank you for coming. I'm looking forward to hearing you. I'm proud you're here. (Applause.)

The theme of this year's African American History Month is, "From Slavery to Freedom: Africans in the Americas." For hundreds of years, the people of Africa were brought -- were bought and sold by colonial merchants and transported as cargo to this hemisphere. The journey endured by millions of Africans is one of the largest migrations of history, and one of the great crimes of history. For the men, women, and children who survived this journey, life in the New World was a life in chains. They toiled for the bread that others would eat. They were often denied even the comfort of suffering together. And their families were broken up when a spouse or child was sold. 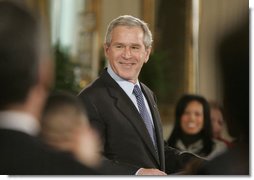 Yet despite these assaults on culture and humanity, the children of Africa persevered. They kept faith that the freedom that God intended for all would one day be theirs. And across this hemisphere in different places and at different times, that faith would be redeemed.

In America, their first real hope of freedom came on New Year's Day in 1863, when President Abraham Lincoln signed the Emancipation Proclamation in a room right upstairs. The heroes of the civil rights movement continued the struggle for freedom. And by their courage, they changed laws and opened up the promise for millions of our citizens.

Today, African Americans are seizing opportunities gained at great price, and they're making their mark in this wonderful country in countless ways. We see their character and achievement in the neighborhoods across our nation, and we see it right here in this room -- right here in the White House.

One of those faces is familiar to us, Wesley Autrey. You know, you might remember Wesley from the State of the Union address. I remember Wesley was I think sending a hand signal to you, Mr. Chairman. So was I, by the way. (Laughter.) I love you, man. (Laughter and applause.) Yes, not yet, Wesley. I've got to tell the story one more time. (Laughter.)

So in case you haven't heard the story, he was waiting at a Harlem subway station. He saw the guy fall into the path of a train. He had seconds to act. He jumped onto the track, and he pulled the man into a space between the rails, and he held him as a train went right over them. And so they said, you're a hero. He said, no. Yet, Wesley -- I told him -- I said, you're a hero. He told me, no. I said, Wesley, I disagree, as do millions of our fellow citizens. (Laughter.)

I want to tell you the story of Bonnie St. John. She grew up in California, which is -- most places in California are not very close to the snow. But she wanted to be a skier. The problem was at age five she lost one of her legs. But she never lost her dream. She said she fell down a lot while learning to ski, but she also learned the key to success was how fast she got up after the fall. 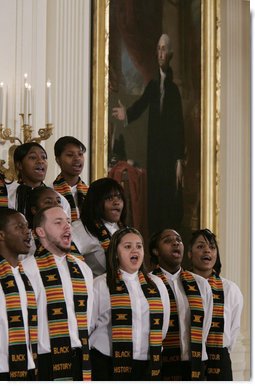 And so she went to Harvard and she became a Rhodes scholar. And then she won medals in downhill skiing in the Paralympics. She owns her own small business. She's writing an inspirational book to encourage others. She is the kind of person that you really want to be around, and the kind of person that shows that individual courage matters in life.

And so, Bonnie, thanks for coming. God bless. (Applause.)

So at one time in my life I was a baseball person. (Laughter.) Nearly all my life I was a baseball fan. And so I remember a pitcher named Jim "Mudcat" Grant. Some of you baby boomers might remember Mudcat. He pitched for the Minnesota Twins. They went to the 1965 World Series, and he won 25 games. He founded what's called the Black Aces. This is an organization made up of African American pitchers who have won at least 20 games in a single season.

I view the organization as a way not only to herald success, but to inspire others. See, it wasn't all that often -- let me just say this -- at certain points in our past, we didn't have a lot of African American pitchers. And I want to thank you, Mudcat, for showing courage, character and perseverance, and also thank you for setting an example.

With you today happens to be a -- I like to call him a former Texas Ranger -- Chicago Cub fans remember him as a Chicago Cub. Any baseball fan knows he's a Hall of Famer -- and that's Fergie Jenkins, a member of the Black Aces, as well as Mike Norris, former pitcher for the -- (applause.)

Mudcat, don't sit down yet -- sit up yet. Mudcat Grant, everybody. (Applause.)

Thank you, Mudcat, for bringing your friends, and thank you for bringing class to the baseball diamond. (Applause.)

We've got two folks here who know how to reach for the stars, and that would be Robert Curbeam and Joan Higginbotham. And I really mean that literally. See, these are astronauts who went into space with the crew of the Space Shuttle in early December. Their job was not much of a job, just to rewire the International Space Station. (Laughter.) It sounds complex. (Laughter.) And it is. It was one of the most challenging missions in NASA's history. 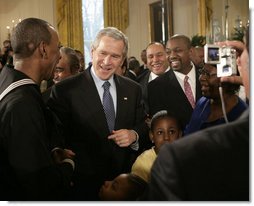 They did their job and, thankfully, came home. And in doing so, I suspect they've earned more frequent flier miles than anybody here. (Laughter.) I really appreciate the fact that they are furthering humanity's path of discovery, and I appreciate the fact that you say loud and clear, our country is unlimited in its opportunities for people from all walks of life. We're really proud you're here. Thanks for coming. (Applause.)

Tyrone Flowers is with us. His is an interesting story, one that speaks to a good heart, I suspect a gracious and glorious God, as well. You see, he was a basketball star, and he was headed for college and perhaps a scholarship. He was living the dream of a lot of folks. And he got shot, and he's paralyzed.

The interesting thing about this good man is a lot of people would have either quit or sought revenge. But not him. He picked a different path and found a different calling. He went to a community college. He earned a bachelor's degree. And then he became a lawyer. Nothing wrong with that. (Laughter.) Fourteen years ago, he and his wife founded a group called Higher M-pact. Higher M-pact has this goal: to help today's high risk urban youth become tomorrow's leaders. That is a noble goal. It is a necessary goal. And it's a goal that I suspect is more likely to be achieved because this good man has decided to turn a horrific act into an act of love. And we welcome you and thank you. (Applause.)

So as you can see, this is a little different kind of speech. It's one where all I had to do was just simply talk about the accomplishments and lives of some of our citizens. And their stories speak a lot louder and a lot clearer than I could have. This is a -- I always tell people the strength of this country lies in the hearts and souls of our citizens. The strength of the African American community has always lied in the hearts and souls of our citizens, people who refuse to allow adversity to diminish the spirit and extinguish the drive to make America live up to its promise.

And that's what we're honoring today -- ordinary citizens who do unbelievably fine things. I can't think of any better way to celebrate African American History Month. And our call -- and our need is to continue to remember promise belongs to everybody. And our call for this country is never to rest until equality is real, opportunity is universal, and every citizen can realize his or her dreams in the greatest country on the face of the Earth. 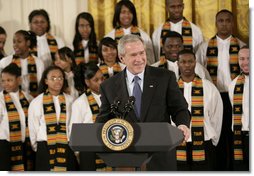 And now it's my honor to introduce the Jackson High School Black History Tour Group. Thank you for coming. (Applause.)