For Immediate Release
Office of the Press Secretary
February 5, 2007

President Bush Meets with the Cabinet
The Cabinet Room

THE PRESIDENT: I appreciate my Cabinet joining me today as we discussed our budget. Today we submit a budget to the United States Congress that shows we can balance the budget in five years without raising taxes.

Our economy is strong because of good policy and because the entrepreneurial spirit is strong. By keeping taxes down, we actually generate strong revenues to the Treasury. 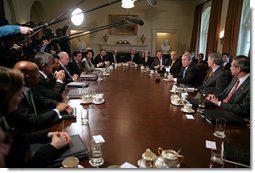 And I appreciate Director Portman helping us devise a plan that sets priorities and, at the same time, emphasizes fiscal restraint. Our priority is to protect the American people. And our priority is to make sure our troops have what it takes to do their jobs. We also have got priorities in national parks and education and health care. But we have proven, and I strongly believe Congress needs to listen to a budget which has no tax increase, and a budget, because of fiscal discipline, that can be balanced in five years.

And so the budget that Director Portman is going to be talking about is realistic, it's achievable, and it's got good reforms in it. So thank you very much. Looking forward to working with the Congress to get this budget passed.

Q Mr. President, thank you. You oppose setting time lines for withdrawal in Iraq, yet your new budget plan assumes that war spending will be down to $50 billion by 2009 and none beyond that. Are you, in effect, sir, setting a time line for the end of the war?

THE PRESIDENT: Ben, we've had years of projections in the past. We've said to the Congress, here's what our anticipated expenditure is in the short-term. And we've been able to manage our budgets with five years of war behind us, and we'll manage the budgets in the out-years. There will be no timetable set. And the reason why is, is because we don't want to send mixed signals to an enemy, or to a struggling democracy, or to our troops.

Q Mr. President, how do you respond to some criticism from the Iraqis that the reason for the recent escalation of violence in Iraq is because the United States has been too slow to implement its new strategy?

THE PRESIDENT: Well, General Petraeus is heading to Iraq this week, early this -- tomorrow. And my message is, is that both of us, the Iraqis and the U.S. and coalition forces, have got to get this plan in place as quickly as possible. Of course, we want the plan to work, and we want to make sure that the strategy we've implemented -- or the strategy we've outlined is implemented properly.

I appreciate the fact that the Iraqi government is anxious to get security inside the capital of the country. That's a good sign. It's a good sign that there's a sense of concern and anxiety. It means that the governments understands they have a responsibility to protect their people. And we want to help them.

What we're trying to do with this reinforcement of our troops is to provide enough space so that the Iraqi government can meet certain benchmarks or certain requirements for a unity government to survive and for the country to be strong.

I had to make a decision as to whether or not we were going to allow the status quo to continue. And the status quo wasn't acceptable. I listened to a lot of people in Congress as to whether or not we ought to slowly withdraw and redeploy troops. My worry about that was that the capital would get worse, and out of that chaos would come grave danger to the United States. And so I listened to a lot of other folks, including our military, and said, look, we got to take care and help these Iraqis take care of the violence inside of Baghdad.

And that's why I made the decision I made, and we're in the process of implementing that plan. We'd like to do it as quickly as possible. The success of that plan is going to depend upon the capacity and willingness of the Iraqis to do hard work, and we want to help them do that work. And the fact that government officials are now saying that it's time to start implementing the plan is a good sign. It shows that they understand that now is the time to do the things necessary to protect their people.