For Immediate Release
Office of the Press Secretary
February 1, 2007

American Heart Month, 2007
A Proclamation By the President of the United States of America


Heart disease is the leading cause of death in the United States, claiming hundreds of thousands of lives each year. During American Heart Month, we renew our commitment to fighting cardiovascular disease by increasing public awareness of this deadly disease and understanding of how it can be prevented.

Today, millions of Americans live with some form of cardiovascular disease, including congenital heart disease, coronary heart disease, and high blood pressure. Individuals can reduce their chance of developing these and other types of heart disease by exercising regularly, maintaining healthy eating habits and weight, avoiding tobacco use, and monitoring cholesterol and blood pressure levels. All Americans should speak with their doctors about the dangers of this disease and get regular preventive screenings. 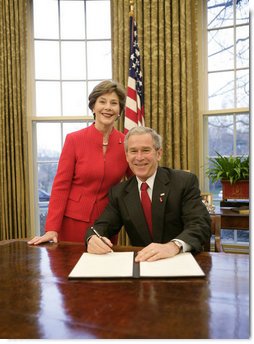 My Administration continues to help raise awareness of heart disease through initiatives such as "The Heart Truth" campaign, sponsored by the National Heart, Lung, and Blood Institute. First Lady Laura Bush serves as the National Ambassador of "The Heart Truth" campaign and works with partner organizations as part of her Women's Health and Wellness Initiative. The campaign informs women about the dangers of this deadly illness and encourages them to make cardiovascular health a priority. This year marks the fifth anniversary of the campaign, which uses the red dress as a symbol to remind women to protect their heart health and inspire them to take action. New data shows that fewer women are dying from heart disease, and more women are aware heart disease is the number one killer.

During American Heart Month, we honor the medical professionals, researchers, and all those whose tireless efforts are making a positive difference in the lives of those battling heart disease. By working together, we can continue to help the American people live longer and healthier lives.

In acknowledgement of the importance of the ongoing fight against cardiovascular disease, the Congress, by Joint Resolution approved December 30, 1963, as amended (77 Stat. 843; 36 U.S.C. 101), has requested that the President issue an annual proclamation designating February as "American Heart Month."

NOW, THEREFORE, I, GEORGE W. BUSH, President of the United States of America, do hereby proclaim February 2007 as American Heart Month, and I invite all Americans to participate in National Wear Red Day on February 2, 2007. I also invite the Governors of the States, the Commonwealth of Puerto Rico, officials of other areas subject to the jurisdiction of the United States, and the American people to join me in recognizing and reaffirming our commitment to fighting cardiovascular disease.

IN WITNESS WHEREOF, I have hereunto set my hand this first day of February, in the year of our Lord two thousand seven, and of the Independence of the United States of America the two hundred and thirty-first.