For Immediate Release
Office of the First Lady
January 22, 2007

Mrs. Bush's Remarks at the President's Committee on the Arts and the Humanities Coming Up Taller Awards Ceremony
The East Room

MRS. BUSH: I wanted to recognize, I think, Senator Burr is here, Senator Stevens is here. Thank you all for joining us. Congressman Jefferson. Each of these elected representatives, the two senators and the congressman are here because one of their home towns or someone in their home state is a winner of the "Coming Up Taller" awards, and so thank you all very much for joining us this morning.

I also want to welcome Gilberto Palmerin -- sorry, my pronunciation -- the Executive Director of the U.S.-Mexico Foundation for Culture. Welcome, and we're really happy you're here.

Adair Margo is the Chairman of the President's Committee on Arts and Humanities -- also, a really good friend of mine, and it's always great to have a Adair here. Thank you, Adair, for the great job you're doing.

The Director of the Institute of Museum and Library Services, Anne-Imelda Radice has joined us; Bruce Cole, from the National Endowment for the Humanities; Dana Gioia, the Chairman of the National Endowment of the Arts; Henry Moran*, the Chairman of the President's Committee on Arts and Humanities, and a few members of the President's Committee on Arts and Humanities. I want to thank each one of you for what you do all the time to promote arts and humanities in the United States, and especially for the "Coming Up Taller" awards, which are a great way to recognize the great community organizations around our country that teach children about the arts and humanities and give them a reason for success.

Thank you all, each one of you, for joining us today.

The groups that we honor today with the "Coming Up Taller" awards make extraordinary contributions to arts and culture in their communities. Orchestras and theater groups entertain. Museums and heritage programs educate. Art and dance studios delight and inspire. And every single "Coming Up Taller" program helps young people use their creativity and their talents so they can succeed.

Helping young people build the knowledge and the self-confidence they need to lead successful lives is at the heart of President Bush's Helping America's Youth Initiative. President Bush announced the Helping America's Youth Initiative at his 2005 State of the Union address, and he asked me to lead it. So over the last two years, I've been to schools and to after-school programs. I've visited fatherhood initiatives. I've met with mentors and Big Brothers and Big Sisters. I've visited gang-intervention programs, where I've met young people who are leaving gangs and finding jobs.

And I visited a few "Coming Up Taller" award programs, as well, that use the arts and humanities to help young people build successful lives. From Milwaukee to St. Louis, from Los Angeles to Omaha, what all of these programs have in common is a dedicated adult, eager to make differences in children's lives. 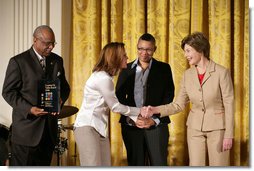 Dedicated adults are at work in Chicago, Illinois. There, the Snow City Arts Foundation gives children who are confined to hospitals passage to wherever their imaginations -- aided by a guitar, a pen, or a paintbrush -- will take them. In California, troubled teens in Fremont Juvenile Hall heal the wounds of their past through the Alameda Public Library's "Write to Read" program.

At the Starfish Academy in Charlotte, North Carolina, first- and second-graders at risk of falling behind in school improve their reading skills by studying art and music, and 90 percent of them advance to the next grade on time. In New York City, Columbia University's "Upward Bound" and "Talent Search" programs turn likely high school dropouts into proud college graduates.

Eighty-eight percent of the young people who participate in Birmingham Cultural Alliance Partnership improve their academic performance. B-CAP programs bring children closer to their parents, and help them discover their heritage, as they learn about African Americans' struggle for equality.

In Haines, Alaska, the native community keeps its heritage alive through the Tlingit Language and Culture program. Did I say it right? Tlingit. Is that right? Oh, I need the special click. (Laughter.) While weaving traditional spruce-root baskets, or memorizing the Tlingit "word of the week," young people learn the arts, language, and history of their elders, and they develop a sense of pride as stewards of their own culture.

Through Arkansas's "Art at the Heart" and "Intervention Hope" programs, children paint murals, perform plays, and master Ghanaian djembe drumming. They build character and communication skills, they improve their school attendance and academic performance, and they give the whole community reason for hope. In Newark, New Jersey, young people at the StudioWorks program receive hands-on training for careers in the arts. Every year, the brisk sales of StudioWorks' holiday cards cheer the aspiring artists who design them. 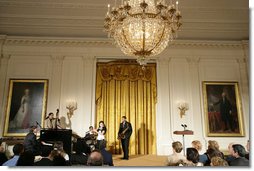 Through "Shakespeare in the Courts" in Lenox, Massachusetts, and the ShakesPEERS program here in Washington, D.C., teens hone their acting, public speaking, and critical-thinking skills. As they perform the works of The Bard, young people who struggled to make themselves heard suddenly find many people "lending their ears."

Teens find their own voices through Baltimore's Urban Debate League. There, underperforming students become eager researchers, articulate speakers, and disciplined competitors. Ninety percent of them go on to college. Look for these formidable policy debaters in the courtroom, and, someday, at the White House.

Future White House correspondents may be training at WNYC's Radio Rookies Program. Radio Rookies produce professional-level documentaries, raising awareness of the challenges that confront their generation and their communities. Teens who were once ignored now have an audience: 1.2 million people in the city of New York.

Audiences are captivated by UC-Berkeley's Young Musicians. These performers from low-income and minority communities trade low C's on their report cards for middle C's on the piano, and often earn straight A's as a result. One in five Berkeley Young Musicians has a 4.0 GPA, and 100 percent of them go to college. That's quite a record.

Audiences in the Crescent City rave about the Greater New Orleans Youth Orchestra. The young musicians' enthusiasm for mastering a classical repertoire often spills over into the classroom, and 99 percent of them pursue a college education. In the aftermath of the hurricanes, the Greater New Orleans Youth Orchestra offers children much-needed routine, structure, and creative expression, and gives them a chance to continue their city's rich musical traditions.

The benefits of "Coming Up Taller" programs don't just end with the students who participate. When dedicated adults give to these young people, these young people are inspired to give back. In Berkeley, a Young Musician named Kayla used to struggle in a low-performing high school. Today, she masters Beethoven piano sonatas while maintaining her high GPA at a demanding private school, and she still finds time to mentor Christobelle, a shy 11-year-old clarinetist. 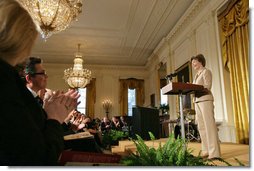 In New York, Radio Rookie Jaimita Haskell used her documentary to expose the unfair "tracking" system holding back many gifted students at the Staten Island High School. When the piece aired on WNYC, Jaimita's work emboldened students and parents in her school, throughout the city, and across the nation to speak out against unequal education policies. Jaimita's radio segment has earned her public service awards, and national recognition as an advocate for quality education.

Because of each of these great programs that you all represent today, young people are discovering humanities and the arts. They're developing the life skills and the discipline that lead to success. They're building the confidence to paint, dance, speak, and sing -- and in every one of their communities, to walk taller. So thank you to each and every one of you, and congratulations. (Applause.)

Now, I'm delighted to introduce a friend to the arts and to young people across our country: the Chair of the President's Committee on the Arts and Humanities, Adair Margo. (Applause.)

*Henry Moran is the Executive Director of the President’s Committee on the Arts and Humanities.