For Immediate Release
Office of the Vice President
January 16, 2007

Vice President's Remarks at the Naming Ceremony of the USS Gerald R. Ford
The Pentagon

THE VICE PRESIDENT: Thank you very much. And, Secretary Winter and Chairman Levin, Senator Warner, Chief Mullen, it's great to be here this afternoon to participate in a very special ceremony that has great meaning, obviously, for our late President's family, for the men and women of the Navy, and of course, for the nation. 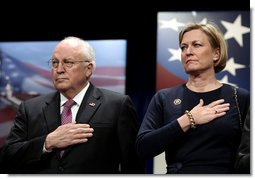 I've been looking forward to this gathering of friends and colleagues, and President Bush asked me to come this morning and extend his good wishes to everybody, as well.

If the purpose of naming an aircraft carrier is to convey the confident spirit of our military, and the good and just causes that America serves in the world, then we have certainly accomplished that purpose here today. The name Gerald R. Ford belonged to a man who gave a lifetime of devoted service to our country, reflecting honor on the United States Navy, on the House of Representatives, on the Vice Presidency, and on the Presidency. The naming of a carrier is a fitting tribute to the man, and it's thrilling for all of his family and friends.

Known before today only as CVN 78, the Gerald R. Ford already has years of planning behind it, and will join the fleet seven or eight years from now. The construction of these carriers represents a bipartisan commitment by the United States Congress to carefully prepare our military for challenges far into the future. One of the very practical lessons I learned at the Pentagon is that every President, every Secretary of Defense, and every military chief of staff deploys a force that is, in large part, the result of decisions made many years earlier by his predecessors. Because our own generation is taking that responsibility seriously, the Gerald R. Ford, and sister ships in the new class of nuclear-powered carriers, will help ensure the sea power of the United States for the next half century.

President Ford himself, with his background and the good common sense we all remember, was deeply committed to an active foreign policy, and to maintaining the strength of our military. Having fought for our country in the Second World War, he understood that events on distant shores can have a direct impact on our own security. He understood that protecting the American people requires defending our interests in far-away places. He understood that for our forces to be credible, they must be able to deploy wherever and whenever needed -- and this, in turn, requires the power to sail the oceans of the world, in control of the surface, the sub-surface, and the skies overhead. 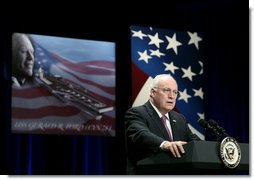 As Commander-in-Chief, Gerald R. Ford applied American influence with wisdom and foresight. He stood firmly by the men and women of the armed forces, and left office with the military in a higher state of readiness and morale than when he found it.

President Ford was rightly proud of his record on national security. And, like the team player he always was, he was quick to share the credit with the fine people who served alongside him -- from Henry Kissinger to Brent Scowcroft to Don Rumsfeld and Jack Marsh. It was my privilege, as well, to be on Jerry Ford's team, both during a difficult transition and through all the challenges of his time in office. All of us who were there count the experience as one of the truly great periods in our lives, when we worked for one of the most genuine, upright, and considerate men we have ever known.

Only three weeks after President Ford's passing, there is still a sense of loss for all of us, most especially for Betty and her children. This has been a time of reflection for everyone who had the honor of knowing President Ford and of serving with him. It's also been a time for re-connecting with old friends, reliving the things we shared, and looking back with gratitude on the good life of the man we were proud to call our leader. President Ford will always be an example to us of personal kindness, of loyalty, and of coolness under pressure. We remember how this longtime legislator proved to be a natural-born executive with a decisive, well ordered mind. He was comfortable with responsibility -- and because of his sturdy character and his Navy experience, Jerry Ford knew a thing or two about riding out a storm.

He didn't shrink from a tough call. In such a moment, even with a popular choice in plain view and the easy path laid straight out in front of him, President Ford asked only what was right for the United States of America, and acted accordingly. When criticism came, he kept his head about him, focused on his job, and persevered. History looks favorably on such a man, and President Ford's reputation has, indeed, grown even greater in the three decades since he left this city. 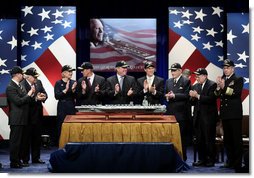 Today in our country, and at posts around the world, the flag of the United States remains at half-staff in memory of President Gerald Ford. But I think it would please him to know that today we're also looking to the future. He always reminded us that there's work to do; servicemen and women who need our support; and a call to duty in a world that benefits greatly from American power and American values. He would be proud, as well -- modestly so, but proud nonetheless -- of this coming addition to the Navy he joined 65 years ago, led as Commander-in-Chief, and respected all the days of his life.

When completed, the USS Gerald R. Ford will be a sight to behold: 100,000 tons of American ingenuity and power; rising 20 stories above water level; about as long as the Empire State Building; and able to sail the oceans for 20 years without refueling. We look forward to the day she joins the fleet and begins her long and steady service to the United States of America. (Applause.)