For Immediate Release
Office of the First Lady
January 11, 2007

Mrs. Bush's Remarks at a Ribbon Cutting of the Restored Treasury Building
U.S. Department of the Treasury
Washington, D.C.

MRS. BUSH: Thank you very much, Mr. Secretary. Thank you very much for that kind introduction and for the very interesting history you told us just a few tantalizing parts of. I also want to recognize Wendy Paulson, and of course Deputy Treasury Secretary Robert Kimmitt and Holly. Richard Cote, curator, just gave us a great tour. Thank you very much, Richard. And Polly, congratulations to you -- Polly Dietz, the project director on this ribbon cutting that we're here today to celebrate. 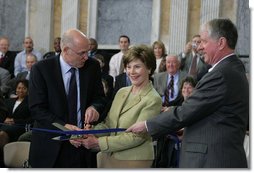 I want to thank each and every one of you also for your warm welcome to the Treasury Department. From the stories that Secretary Paulson just told us, we know that the work of the Treasury takes place in one of our country's most historical buildings. Treasury is the nation's first modern office complex, and it serves as a living example of 19th century design. American social history was made here when Secretary Salmon Chase, whose office I just visited, introduced women into the federal workforce, hiring them to fill positions vacated by men who had left to fight in the Civil War.

The history of the Treasury building is the history of our country. This history is vital to the civic and the patriotic life of our nation, and it's too important to lose to the decay of time. Across our country, many of America's most famous structures, like Treasury, have begun to show their age. If we want to preserve America's unique heritage, we must preserve the places where American history was made. Preservation of our culture and past is an issue President Bush and I care deeply about, and we're fortunate to live and work next door in one of America's most iconic buildings.

The challenge -- which is the challenge you've faced here -- is to preserve this centuries-old home while establishing a 21st century White House. One renovation that we're going through right now at the White House is the Brady Press Briefing Room. Built by President Nixon, over President Franklin Roosevelt's swimming pool, the Brady room is both an important part of the White House history and a functioning work space for journalists. Right now, renovators are repairing leaky pipes and replacing worn carpets while also installing state-of-the-art communications technology that's required by a modern-day White House press corps.

Most White House employees work in the historic Eisenhower Executive Office Building on the other side of the White House, which was originally designed by the supervising architect of the Treasury Alfred Mullett to house the departments of Navy, War and State.

A comprehensive restoration of the EEOB began in 2001, and renovators have already uncovered architectural treasures. In the Secretary of War's suite, preservationists carefully removed layers of paint and found frescoes, glass ornamentation, and original fabric dating back to the building's construction, which took place between 1871 and 1888. Work is now under way to restore and protect these historic architectural details. 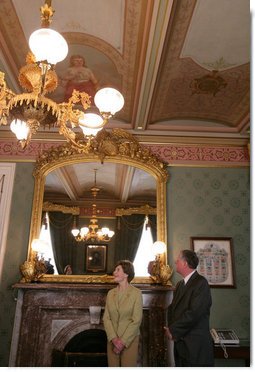 Over the last three years, we've honored historical organizations, history teachers, and 427 communities for their commitment to preservation. Sixty-eight communities and institutions have received Preserve America matching grants. And these grants, along with Save America's Treasures grants, encourage private institutions and citizens to join in our country's preservation efforts. And I know in this room are some of the private citizens who have been involved in the historic preservation of this building, and I want to thank each and every one of you.

The renovated Treasury is a terrific example of how government and the private sector can work together on historic preservation. Financed through federal appropriations and private contributions, the Treasury restoration project has completely modernized this 165-year-old compound. Preservationists have carefully collected and documented Treasury artifacts from the 19th and 20th century. They painstakingly restored some of Treasury's most distinctive architectural features, many of which had not been seen since the 1870s. These upgrades have improved the working environment for Treasury employees, and for visitors. The building is now accessible to people with disabilities, and new electrical, security, fire safety and telecommunications systems have been installed.

The press corps will have a special appreciation for one major upgrade. One of Treasury's elevators dates back to 1898. And years ago, after an important press conference, this elevator stalled between floors. The Secretary was interrupted in his work by the shouts of trapped reporters, and history was made when the Dow Jones correspondent filed 30 minutes earlier than his AP counterpart. The Dow Jones writer had the foresight to the take the stairs. (Laughter.)

I'm sure all of the reporters here today are happy to learn that seven Treasury elevators have now been upgraded or replaced.

The Treasury renovation took 10 years and cost $247 million and involved more than 1,100 workers. Word has it that these dedicated builders and preservationists received extra motivation from a rumor that lost gold bullion had been buried somewhere in the building. (Laughter.) The renovators turned up no stash of gold, but their hours of hard work did lead to other treasures. Before the renovation, elevator machinery obscured the skylights and the ornate gilt moldings of the West Dome. Today, this space has been restored to its original beauty.

In the Chase Suite, preservationists discovered exquisite frescoes buried beneath 11 layers of paint. Today, visitors to the deputy counsel's office can see the allegorical figures of Treasury and Justice that Secretary Chase, who later served as Chief Justice of the Supreme Court, had painted on the ceiling to reflect his background in finance and law.

Thanks to the dedication of everyone who contributed to this renovation, and to everyone who worked here through it, Treasury employees now enjoy a safer, brighter and more beautiful work place. All Americans benefit from having this national historic landmark preserved for future generations.

President Bush and I thank each one of you for representing our government's commitment to historic preservation, and we wish you many happy, productive days here in a renewed Treasury Department.

Thank you all very much, and congratulations.