For Immediate Release
Office of the Press Secretary
January 11, 2007

THE PRESIDENT: Welcome to the White House.

The Medal of Honor is the highest award for valor a President can bestow. The Medal is given for gallantry in the face of an enemy attack that is above and beyond the call of duty. The Medal is part of a cherished American tradition that began in this house with the signature of President Abraham Lincoln.

Since World War II, more than half of those who have been awarded the Medal of Honor have lost their lives in the action that earned it. Corporal Jason Dunham belongs to this select group. On a dusty road in western Iraq, Corporal Dunham gave his own life so that the men under his command might live. This morning it's my privilege to recognize Corporal Dunham's devotion to the Corps and country -- and to present his family with the Medal of Honor. 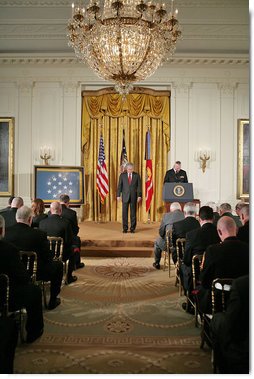 I appreciate the Medal of Honor recipients who have joined us: Barney Barnum, Bob Foley, Bob Howard, Gary Littrell, Al Rascon, Brian Thacker. Thanks for joining us.

I appreciate the Dunhams who have joined us, and will soon join me on this platform to receive the honor on behalf of their son: Dan and Deb Dunham; Justin Dunham and Kyle Dunham, brothers; Katie Dunham, sister; and a lot of other family members who have joined us today.

I appreciate the Chaplain for the Navy -- excuse me, for the Marine Corps. I didn't mean to insult you.

I thank Major Trent Gibson -- he was Jason Dunham's commander -- company commander; First Lieutenant Brian Robinson, who was his platoon commander. I welcome all the Marines from "Kilo-3-7" -- thanks for coming, and thanks for serving.

Long before he earned our nation's highest Medal Jason Dunham made himself -- made a name for himself among his friends and neighbors. He was born in a small town in upstate New York. He was a normal kind of fellow, he loved sports. He went to Scio Central School, and he starred on the Tiger basketball, soccer, and baseball teams. And by the way, he still holds the record for the highest batting average in a single season at .414. He was popular with his teammates, and that could be a problem for his mom. You see, she never quite knew how many people would be showing up for dinner, whether it be her family, or the entire basketball team. 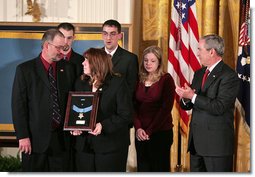 He grew up with the riches far more important than money: He had a dad who loved to take his boys on a ride with him when he made his rounds on the dairy farm where he worked. His mom was a school teacher. She figured out the best way to improve her son's spelling was to combine his love for sports with her ability to educate. And so she taught him the words from his reading list when they played the basketball game of "horse." He had two brothers and a sister who adored him.

He had a natural gift for leadership, and a compassion that led him to take others under his wing. The Marine Corps took the best of this young man, and made it better. As a Marine, he was taught that honor, courage and commitment are not just words. They're core values for a way of life that elevates service above self. As a Marine, Jason was taught that leaders put the needs of their men before their own. He was taught that while America's founding truths are self-evident, they also need to be defended by good men and women willing to stand up to determined enemies.

As a leader of a rifle squad in Iraq, Corporal Dunham lived by the values he had been taught. He was a guy everybody looked up to. He was a Marine's Marine who led by example. He was the kind of person who would stop patrols to play street soccer with the Iraqi schoolchildren. He was the guy who signed on for an extra two months in Iraq so he could stay with his squad. As he explained it, he wanted to "make sure that everyone makes it home alive." Corporal Dunham took that promise seriously and would give his own life to make it good.

In April 2004, during an attack near Iraq's Syrian border, Corporal Dunham was assaulted by an insurgent who jumped out of a vehicle that was about to be searched. As Corporal Dunham wrestled the man to the ground, the insurgent rolled out a grenade he had been hiding. Corporal Dunham did not hesitate. He jumped on the grenade, using his helmet and body to absorb the blast. Although he survived the initial explosion, he did not survive his wounds. But by his selflessness, Corporal Dunham saved the lives of two of his men, and showed the world what it means to be a Marine.

Deb Dunham calls the Marine Corps her son's second family and she means that literally. Deb describes her son's relationship to his men this way: "Jay was part guardian angel, part big brother, and all Marine." She remembers her son calling from the barracks, and then passing the phone to one of his Marines, saying, "I've got a guy here who just needs to talk to a mom." Now it's the Marines who comfort her. On special days, like Christmas or Mother's Day or her birthday, Deb has learned the day will not pass without one of Jason's fellow Marines calling to check on her.

With this Medal we pay tribute to the courage and leadership of a man who represents the best of young Americans. With this Medal we ask the God who commands us to love our neighbor as ourselves to wrap his arms around the family of Corporal Jason Dunham, a Marine who is not here today because he lived that commandment to the fullest.

I now invite the Dunhams to join me on the stage. And, Colonel, please read the citation.

(The citation is read. The Medal is presented.) (Applause.)