For Immediate Release
Office of the Vice President
January 10, 2007

THE VICE PRESIDENT: Well, thank you very much, Senator. And thank you, Lieutenant Governor Bolling; Attorney General McDonnell; members of the Senate and House of Delegates, Chief Adkins, distinguished guests, ladies and gentlemen: 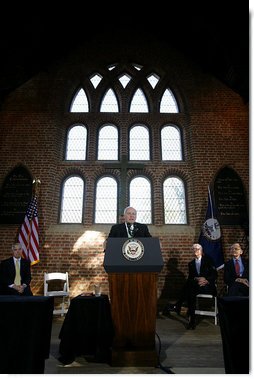 It's a special privilege to be with all of you today, as this great legislative body begins the new session, and gathers in a place that Virginians knew as their capital for close to one hundred years.

I want to thank Delegate Melanie Rapp for her efforts to organize this historic session -- a tremendous idea, Melanie. And I also want to thank Senator John Chichester for being here today, and Speaker Bill Howell -- and Senator Tommy Norment for extending the invitation. I deeply appreciate it.

I've enjoyed visiting Historic Jamestown and Jamestown Settlement in the past, along with my wife and our children and grandchildren. We were here just last April, I believe. It's an experience that we heartily recommend to others, and that our family looks forward to repeating. Today I count it a special honor to stand with members of the General Assembly as we begin a year of significance and commemoration -- to the commonwealth, and for our country.

It's striking to realize how much of America's story begins with a little three-sided fort, raised on the banks of the James River, four centuries ago. In this place, grand events were set in motion. In this place, great and noble traditions were introduced to the North American continent. So it is fitting that we should know and appreciate all that happened here, the names of those who lived here, and the history, both good and ill, that unfolded here.

Four hundred years ago today, more than a hundred colonists were a few weeks into their journey across the Atlantic. Along with the crewmen and all the provisions they could carry, they were packed in close quarters aboard these three small ships -- the Susan Constant, the Godspeed, and the Discovery. These are the ships that landed near this spot. Most of us have seen the replicas, and I doubt any of us would want to spend a day in those conditions, much less the months it would take to make that crossing. But they made it -- and because they did, the world would never be the same after the 14th of May, 1607.

The history of our country did not begin on Cape Cod in 1620. (Applause.) That's a great line. (Laughter.) A year before that -- on July 30th, 1619, just a few steps from this sanctuary -- the first representative assembly in the new world was called to order. Indeed, so much of what defines our country -- its language, legal traditions, and institutions -- have roots in the community that rose in this corner of Virginia. English liberty and law, private property, the spirit of free enterprise, and commerce -- all of these are part of the Jamestown legacy.

That legacy also involves struggle and injustice. Of that first group of settlers, the majority would be dead within just a few years. Those who arrived later shared in the hardship and the hunger, and joined in the unending labor of working the land, building communities, and slowly extending civilization into the wilderness. And the story that began at Jamestown covers more than just settlers from England. There were people who had crossed the Atlantic on a very different kind of voyage, held beneath ships' decks -- and then kept in bondage, their life's labor stolen from them. And there were the native peoples, who were here first, and who would suffer great loss -- the passing of familiar things and the ending of a way of life. Here, it's been noted, we find the beginnings of the cultural diversity that continues to shape our nation's character.

The author James Horn put it well: "At Jamestown, the peoples of America, Europe, and Africa first encountered one another, lived and worked alongside each other, traded and fought one another, survived and persisted."

Since those early years, the people of this land have followed an ever-rising path of liberty and opportunity, justice and equality. On that journey, we have confronted many injustices, and widened the circle of liberty, and become known to all the world as freedom's home and defender.

Jamestown began as a commercial enterprise, but within a generation, Virginia was a colony of the crown. In time, the colonies would be 13 in number, and together they would become the United States of America. Only 20 miles from here was the siege at Yorktown, where Americans won the final battle in the Revolution. The words of the Declaration of Independence came from the pen of Thomas Jefferson -- Virginian by birth, founder of its university, member of the legislature, Governor of the Commonwealth, first Secretary of State, second Vice President, and third President of the United States. James Madison of Virginia was Father of the Constitution; and, of course, George Washington of Virginia, the Father of our Country. In addition to these, five other Virginia natives have held our nation's highest office, from Monroe to Wilson. This commonwealth, and the people who call it home, stand at the very center of American history.

Americans are a people that remember our forebears, and commemorate the signal events of the past. And so there are some places and objects to which we give special care, and guard from the passing of time. Here in Virginia, you've taken seriously the duties of historical stewardship, and nowhere is that more evident than at Jamestown Settlement and Historic Jamestown. The preservation and the archaeological work in this place are, in a word, superb. The discovery in the 1990s of the original fort, long believed to have been washed into the river, was one of the great archaeological events of our time. And like so much that has taken place here, that discovery is a credit to the patience, sensitivity, and professionalism exhibited here each and every day.

That commitment to good stewardship was shown once more when the congressional delegation of Virginia, along with those of Maryland, Pennsylvania and Delaware, worked to establish a national historic trail bearing the name of one of the original Jamestown settlers, Captain John Smith. President Bush was pleased to sign the legislation authorizing the John Smith Chesapeake National Historic Trail. This is America's first all-water National Historic Trail -- and appropriately it begins right here in Jamestown.

To visit this extraordinary part of Virginia is to gain a deep understanding of the challenges that came along at a pivotal point in our history, and to look with respect on the people who faced those challenges. Only three years after Susan Constant, Godspeed, and Discovery reached this shore, one of the brave souls living here wrote the following words under the title, "News from Virginia." And I quote:

Be not dismayed at all

For that our work is good

We hope to plant a nation

Where none before hath stood.

Even across the centuries, it is admirable and inspiring that such hopeful words could be written in the year 1610, amid difficulties that our generation can scarcely imagine. And it's a reminder that however important deeds may be, the things of the spirit come first. All the accomplishments of that distant generation were possible only because of human qualities that all of us respect -- qualities that all of us would want to be remembered for ourselves: courage, perseverance, loyalty, and trust in Almighty God. Because of those virtues, a young colony was kept alive. And standing here in the year 2007, we can draw a straight line from those early days of struggle and fortitude in a tiny settlement, to the great nation we know and love today.

For that reason, this will be a special year of commemoration and reflection -- from America's Anniversary Weekend in May, to the World Forum on Democracy in September. And it will be a particular honor when Queen Elizabeth herself returns to Jamestown, 50 years after she came here on her first visit to America as the British sovereign.

Another great honor comes by virtue of legislation signed by the President. The United States marks this anniversary year with the rarest of tributes -- commemorative coins struck by the U.S. Mint. By this extraordinary act of Congress, the nation pays lasting homage to the 400th anniversary of the first English settlement on the North American shore. And we proudly acknowledge Virginia's irreplaceable role in creating the greatest nation on Earth, the United States of America. So today it's my privilege to present the first of the Jamestown Commemorative coins to Speaker Howell and Senator Chichester. The rest of you have to buy your own. So do I. (Laughter.) They go on sale here tomorrow. (Laughter.)

So, Mr. Speaker, Senator, I ask you to step forward and accept these coins, which I present to you along with the respect of the American people, and the good wishes of the President of the United States. Thank you very much. (Applause.)