For Immediate Release
Office of the Press Secretary
January 2, 2007

THE PRESIDENT: Mrs. Ford, the Ford family; distinguished guests, including our Presidents and First Ladies; and our fellow citizens:

We are here today to say goodbye to a great man. Gerald Ford was born and reared in the American heartland. He belonged to a generation that measured men by their honesty and their courage. He grew to manhood under the roof of a loving mother and father -- and when times were tough, he took part-time jobs to help them out. In President Ford, the world saw the best of America -- and America found a man whose character and leadership would bring calm and healing to one of the most divisive moments in our nation's history. 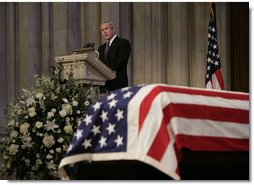 Long before he was known in Washington, Gerald Ford showed his character and his leadership. As a star football player for the University of Michigan, he came face to face with racial prejudice when Georgia Tech came to Ann Arbor for a football game. One of Michigan's best players was an African American student named Willis Ward. Georgia Tech said they would not take the field if a black man were allowed to play. Gerald Ford was furious at Georgia Tech for making the demand, and for the University of Michigan for caving in. He agreed to play only after Willis Ward personally asked him to. The stand Gerald Ford took that day was never forgotten by his friend. And Gerald Ford never forgot that day either -- and three decades later, he proudly supported the Civil Rights Act and the Voting Rights Act in the United States Congress.

Gerald Ford showed his character in the devotion to his family. On the day he became President, he told the nation, "I am indebted to no man, and only to one woman -- to my dear wife." By then Betty Ford had a pretty good idea of what marriage to Gerald Ford involved. After all, their wedding had taken place less than three weeks before his first election to the United States Congress, and his idea of a "honeymoon" was driving to Ann Arbor with his bride so they could attend a brunch before the Michigan-Northwestern game the next day. (Laughter.) And that was the beginning of a great marriage. The Fords would have four fine children. And Steve, Jack, Mike, and Susan know that, as proud as their Dad was of being President, Gerald Ford was even prouder of the other titles he held: father, and grandfather, and great-grandfather.

Gerald Ford showed his character in the uniform of our country. When Pearl Harbor was attacked in December 1941, Gerald Ford was an attorney fresh out of Yale Law School, but when his nation called he did not hesitate. In early 1942 he volunteered for the Navy and, after receiving his commission, worked hard to get assigned to a ship headed into combat. Eventually his wish was granted, and Lieutenant Ford was assigned to the aircraft carrier, USS Monterey, which saw action in some of the biggest battles of the Pacific. 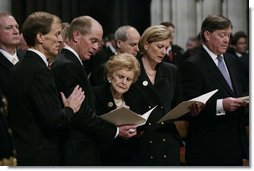 Gerald Ford showed his character in public office. As a young congressman, he earned a reputation for an ability to get along with others without compromising his principles. He was greatly admired by his colleagues and they trusted him a lot. And so when President Nixon needed to replace a vice president who had resigned in scandal, he naturally turned to a man whose name was a synonym for integrity: Gerald R. Ford. And eight months later, when he was elevated to the presidency, it was because America needed him, not because he needed the office.

President Ford assumed office at a terrible time in our nation's history. At home, America was divided by political turmoil and wracked by inflation. In Southeast Asia, Saigon fell just nine months into his presidency. Amid all the turmoil, Gerald Ford was a rock of stability. And when he put his hand on his family Bible to take the presidential oath of office, he brought grace to a moment of great doubt.

In a short time, the gentleman from Grand Rapids proved that behind the affability was firm resolve. When a U.S. ship called the Mayaguez was seized by Cambodia, President Ford made the tough decision to send in the Marines -- and all the crew members were rescued. He was criticized for signing the Helsinki Accords, yet history has shown that document helped bring down the Soviet Union, as courageous men and women behind the Iron Curtain used it to demand their God-given liberties. Twice assassins attempted to take the life of this good and decent man, yet he refused to curtail his public appearances. And when he thought that the nation needed to put Watergate behind us, he made the tough and decent decision to pardon President Nixon, even though that decision probably cost him the presidential election.

Gerald Ford assumed the presidency when the nation needed a leader of character and humility -- and we found it in the man from Grand Rapids. President Ford's time in office was brief, but history will long remember the courage and common sense that helped restore trust in the workings of our democracy.

Laura and I had the honor of hosting the Ford family for Gerald Ford's 90th birthday. It's one of the highlights of our time in the White House. I will always cherish the memory of the last time I saw him, this past year in California. He was still smiling, still counting himself lucky to have Betty at his side, and still displaying the optimism and generosity that made him one of America's most beloved leaders.

And so, on behalf of a grateful nation, we bid farewell to our 38th President. We thank the Almighty for Gerald Ford's life, and we ask for God's blessings on Gerald Ford and his family.