For Immediate Release
Office of the Press Secretary
December 28, 2006

THE PRESIDENT: I just had a meeting with my national security team; this is the first time we've had a chance to sit down with Secretary Gates since he came back from Iraq. General Pace went with the Secretary; they reported firsthand what they saw and what they found. It's an important part of coming to closure on a way forward in Iraq that will help us achieve our objective, which is a country that can govern itself, sustain itself and defend itself. And Mr. Secretary, thank you for your timely trip and thank you for this important briefing. 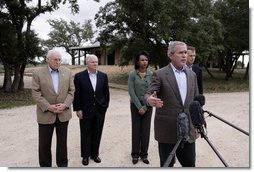 I've got more consultation to do until I talk to the country about the plan. Obviously, we'll continue to work with the Iraqi government. The key to success in Iraq is to have a government that's willing to deal with the elements there that are trying to prevent this young democracy from succeeding.

We want to help them succeed. And so we'll continue to consult with the Iraqis. I'm going to talk to Congress -- not only will I continue to reach out to Congress, but members of my team will do so, as well. I fully understand it's important to have both Republicans and Democrats understanding the importance of this mission. It's important for the American people to understand success in Iraq is vital for our own security. If we were to not succeed in Iraq, the enemy -- the extremists, the radicals -- would have safe haven from which to launch further attacks, they would be emboldened; they would be in a position to threaten the United States of America. This is an important part of the war on terror.

People always ask me about a New Year's resolution -- my resolution is, is that they'll be safe and that we'll come closer to our objective, that we'll be able to help this young democracy survive and thrive and, therefore, we'll be writing a chapter of peace. I can't thank our families enough for supporting their loved one who wears the uniform, and I can't thank those who -- soldiers and sailors and airmen and Coast Guard men and woman, folks in the Air Force -- who represent the United States of America. May God continue to bless them.