For Immediate Release
Office of the Press Secretary
December 27, 2006

Announcing the Death of Gerald R. Ford
A Proclamation by the President of the United States of America 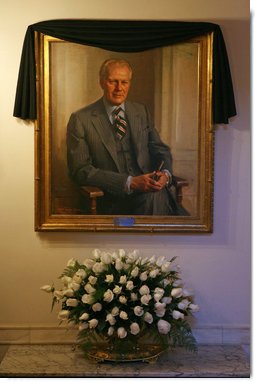 TO THE PEOPLE OF THE UNITED STATES:

It is my sad duty to announce officially the death of Gerald R. Ford, the thirty-eighth President of the United States, on December 26, 2006.

President Ford was a great man who devoted the best years of his life to serving the United States of America. He was also a true gentleman who reflected the best in America's character. Before the world knew his name, he served with distinction in the United States Navy and the United States House of Representatives. As a congressman from Michigan, and then as Vice President, he commanded the respect and earned the goodwill of all who had the privilege of knowing him. On August 9, 1974, he stepped into the presidency without having ever sought the office.

During his time in office, the American people came to know President Ford as a man of complete integrity, who led our country with common sense and kind instincts. Americans will always admire Gerald Ford's unflinching performance of duty, the honorable conduct of his Administration, and the great rectitude of the man himself. We mourn the loss of such a leader, and our thirty-eighth President will always have a special place in our Nation's memory.

President Ford lived 93 years, and his life was a blessing to America. Now this fine man will be taken to his rest by a family that will love him always and by a Nation that will be grateful to him forever.

I hereby order that suitable honors be rendered by units of the Armed Forces under orders of the Secretary of Defense.

In a further expression of our national grief, I will appoint in a subsequent proclamation a National Day of Mourning throughout the United States when the American people may assemble in their respective places of worship, there to pay homage to the memory of President Ford.

IN WITNESS WHEREOF, I have hereunto set my hand this twenty seventh day of December, in the year of our Lord two thousand six, and of the Independence of the United States of America the two hundred and thirty-first.