For Immediate Release
Office of the Press Secretary
December 20, 2006

President's Statement on Tax Relief and Health Care Act of 2006

THE PRESIDENT: Thanks for coming. Welcome to the White House. In a few moments I'm going to sign a bill that will extend tax relief to millions of American families and small businesses and add momentum to a growing economy. The Tax Relief and Health Care Act of 2006 will maintain key tax reforms, expand our commitment to renewable energy resources, make it easier for Americans to afford health insurance and open markets overseas for our farmers and small business owners. 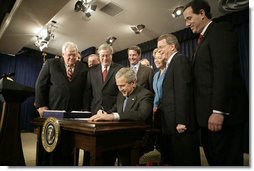 This is a good piece of pro-growth legislation, and I'm looking forward to signing it into law. And I appreciate members of my Cabinet who have joined me in thanking the Congress for their good work here at the end of this session. I want to thank Secretary of the Treasury, Hank Paulson, Secretary of the Interior, Dirk Kempthorne, and Ambassador Sue Schwab for joining us today. Thanks for your service. (Applause.)

I appreciate the Speaker for being here. Mr. Speaker, good piece of work. I thank you for your hard work at the end of the session. You deserve a lot of credit for this fine piece of legislation, as does Senator Bill Frist, Senate Majority Leader. (Applause.)

I appreciate key members of the Senate and the House, who got this piece of legislation passed, for joining us today. I want to thank Pete Domenici and Mike DeWine and Rick Santorum for the Senate -- I'm going to save the Louisianans here for a minute -- and I want to thank the Chairman, Bill Thomas, for not only this bill, but a lot of other good pieces of legislation we were able to work together on.

I want to say something about these Louisianans. I appreciate them coming. This is a really important piece of legislation for Louisiana for a lot of reasons, not the least of which is it will help provide money so that we can help restore the wetlands in Louisiana.

It's an issue that has united the people of Louisiana. People are rightly concerned about the evaporation of wetlands, and this bill is going to help deal with that important issue. And I want to thank Mary and David Vitter for good work on this important bill. Congratulations. (Applause.)

Texas people kind of like Louisianans. (Laughter.) A lot of us spent some of our youth in Louisiana. (Laughter.)

As we approach the end of 2006, our economy is strong, it's productive and it's prosperous. The most recent jobs report shows that our economy created 132,000 new jobs in November. That's good. We have added more than 7 million new jobs since August of 2003 -- more than Japan and the European Union combined.

The unemployment rate has remained low at 4.5 percent. More Americans are finding work, and more American workers are taking home bigger paychecks. The latest figures show that real hourly wages increased 2.3 percent in the last year. For the typical family of four with both parents working, that means an extra $1,350 for this year.

As we look forward, our goal is to maintain pro-growth economic policies that strengthen our economy and help raise the standard of living for all our citizens. The bill I sign today will continue important progress in four key ways. First, the bill will extend key tax relief measures that are critical to expanding opportunity, continuing economic growth, and revitalizing our communities.

To keep America competitive in the world economy, we must make sure our people have the skills they need for the jobs of the 21st century. Many of those jobs are going to require college, so we're extending the deductibility of tuition and higher education expenses to help more Americans go to college so we can compete.

And to keep our nation leading the world in technology and innovation, we're extending and modernizing the research and development tax credit. By allowing businesses to deduct part of their R&D investments from their taxes, this bill will continue to encourage American companies to pursue innovative products, medicines, and technologies.

The bill will also extend vital provisions of the Gulf Opportunity Zone Act that I signed last year. The bill will keep in place key tax credits that we passed to help rebuild Gulf Coast communities that were devastated by the hurricanes that hit the region in 2005. It will allow us to maintain our commitment to provide a 50 percent bonus depreciation for GO Zone properties in the hardest hit areas. It will encourage businesses to build new structures and purchase new equipment in Mississippi and Louisiana.

Secondly, this bill will help expand and diversify energy supplies. The bill will increase America's energy security by reducing dependence on foreign sources of energy. And that's a key goal of the Advanced Energy Initiative that my administration has laid out. To encourage the development of new sources of energy, the bill will extend tax credits for investment in renewable electricity resources, including wind, solar, biomass and geothermal energy. It will encourage the development of clean coal technology and renewable fuels like ethanol. And it will help promote new energy efficient technologies that will allow us to do more with less. In other words, it encourages conservation.

Meeting the needs of our growing economy also requires expanding our domestic production of oil and natural gas. If we want to become less dependent on foreign sources of oil and gas, it is best we find some here at home. This bill will allow access to key portions of America's outer continental shelf so we can reach more than 1 billion additional barrels of oil and nearly 6 trillion cubic feet of natural gas.

By developing these domestic resources in a way that protects our environment, we will help address high energy prices, we'll protect American jobs, and we'll reduce our dependence on foreign oil.

The bill will help open new markets for American goods and services around the world. I believe in free and fair trade. I believe free and fair trade is in the interests of the working people of this country. The bill authorizes permanent normal trade relations with Vietnam. And, Mr. Ambassador, thanks for joining us.

Vietnam will join the World Trade Organization in January. Isn't that amazing? I think it is. You'd be amazed at what it's like to be in Vietnam; Laura and I just returned. You were there, Mr. Ambassador. You saw the outpouring of affection for the American people. There's amazing changes taking place in your country as your economy has opened up. Vietnam is demonstrating a strong commitment to economy reform. And I believe that's going to encourage political reform and greater respect for human rights and human dignity.

With this bill, America will broaden our trade relations with Vietnam. It's going to help the Vietnamese people build a strong economy that's going to raise their standards of living. It's in our interest to help those who struggle. It's in the interest of the United States to promote prosperity around the world, and the best way to do so is through opening up markets and free and fair trade.

The bill is going to extend a series of programs with other developing nations to give duty-free status to products they export to the United States. By encouraging exports, we're going to help nations in sub-Sahara Africa, the Caribbean and Latin America develop their economies and ultimately create new markets for U.S. goods and services.

Trade is an engine of economic growth, and I'm looking forward to continuing to work with the new Congress to open up markets for U.S. farmers and manufacturers and service providers, and provide new opportunities for people around the world and help eliminate poverty.

Fourth, the bill will help make health care affordable and accessible for more Americans. This bill strengthens health savings accounts, which we created in 2003. These accounts allow people to save money for health care tax free, and to take their health savings accounts with them if they move from job to job. So far, an estimated 3.6 million HSAs have been opened in America.

To encourage even more people to sign up for HSAs, the bill will raise contribution limits and make accounts more flexible. It will let people fund their HSAs with one-time transfers from their IRA accounts. It will allow them to contribute up to an annual limit of $2,850, regardless of the deductible for their insurance plan.

We'll give them the option to fully fund their HSAs regardless of what time of year they sign up for the plan. These changes will bring health savings accounts within the reach of more of our citizens, and ensure that more Americans can get the quality care they deserve.

With all these steps, we're working to improve the health and prosperity of the American people and to keep our economy growing. We're going to continue to support wise policies that encourage and enhance the entrepreneurial spirit in America so this country of ours can remain the economic leader in the world.

I want to thank the members of Congress for joining us. I appreciate the members of my Cabinet. It's now my honor to sign the Tax Relief and Health Care Act of 2006. (Applause.)