For Immediate Release
Office of the First Lady
December 14, 2006

The White House Summit on Malaria

MRS. BUSH: Thank you very, very much. Thank you so much, Dr. Rice, thank you for your great work as Secretary of State. I want to recognize a few people in the audience, Mrs. Chantal de Souza Yayi is here. She's the wife of the President of Benin. She's joining us today. Ambassador Randall Tobias, who is the Director of Foreign Assistance and Administrator for USAID, who has been very active in both this and earlier in his government career as the AIDS administrator with the HIV/AIDS. Admiral Timothy Ziemer. Admiral Ziemer is the one who is the U.S. Global Malaria Coordinator. He's been absolutely instrumental in the development of this summit, and in all the work the President's Malaria Initiative has done so far. Thank you, Admiral Ziemer. Ray Chambers, who is the Chairman of Malaria No More. Ray is an example to all of us of someone who because of fortune in his life, a fortunate life, he has reached out around the world to help other people. And thank you so much, Ray, for being so involved in this. 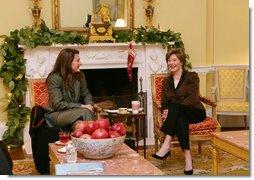 The members of Congress who are here, thank you all for coming. The members of the diplomatic corps. I want to thank our host at National Geographic, John Fahey and Gilbert Grosvenor. Thank you all very, very much for letting us meet here today.

Educators, business leaders, philanthropists, researchers, activists, and distinguished guests. Welcome to the White House Summit on Malaria. Today's gathering presents us with a historic opportunity to end the suffering of millions. Governments, the private sector, and concerned citizens have all united in one place, ready with unprecedented commitments that can turn the tide against malaria.

Adding to the urgency is the fact that malaria is treatable and preventable. The disease once sickened men, women, and children in many parts of the United States. But through advances in science and technology, we learned that the cause of such enormous suffering is a microscopic parasite, carried by an insect. We learned how to stop the spread of malaria -- and the disease was eliminated in the United States nearly 60 years ago.

The challenge now is to use this scientific progress, so that it benefits people still at risk. In June 2005, President Bush launched the President's Malaria Initiative: a five-year, $1.2 billion program to combat malaria in 15 of the hardest-hit African nations. This initiative calls on developed countries, private foundations, and volunteer organizations to join to reduce the suffering and death caused by malaria. 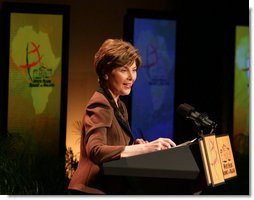 Private foundations and corporations have responded with millions of dollars for prevention and treatment. Civic groups and religious organizations have mobilized thousands of volunteers. Through early PMI partnerships with the first three focus countries, aid from the American people has reached about 6 million Africans. Next year, 30 million more will receive life-saving medicines, sprays, and nets as the program expands.

These partnerships save lives, and spread hope. Last year in the Tanzanian villages of Kambini and Kiwani, during the peak infection month of June, local health workers documented more than 450 cases of malaria. This June, one year into PMI, the number of cases plummeted to eight. In some PMI areas, malaria researchers have actually complained that they no longer have enough cases to sustain their studies. They're the only ones complaining. (Laughter and applause.)

For the Malaria Initiative to save even more lives, its resources must be used effectively and strategically. Today, I'm delighted to announce that PMI will launch the Malaria Communities Program: a $30 million initiative to advance grassroots malaria-control projects in Africa.

The Malaria Communities Program will provide grants to African and American NGOs, as well as civic and religious groups, to support their malaria-control work. It will encourage more charitable organizations to join the fight. The Communities Program complements the efforts of African governments by creating independent, sustainable malaria-control programs. In villages throughout Africa, these initiatives can protect children and their families long after PMI sunsets. Most important, the Malaria Communities Program will help citizens take charge of their own health.

Defeating this disease requires the cooperation of citizens in Africa. It also requires the support of citizens here, in the United States. Each and every one of us has the responsibility to stop the suffering caused by malaria -- because every life, in every land, matters. And all of us can do something to help, because one of the best protections against malaria is simple and inexpensive: a long-lasting, insecticide-treated bed net. Only a fraction of African homes have the bed nets they need. But any individual who can raise $10 can buy a net, and save a life.

Individuals throughout our country are saving lives across Africa -- thanks to Malaria No More, an enormous grassroots network that will work to provide bed nets for millions of Africans. Communities hold bake sales, raffles, silent auctions, and read-a-thons. Students sell t-shirts and run lemonade stands, and even dress up as mosquitoes to show off their efforts.

Concerned citizens can harness the potential of the internet to launch creative fundraising campaigns. One group, Madness Against Malaria, established an online "March Madness" fundraising tournament. Sixty-four teams from around the world compete to see who can accumulate the most online donations. The team that buys the most bed nets wins the Malaria Cup trophy -- and saves thousands of lives.

Defeating malaria also requires education. Life-saving nets, sprays, and medicines work best when people know how to use them. And throughout Africa, people must know how malaria is transmitted. So private citizens in Africa and the United States are building partnerships to improve education in malaria-prone areas.

In Rwanda, Episcopal Bishop John Rucyahana knows that malaria control and education are inseparable. His diocese provides villagers with malaria treatment and also teaches the proper use of sprays and nets. At the 62 schools the bishop oversees, children learn early on that malaria prevention must be a way of life.

The bishop's efforts are supported by churches from across the United States. From Chicago to Little Rock, from the East Coast to the West, caring individuals sponsor students, and supply bed nets and medicines. Hundreds of Americans have visited Rwanda as volunteers, educating communities about malaria treatment.

A vital part of this education, Bishop Rucyahana says, is teaching villagers how to read. "Illiteracy goes with poverty," the bishop explains, "and both perpetuate the disease." So at every one of the diocese's 360 churches, volunteers offer literacy instruction. Through their women's ministries, the churches make a special effort to reach mothers. They recognize that literate women can make wise decisions that will protect them, and their children, from malaria.

Education in the developed world is equally as important. Across America, the private sector is working to raise the public's awareness of malaria. Later this morning, you'll hear about one example: Nets Are Nice, a picture book that teaches children what they can do to help end this disease.

Nets Are Nice was developed by Malaria No More. With corporate and foundation support, the book will be distributed to nearly 6 million students throughout the United States this spring. Nets Are Nice is a terrific educational resource. And it's a great example of how the government, businesses, and private philanthropists can work together to educate children in the United States about malaria.

Individual citizens, too, are doing their part. At Lake Oswego High School in Oregon, a 16-year-old student, Emily Fuller, launched a project to raise money for bed nets, and to raise awareness in her community. She and her classmates set up tables outside the school cafeteria and draped them with nets, attracting curious students. Plans are underway to hold educational forums in the school auditorium, and to hold fundraising shoot-out contests during halftime at the school's basketball games.

The principal at Lake Oswego High, Bruce Plato, says teachers are planning to work malaria education into their political science and world history classes. "There's a lot of interest in this," the Principal says. "Malaria is something that's happening half a world away -- but this is something we can do to help."

Every one of us can do to something to help prevent the suffering caused by malaria. And the more people know about this disease, the more quickly we can defeat it.

Today, I'm delighted to announce that President Bush will designate April 25, 2007, as "Malaria Awareness Day." African countries and other nations commemorate April 25th to raise global awareness of malaria, and to reaffirm their commitment to ending this disease. The United States is proud to stand with them.

Ending the malaria epidemic is an ambitious goal -- but one we can, and must, achieve. By defeating malaria, the American people can help people in Africa enjoy greater prosperity and good health. Mothers here can help mothers in Africa watch their children grow healthy and strong. Children here can help children in Africa delight in the same pleasures they enjoy -- going to school, playing games, and making and keeping friends.

One of these hopeful children is Kanuri Kimiti, a teenager in Kenya, where malaria kills more than 30,000 children every year. For an essay contest at his school, Kanuri wrote: "If we want to develop a country such as Kenya We must all come together to help one another, so we may be able to make our world a malaria-free world."

During this holiday season, we urge the citizens of many nations to come together to give the greatest gift to those in need: life. May God bless each of you, and your work to make our world a malaria-free world.