For Immediate Release
Office of the Press Secretary
December 4, 2006

President Bush Meets with His Eminence Abdul-Aziz Al-Hakim, Leader of the Supreme Council for the Islamic Revolution in Iraq
The Oval Office

PRESIDENT BUSH: Your Eminence, welcome back to the Oval Office. This is the second opportunity I've had to meet with one of the distinguished leaders of a free Iraq. This is a man whose family suffered unbelievable violence at the hands of the dictator, Saddam Hussein. He lost nearly 60 family members, and yet rather than being bitter, he's involved with helping the new government succeed. 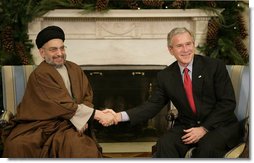 We talked about a lot of important issues. I appreciate so very much His Eminence's commitment to a unity government. I assured him the United States supports his work and the work of the Prime Minister to unify the country. Part of unifying Iraq is for the elected leaders and society leaders to reject the extremists that are trying to stop the advance of this young democracy. I appreciated very much His Eminence's strong position against the murder of innocent life.

We talked about the need to give the government of Iraq more capability, as quickly as possible, so that the elected government of Iraq can do that which the Iraqi people want, which is to secure their country from the extremists and murderers. I told His Eminence that I was proud of the courage of the Iraqi people. I told him that we're not satisfied with the pace of progress in Iraq, and that we want to continue to work with the sovereign government of Iraq to accomplish our mutual objectives, which is a free country that can govern itself, sustain itself, and defend itself; a free country which will serve as an ally in the war against the extremists and radicals and terrorists.

So, Your Eminence, welcome back. Thank you for the very constructive conversation we had.

SCIRI LEADER HAKIM: In the name of God, the merciful, the passionate, and blessing upon Prophet Mohammed and his purified family and his loyal companions. My meeting with President Bush today emerges from our shared commitment to continue dialogue and consultation among us and also on the basis of our conviction that the Iraqi issue is a mutual interest. It's an issue that requires coordination between the two sides in a way that concerns both of us politically and from a security point of view and economic point of view, as well.

Therefore, our conversation today focused on ways to advance the work of the Iraqi government, the elected government, as well as to advance the whole situation in Iraq and move it forward. Also, we have discussed ways in order to provide all the necessities that the Iraqi armed forces will need, in terms of armament, in terms of trainings, in order to be in a position to assume the security file.

The Iraqi situation has been subjected to a great deal of defamation, and the true picture is not being presented in order to show a dark side of what's happening in Iraq. We see the attempts to defame and distort the situation in Iraq not taking into consideration the democratic steps that that country has taken, writing the constitution and establishing a state that depends heavily on the constitution, that it is unified and that it is strong. There are attempts to show the sectarian strife in an attempt to weaken the position in Iraq.

Therefore, we believe that the Iraqi issue should be solved by the Iraqis with the help of friends everywhere. But we reject any attempts to have a regional or international role in solving the Iraqi issue. We cannot bypass the political process. Iraq should be in a position to solve Iraqi problems. We welcome any effort that could enhance the democratic reality in Iraq and protect the constitutional role of that state.

We will work very hard and seek all forms of cooperation at the international level and the regional level in order to defeat terrorism that it is trying to use Iraq as a base in order to sabotage the future of that nation.

Thank you very much, Mr. President, for allowing me this opportunity to meet with you. I would like to take this opportunity also to thank the American people and their sympathy toward Iraq, those who helped Iraq to get rid of a brutal dictatorship and to enjoy freedom and liberties.