For Immediate Release
Office of the First Lady
December 4, 2006

MRS. BUSH: Thank you, President DeGioia. Thank you for that very kind introduction. I'm so happy to have this chance to be here. Thank you all for hosting this event of the U.S.-Afghan Women's Council. It's two of my favorite groups -- the Afghan American Women's Council that I've been involved with and paid a lot of attention to, ever since it was founded, and, in fact, had the chance to accompany women who -- on my one trip to Afghanistan, the first time I got to go to Afghanistan, I went with our Afghan American Women's Council, and that was really great fun to have the opportunity to be with them. 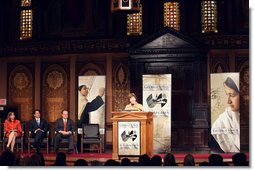 I want to recognize also Secretary Elaine Chao, who is here. Thank you so much, Madam Secretary, for being a part of it. Under Secretary of State for Democracy and Global Affairs, Dr. Paula Dobriansky -- Paula has been absolutely vital to this partnership between the United States government and the government of Afghanistan, and the women of both the United States and Afghanistan. Thank you for that important work. (Applause.)

And of course, Ambassador Jawad, thank you very, very much for the service to your country and for your friendship that you promote between our country and your country. And to Shamim Jawad, who is here on the front row, I want to recognize you, too. Thank you for everything that you do. (Applause.)

I think out in the crowd, although I really can't see because I'm sort of blinded by the lights, but I want to recognize the Georgetown faculty, the administrators, and the students who have joined us today, and the members of the U.S.-Afghan Women's Council. Thank you all, each one of you, for coming.

I'm delighted to be with you today as we begin a new chapter for the U.S.-Afghan Women’s Council, and a new phase of the partnership between the United States and Afghanistan.

Since 2001, our countries have joined to help the Afghan people recover from decades of conflict and oppression. Over the last five years, the American people, through the United States government, have contributed more than $10.3 billion to help Afghanistan’s reconstruction. In Afghanistan, courageous men and women are working every single day to build a stable and a democratic society for themselves. More than seven million Afghans now have access to health care. Almost six million children -- including two million girls -- are in school now in Afghanistan. Millions of Afghans have voted in two peaceful and democratic elections.

Through the cooperation between our countries, fields have been replanted, roads and homes have been rebuilt, and hopes for a peaceful, prosperous, free Afghanistan have been restored.

Especially impressive are the strides made by the women of Afghanistan. Afghan women now serve as government ministers and lead as provincial governors. Eighty-five women have been elected or appointed to the National Assembly. Afghan women work as entrepreneurs and educators, as farmers and freedom activists. They're lawyers and literacy advocates, college graduates and community health workers. Women are now reclaiming their place with men at the center of Afghan society.

American women care deeply about their sisters, the women of Afghanistan. One way we’re helping is through the U.S.-Afghan Women’s Council, which President Bush and President Karzai launched in January 2002. The Council brings together the governments of Afghanistan and the United States -- and organizations from across the private sector -- to ensure that Afghan women can participate in the political, economic, and civil life of their country.

Council initiatives benefit citizens throughout Afghanistan. Women judges and lawyers are being educated about Afghanistan's new constitution and civil rights. Hundreds of midwives are being trained to help reduce the country’s high maternal mortality rate.

Council initiatives improve economic opportunities for Afghan women. Microcredit loans have been extended to Afghan entrepreneurs, and Afghan women have attended graduate-level business seminars in the United States. One Council program, Arzu, Inc., sells traditional rugs woven by Afghan women, giving them a job so they can support themselves and their families. Arzu rugs can now be seen in homes around the world, including mine -- that's the White House. (Laughter.)

We all know, though, that the success of all peoples begins with education. By investing in education, Afghanistan can help its citizens enjoy greater opportunity, prosperity, and better health.

The United States-Afghan Women’s Council is committed to improving education for all the people of Afghanistan. Last year, I visited the Women’s Teacher Training Institute in Kabul, established by the Council in partnership with the government of Afghanistan and USAID. At the institute, women and men can come to study to be teachers, and women have a safe dorm to stay in while they're being trained. Then they go back home and train more teachers in a cascading effect, with the goal of getting many, many trained teachers into schools all over Afghanistan, and opening and staffing schools as fast as possible.

The Council also supports a program at the University of Nebraska, Omaha, that brings Afghan teachers to the United States, to the University of Nebraska. They come, they stay with families, Omaha families, and they study there at the Afghanistan Teacher Education Project, which helps these teachers develop their English language and computer skills. And, at the same time, these educators learn how to train more people when they return home to become teachers. By the end of this year, more than 100 alumni of the program will have trained hundreds of local teachers at workshops throughout Afghanistan.

Just last week, I met with the most recent class of the Teacher Education Project of the White House. I've met with every class, I think, and I really love the opportunity to talk with them. Usually this is on their way home, after they've spent a semester in Omaha. I love to hear about the families that they stay with. You can imagine the solid character of these people in Nebraska who offer their homes to women from Afghanistan.

When I just met last week with the women who were returning home, they spoke with excitement about their opportunity to go back home to Afghanistan and share with their colleagues the lessons they've learned here in the United States.

From its home at the State Department, the U.S.-Afghan Women's council has accomplished a lot over the last four years. But even more work remains. For the Council to succeed in the long term, it must become a sustainable institution independent from the federal government. Council members have much to offer Afghanistan, in both ideas, expertise and resources. And it's important that they can continue this work over the long term.

Today I'm delighted to announce that the U.S.-Afghan Women's Council will partner with Georgetown University to establish a permanent home for the Council. While the U.S. State Department and the Afghan government will still support Council initiatives, today begins a two-year transition that will fully integrate the Council into the Georgetown community.

The Council can benefit from the University’s strong commitment to Afghanistan. Georgetown has already hosted conferences in Kabul, London, and Washington, gathering leaders from around the world to address the challenges of reconstruction. The University has created fellowship programs for Afghan students, so that they can study in the United States and return to Afghanistan prepared to be the new leaders of their country. Georgetown has long supported the U.S.-Afghan Women’s Council, and now will contribute even more through the expertise that is offered by its distinguished scholars and academic centers.

This new partnership will expand and improve the U.S.-Afghan Women’s Council. It will increase the ties between America’s private sector institutions and the people of Afghanistan. And it will strengthen the friendship between our two countries. With the support of Georgetown, the Council will work to improve the lives of even more women in Afghanistan -- women like Hasina Mojadidi.

I met Hasina in New York this September at the White House Conference on Global Literacy, which I hosted with UNESCO. At the conference, panelists from around the world spoke about the difference literacy instruction and education is making in their countries.

One of these panelists was Hasina. Hasina was a university student in Kabul when she was forced to abandon her education. For years she was house-bound, prohibited from reading even the most simple newspaper articles or books. Hasina says that during those long years, she missed reading so much that she would collect whatever scraps of newspaper or package-wrapping came into her home, just so she could look at the words printed across them.

When the prohibition was lifted against women's education, Hasina reenrolled in the university. She earned a degree in literature. Today she's a director of Afghanistan’s “Learning for Life” program, an initiative supported by the U.S.-Afghan Women’s Council as part of the Women’s Teacher Training Institute. Through “Learning for Life,” Hasina is helping rebuild her country by teaching other women how to read.