For Immediate Release
Office of the Press Secretary
November 23, 2006


The President made telephone calls this morning to members of the Armed Forces who are stationed at remote overseas locations, or who have recently returned from overseas, to wish them a Happy Thanksgiving and thank them for their service to our Nation. 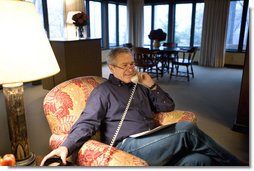 Corporal Steven Lanham Jr., USMC
Corporal Steven Lanham Jr., USMC, is a member of the 3d Reconnaissance Battalion, 3d Marine Division, in Okinawa, Japan. As a team leader for the 3d Platoon, Alpha Company, he is responsible for scouting and patrolling, and is skilled in assault weaponry, breaching demolitions, close quarter battle, and raid techniques. He is also qualified as a combatant diver.

Seaman Fredrick DeJuan Lamar, USCG
Seaman Fredrick DeJuan Lamar, USCG is based on the USCG CUTTER MUNRO, which resides currently in its home port of Alameda, CA. As a member of the Weapons division his duties include: helmsman, lowering the ship's small boats, and .50 caliber gunner. He was nominated as Sailor of the Quarter for August-October 2006.