For Immediate Release
Office of the Press Secretary
November 21, 2006

Laura and I are honored to be with you. We're honored to say thanks on behalf of a grateful nation. And I'm pleased to tell you that the work you're doing will lead to peace for generations to come. 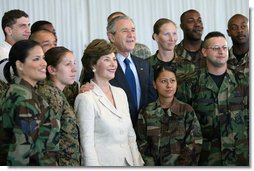 You serve at a time when we witness an ideological struggle between those who love freedom and those who hate freedom. And the outcome of this struggle will determine how your children and grandchildren live. And I'm determined, like you are determined, that freedom prevails.

Today we saw again the vicious face of those who oppose freedom. We strongly condemn the assassination today in Lebanon of Pierre Gemayel, who was a minister in the government of Prime Minister Siniora. We support the Siniora government and its democracy, and we support the Lebanese people's desire to live in peace. And we support their efforts to defend their democracy against attempts by Syria, Iran and allies, to foment instability and violence in that important country.

I call for a full investigation of the murder to identify those people and those forces behind the killing. We call on the international community to support Prime Minister Siniora's government. And one clear way to do so is for the United Nations Security Council to take all remaining steps needed to establish a special tribunal concerning the assassination of former Prime Minister Hariri, and to assure that those behind that killing and others that followed are brought to justice. I strongly believe the United Nations Security Council ought to act today. For the sake of peace, the free world must reject those who undermine young democracies and murder in the name of their hateful ideology.

I want to thank our Secretary of State for joining us. You know, one of the jobs of the President is to surround himself with smart, capable, strong people -- and I have done so in Condoleezza Rice. (Applause.)

I also did so at the altar. (Laughter.) And I'm pleased Laura is here, as well. (Applause.) We're on our way back home after a trip in Southeast Asia. I had meetings in Singapore and Indonesia, as well as a meeting at the Asia Pacific Economic Cooperation in Vietnam. And they're important meetings. It gave me a chance to discuss with leaders from the Pacific region about our common threats -- the common threat of terrorism, the common threat of pandemic outbreaks, and the common threat of North Korea's nuclear weapons program.

I told them that the United States of America remains committed to Asia because we have key economic and national security interests in the region. It's in our national interests that we be involved in the Asia Pacific region. And the Pacific Command bares the primary responsibility for defending our interests in that part of the world. You represent the oldest and largest unified command in the United States military. You cover an area that spans more than half of the surface area of the Earth. You've got a really important job, and I'm here to thank you for doing a good job. 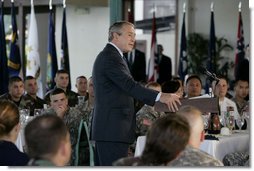 Earlier this year, the Pacific fleet conducted one of the largest multinational maritime exercises in the world, involving eight nations, 35 ships, 180 aircraft, and 19,000 personnel. You serve freedom's cause when you help others be able to defend themselves. You serve freedom's cause when you help young democracies fight off the extremists who try to impose their hateful vision of the world. What happens in Asia Pacific matters to America's security here at home.

The Air Force has brought humanitarian aid to victims in earthquakes and typhoons. You provided airlift support to places like East Timor. The Coast Guard works closely with China as part of an effort to improve enforcement of laws against maritime drug traffickers.

Some of the troops from this command who were deployed to combat operations in Iraq and Afghanistan didn't come home. We remember their courage. We pray for their families and loved ones left behind, and we resolve to honor their sacrifice by completing the missions for which they gave their lives.

The men and women who wear the uniform are the best that America has to offer. You belong to the finest Armed Forces the world has ever known. I appreciate the fact that you have volunteered to wear our uniform in these troubled times, that you have volunteered knowing the dangers into which you might be sent. It's an incredible country when people of character stand up and say, I want to serve something greater than my self-interests.

I want to thank you for your sacrifice. I particularly thank your families for joining you in this noble cause. We'll succeed, and when we do, generations of Americans will look back on this period and say, thank God the United States had such men and women of character at the beginning of the 21st century. 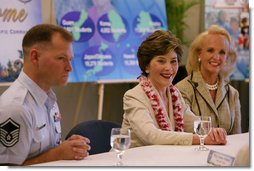