For Immediate Release
Office of the Press Secretary
November 19, 2006

PRESIDENT BUSH: Today, Vladimir and I are pleased to report that after a long set of negotiations, Representative Gref and Ambassador Schwab have signed agreements that will be good for the United States and good for Russia -- and that is we support Russia's accession into the WTO. I congratulate you all for your hard work and thank you very much for your hard work. 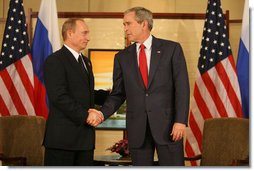 As usual, we've had a very important dialogue. And we talked about common interests and how we can work together to solve some of the world's problems, including North Korea and Iran. And I want to thank you for your time and friendship.

PRESIDENT PUTIN: (As translated.) On my part, I would like to add that we've been in the process of difficult and lengthy work, five years of intense effort which has been culminated today with the signing of a protocol on Russia's accession to the World Trade Organization, which has been a successful outcome of this effort.

And I would like to underscore that this would not have been possible to achieve without expert and professional involvement both on the side of the U.S. and Russia, and without good will expressed in this -- should I say, in the right term would be to use here -- very businesslike approach in their dealing.

On top of that, it would not have been possible without a political will, which has been here expressed by the President of the United States of America. And I agree with you, George, that this lays out very favorable conditions to us to jointly tackle the very pertinent and acute problems of international relations together.

It also lays out favorable conditions to further develop the scope and volume of commerce and economic interaction between the business partners between our two countries involved with other countries.