For Immediate Release
Office of the Press Secretary
November 19, 2006

PRESIDENT HU: (As translated.) It's a great pleasure to see you again, Mr. President. I remember, in the course of this year we have already met each other three times, we had four telephone conversations, and we also maintained frequent exchange of letters. So it is fair to say that we are keeping very close touch and this has vigorously promoted China-U.S. relations. 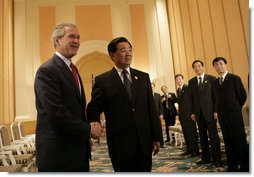 I'm pleased to see new progress in China-U.S. relations since our meeting in St. Petersburg in July this year. Our two countries have maintained a frequent exchange of visits at the top level and at different levels. And actually, our trade has also been expanding very rapidly, and I do have a piece of good news to share with you. According to U.S. statistics, in the first seven months of this year, U.S. exports to China jumped 35 percent.

Nationally, our mechanism for having strategic economic dialogue has also been launched, and the first inaugural dialogue will be held in Beijing around the middle of next month. And Chinese naval ships have again paid a visit to the continental America for the first time in six years. And even as we speak our naval ships of the two countries are conducting joint search and rescue maneuvers in Chinese waters.

So, all in all, we feel very happy about the healthy and stable expansion of China-U.S. relations. I think we would not have achieved such a state of our bilateral relations had it not been for your outstanding leadership.

PRESIDENT HU: So, with this, I would like to turn it over to you.

PRESIDENT BUSH: Thank you, Mr. President. You're right, you and I have had a lot of meetings. And the reason why is because we recognize that working together we can accomplish a lot for the security of the world and for the prosperity of our people. China is a very important nation, and the United States believes strongly that by working together, we can help solve problems, such as North Korea and Iran.

Our bilateral relations are very good, and we -- you and I are committed to keeping them that way. Obviously, with as much commerce between our countries as there is, there's going to be trade difficulties, but nevertheless, we both adopt a spirit of mutual respect and the desire to work through our problems for the common good of our peoples.

I strongly support your vision, Mr. President, of encouraging your country to become a nation of consumers and not savers, which will inure to the benefit of our manufacturers, both large and small, and our farmers, as well.

I always enjoy our frank and friendly discussions, and I'm looking forward to this one, as well. And I thank you for your hospitality. 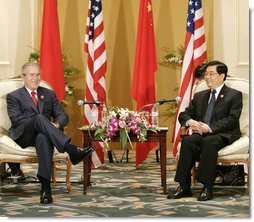