For Immediate Release
Office of the Press Secretary
November 13, 2006

PRESIDENT BUSH: Mr. Prime Minister, welcome back to Washington. The Prime Minister and I had a fascinating discussion the last time he was here. We were sitting on the Truman Balcony. We spent probably an hour-and-a-half strategizing about how we can work together to achieve peace. Our conversation today continued this -- that important dialogue. 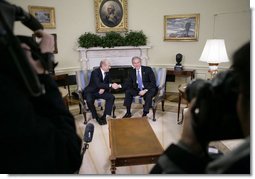 But the whole central thrust of our discussions was based upon our understanding that we're involved in an ideological struggle between extremists and radicals versus people who just simply want to live in peace, and that as democracies we have an obligation, obviously, to listen to the will of our people, but at the same time, work together to help those who want to live in a peaceful society achieve their ambitions.

Mr. Prime Minister, it has been a delight to be with you again. Welcome back.

PRIME MINISTER OLMERT: Thank you very much. President -- this is nothing to take an edge to the very accurate analysis that you made with regard to these big issues. We in the Middle East have followed the American policy in Iraq for a long time, and we are very much impressed and encouraged by the stability which the great operation of America in Iraq brought to the Middle East. We pray and hope that this policy will be fully successful so that this stability which was created for all the moderate countries in the Middle East will continue.

We shared thoughts about the Iranian threat. There is no question that the Iranian threat is not just a threat for Israel, but for the whole world. The fanaticism and the extremism of the Iranian government, and the fact that the leader of a nation such as Iran can threaten the very existence of another nation, as he does towards the state of Israel, is not something that we can tolerate or would ever tolerate, and certainly not when we know that he is trying to possess nuclear weapons. And I'm very encouraged by our discussion and thoughts that we have exchanged about what needs to be done in the Middle East.

Finally, I say time and again, on different occasions, that we want to open a serious dialogue with the Chairman of the Palestinian Authority. And I will make every possible effort to help Abu Mazen to get into such a dialogue with us. Indeed, we hope that the new government will be established soon on the basis of the Quartet and the road map, and that will allow an immediate contact between him and me that I'm sure will lead to extend this negotiation process. 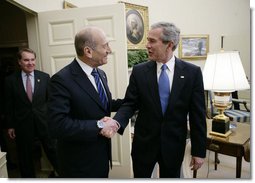 Again, Mr. President, it's always a great joy to be with Your Excellency. And I always thank you for your friendship -- your personal friendship, and even more important, your friendship for the state of Israel.

And so we had a really good discussion. I'm not sure what the report is going to say. I'm looking forward to seeing it. I believe this: I believe that it's important for us to succeed in Iraq, not only for our security, but for the security of the Middle East, and that I'm looking forward to interesting ideas. In the meantime, General Pete Pace is leading investigations within the Pentagon as to how to reach our goal, which is success, a government which can sustain, govern, and defend itself, and will serve as an ally in this war on terror.

I believe it is very important, though, for people making suggestions to recognize that the best military options depend upon the conditions on the ground.

And so it's an interesting period here in Washington, Mr. Prime Minister. You might realize the opposition party won, won the Senate and the House. And what's interesting is, is that they're beginning to understand that with victory comes responsibilities. And I'm looking forward to working with the Democrats to achieve common objectives.

Q Mr. President, do you see any change in the administration's position regarding Syria? Do you support the resumption of Israeli-Syrian negotiations? And the same question to the Prime Minister, if I may. In the past, you rejected the resumption of the Syrian and Israeli negotiations under -- one of the reasons was the rejection of the American administration regarding the policies of Syria. Do you see now, after you discuss this matter with the President, any change in your position regarding Syria?

PRESIDENT BUSH: My answer to your question is, Prime Minister Olmert knows how to run his own foreign policy. And he can figure out his -- he can figure out his policy towards them. My policy towards Syria is this: that we expect the Syrians to be, one, out of Lebanon so that the Lebanese democracy can exist; two, not harboring extremists that create -- that empower these radicals to stop the advance of democracies; three, to help this young democracy in Iraq succeed. And the Syrian President knows my position. We have told that to him through my administration. We do have an embassy there in Syria. But our position is very clear, and we would like to see some progress toward peace from the Syrians.

PRIME MINISTER OLMERT: I share the same opinion with President Bush. We are not against negotiations with Syria. We would love to be able to have negotiations with Syria, but that must be based on a certain reasonable, responsible policy, which is not preformed by Syria for the time being. Everything that they are doing is to the other direction -- in Lebanon, in Iraq, and the sponsorship of Hamas and Khalid Mashal as the main perpetrators of terror against the state of Israel. With some changes in the Russian -- I'm sorry, in the Syrian attitude on these major issues, I hope that one day the conditions for contacts between them and us will be created. But to be honest, I don't think at the present time they manifest any such attitude. And that makes it impossible.

Q Yes, Mr. President, Tony Blair today is going to be calling for a reaching out to both Syria and Iran to help calm the situation in Iraq. What is your response to that?

PRESIDENT BUSH: I haven't seen his comments, but you just heard my response on Syria. And my comments on Iran is this: if the Iranians want to have a dialogue with us, we have shown them a way forward, and that is for them to verify -- verifiably suspend their enrichment activities. We put that proposal on the table awhile back. We said that if you want to have a dialogue with us, we're willing to come to the table with the EU, as well as Russia and China, to discuss a way forward. But first, you must verifiably suspend your enrichment activities.

Our focus of this administration is to convince the Iranians to give up its nuclear weapons ambitions. And that focus is based upon our strong desire for there to be peace in the Middle East. And an Iran with a nuclear weapon would be a destabilizing influence. And so we have made it very clear, our position regards Iran, and it hasn't changed.

Q Mr. President, do you think that it's better to impose sanctions on Iran or to handle dialogue with them? (Speaking Hebrew.)

PRESIDENT BUSH: I think it's very important for the world to unite with one common voice to say to the Iranians that, if you choose to continue forward, you'll be isolated. And one source of isolation would be economic isolation. In other words, there has to be a consequence for their intransigence. They have -- we went to the United Nations, we made it very clear -- we, being a lot of the world -- have made it clear that the Iranian nuclear weapons ambitions are not in the world's interest. And therefore, if they continue to move forward with a program, there has to be a consequence. And a good place to start is working together to isolate the country.

And my hope is, is that there are rational people inside the government that recognize isolation is not in their country's interest. And I also, when I speak about Iran, speak about a government, not about the Iranian people. I believe the Iranian people want a better way forward. I don't think they want to confront the world. I believe they need -- I believe they could benefit by more trade and more openness with the world. But their leaders have to make the decision, and the decision is abundantly clear to them. And I say this in the interest of world peace, that if Iran has a nuclear weapon, it will be incredibly destabilizing and obviously threatening to our strong ally.

And so my attitude is let's work in concert to convince the government that it's not just the Israeli voices speaking, or the United States' voices speaking, but there's a lot of other voices saying the exact same thing, and present them with a choice.

MR. DECKARD: Thank you all.

PRESIDENT BUSH: Wait a minute. That seems a little unfair. He's got a strong answer coming, I can feel it. (Laughter.)

PRIME MINISTER OLMERT: She said it in Hebrew, and you can blame him, he didn't understand the Hebrew part of the question. I'll answer in Hebrew for the Israeli voters.

And again, I want to thank you, President Bush, for being so gracious to me and to the state of Israel.

PRESIDENT BUSH: Proud to have you here.