For Immediate Release
Office of the Press Secretary
November 13, 2006

THE PRESIDENT: Thank you all very much. I'm honored to join you today in today's ceremony. I'm proud to dedicate this piece of our Nation's Capital to the lasting memory of a great man.

We have gathered in tribute to Dr. Martin Luther King, to the ideals he held and to the life he lived. Dr. King showed us that a life of conscience and purpose can lift up many souls. And on this ground, a monument will rise that preserves his legacy for the ages. Honoring Dr. King's legacy requires more than building a monument; it required the ongoing commitment of every American. So we will continue to work for the day when the dignity and humanity of every person is respected, and the American promise is denied no one. 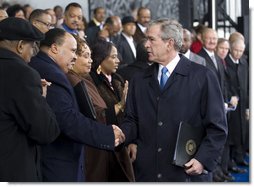 This project has been over a decade in the making, and I thank those who have worked to bring about this day. I particularly want to thank my predecessor, the man who signed the legislation to create this memorial, President Bill Clinton. (Applause.) It sounds like to me they haven't forgotten you yet. (Laughter.) He's become, as you know, my fourth brother. (Laughter.)

I want to thank Harry Johnson. I appreciate the members of my Cabinet who are here. I welcome the members of Congress. I thank my Mayor, Tony Williams, who is here. I'm proud to be with the members of the King family. I thank the representatives of the community and civil rights groups who have joined us. I thank the Martin Luther King, Jr. National Memorial Project Foundation board members and executive cabinet. Most of all, thank you all for coming. (Applause.)

Our Declaration of Independence makes it clear that the human right to dignity and equality is not a grant of government. It is the gift from the Author of Life. And Martin Luther King considered the Declaration one of America's great, as he called it, "charters of freedom." He called our founders' words, "a promise that all men -- yes, black men, as well as white men -- would be guaranteed the unalienable right of liberty, life, and the pursuit of happiness."

Throughout Dr. King's life, he continued to trust in the power of those words, even when the practice of America did not live up to their promise. When Martin Luther King came to Washington, D.C. in the summer of 1963, he came to hold this nation to its own standards, and to call its citizens to live up to the principles of our founding. He stood not far from here, on the steps of the Lincoln Memorial. With thousands gathered around him, Dr. King looked out over the American capital and declared his famous words, "I have a dream."

His dream spread a message of hope that echoed from his hometown of Sweet Auburn, Georgia, to the pulpit of Dexter Avenue Baptist Church, to the Edmund Pettus Bridge. An assassin's bullet could not shatter the dream. Dr. King's message of justice and brotherhood took hold in the hearts of men and women across the great land of ours. It continues to inspire millions across the world. 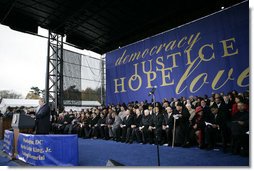 The memorial will reflect the arc of Dr. King's life, his search for justice, and the enduring beauty of his words. The memorial will include a wall where visitors can read passages from Dr. King's sermons and speeches through a stream of water. And on the banks of the Potomac, visitors will walk from the Mountain of Despair to the Stone of Hope, where Dr. King's image is rendered.

Today we see only these open acres, yet we know that when the work is done, the King Memorial will be a fitting tribute, powerful and hopeful and poetic, like the man it honors. As we break ground, we remember the great obstacles that Dr. King overcame and the courage that transformed American history. The years of Martin Luther King's life were tumultuous, difficult, and an heroic time in the life of our country. Across our nation, African Americans faced daily cruelties and pervasive wrongs. In 1955, a woman, Rosa Parks, challenged these wrongs on a bus in Montgomery, Alabama, when she refused a driver's order to give her seat to a white man. Her act of defiance inspired a young Baptist minister and changed our nation forever.

Within days of Rosa Parks' lonely protest, Dr. King helped organize a boycott that captured the attention of our country. When Dr. King's leadership -- with Dr. King's leadership, the boycott forced America to confront the glaring contradiction between the sign on the bus and the words of our Declaration of Independence. And on this date, exactly 50 years ago, the Supreme Court ruled the segregation of public buses unconstitutional. And so today we celebrate the courage that won victories and helped spark one of the greatest movements for equality and freedom in American history.

Eventually, the civil rights movement would succeed in persuading Congress to pass sweeping legislation that represented a new founding for our nation. On July 2, 1964, President Johnson signed the Civil Rights Act at the White House. As of that date, no longer could weary travelers be denied a room in a hotel, or a table at a restaurant on account of their race. And no longer could any American be forced to drink from a separate water fountain, or sit at the back of the bus just because of their race. 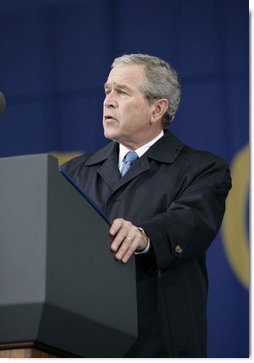 Dr. King liked to say that our Civil Rights Act was written in the streets by citizens who marched for the idea that all men are created equal. He was right; yet there is no doubt that the law came as it did when it did because of the courage and leadership of Martin Luther King.

As we break ground, we recognize our duty to continue the unfinished work of American freedom. America has come a long way since Dr. King's day; yet our journey to justice is not complete. There are still people in our society who hurt, neighborhoods are too poor. There are still children who do not get the education they need to fulfill their God-given potential. There's still prejudice that holds citizens back. And there's still a need for all Americans to hear the words of Dr. King so we can hasten the day when his message of hope takes hold in every community across our country.

Dr. King was on this Earth just 39 years, but the ideas that guided his work and his life are eternal. Here in this place, we will raise a lasting memorial to those eternal truths. So in the presence of his family, his coworkers in freedom's cause, and those who carry on his legacy today, I'm proud to dedicate this ground on behalf of the American people as the site of the Martin Luther King, Jr. Memorial. May God bless you all. (Applause.)