For Immediate Release
Office of the Press Secretary
November 11, 2006

PRESIDENT BUSH: Thank you. Thanks for coming. Secretary Nicholson, thank you for your kind words and for your leadership. Members of the Cabinet, Members of Congress, members of the United State military, all veterans, all volunteers who have sworn to uphold the security of the United States, I thank your families for being here and I thank our veterans. I am proud to join you on this day of honor. 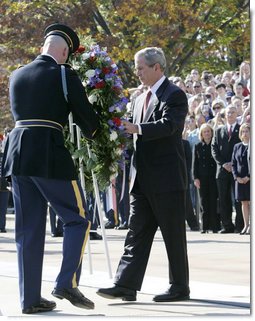 On this day, in this month, at this hour, our nation remembers the moment when the guns of World War I went silent -- and we recognize the service and the sacrifice of our nation's veterans. From Valley Forge to Vietnam, from Kuwait to Kandahar, from Berlin to Baghdad, our veterans have borne the costs of America's wars -- and they have stood watch over America's peace. The American people are grateful to the veterans and all who have fought for our freedom.

Since the presidency of Abraham Lincoln, the National Cemetery has reminded our citizens of the cost of liberty. The simple white markers testify to honor fulfilled and duty served. Most of these markers stand over graves of Americans who came home to enjoy the peace they earned. Too many stand over the graves of those who gave their lives to protect that peace. This day is dedicated to all who answered the call to service -- whether they live in honor among us, or sleep in valor beneath this sacred ground.

On this Veterans Day, we give thanks for the 24 million Americans who strengthen our nation with their example of service and sacrifice. Our veterans are drawn from many generations and from many backgrounds. Some charged across great battlefields. Some fought on the high seas. Some patrolled the open skies. And all contributed to the character and to the greatness of America.

On this Veterans Day, we honor a new generation of men and women who are defending our freedom. Since September the 11th, 2001, our Armed Forces have engaged the enemy, the terrorists on many fronts. At this moment, more than 1.4 million Americans are on active duty, serving in the cause of freedom and peace around the world. They are our nation's finest citizens. (Applause.) They confront grave danger to defend the safety of the American people. They've brought down tyrants, they've liberated two nations, they have helped bring freedom to more than 50 million people. Through their sacrifice, they're making this nation safer and more secure -- and they are earning the proud title of veteran. (Applause.)

On this Veterans Day, we're humbled by the strong hearts of those who have served. Last week, Secretary Nicholson told me about a visit he made to New York City where he met a group of veterans who lost limbs in this war. Secretary Nicholson asked them how they could keep their spirits up. One man answered, "Sir, it is because we feel the American people are so appreciative of our service." Many of our veterans bear the scars of their service to our country - and we are a nation that will keep its commitments to those who have risked their lives for our freedom. That young man was right -- we do appreciate the service of those who wear our uniform. (Applause.) 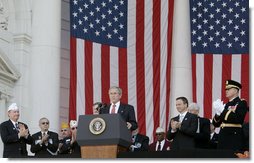 To help Americans show our appreciation to those who have served, Secretary Nicholson has asked all our nation's veterans to wear their medals today. I urge our citizens to go up to those men and women and shake a hand and give a hug, and give a word of thanks. I ask you to consider volunteering at a veterans hospital or a nursing home. I encourage you to work with your local veterans group to help support our troops in the field -- and their families here at home.

As we raise our flag and as the bugle sounds taps, we remember that the men and women of America's Armed Forces serve a great cause. They follow in a great tradition, handed down to them by America's veterans. And in public ceremonies and in private prayer, we give thanks for the freedom we enjoy because of their willingness to serve. (Applause.)